The company, whose owners fund the Tea Party, has used bribery and ignored environmental regulations 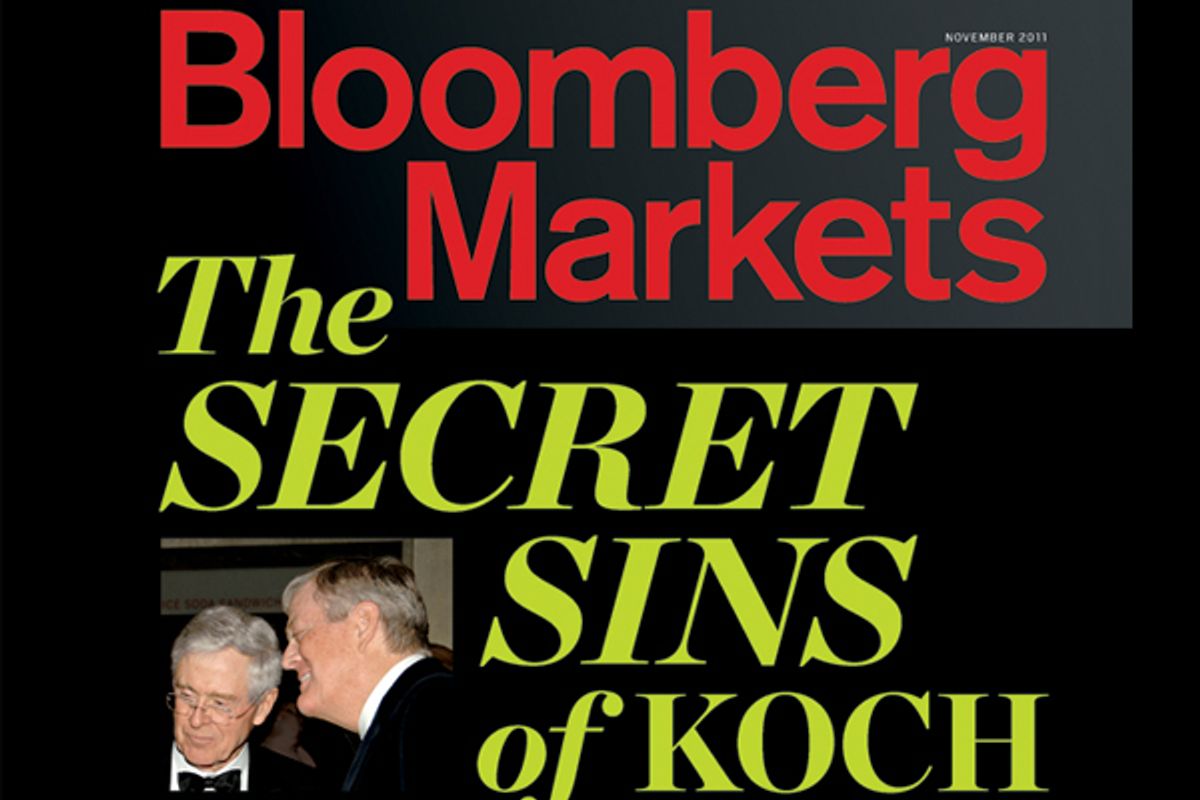 The cover of the new edition of Bloomberg Markets magazine. (Bloomberg)
--

Bloomberg Markets Magazine has published the piece that was the subject of all that pre-publication spin by Koch Industries, the huge private conglomerate that is the source of wealth for right-wing funders Charles and David Koch.

The piece, written by Asjylyn Loder and David Evans and featured on the cover of the new edition of the magazine, runs to more than 7,000 words. But here's the basic thrust:

What many people don’t know is how the Kochs’ anti-regulation political ideology has influenced the way they conduct business.

A Bloomberg Markets investigation has found that Koch Industries -- in addition to being involved in improper payments to win business in Africa, India and the Middle East -- has sold millions of dollars of petrochemical equipment to Iran, a country the U.S. identifies as a sponsor of global terrorism.

For six decades around the world, Koch Industries has blazed a path to riches -- in part, by making illicit payments to win contracts, trading with a terrorist state, fixing prices, neglecting safety and ignoring environmental regulations. At the same time, Charles and David Koch have promoted a form of government that interferes less with company actions.

Reading the piece, it becomes pretty clear why Koch was so aggressive in trying to discredit Bloomberg (through leaks to friendly conservative outlets) before the article was even published.

The magazine uncovered, for example, a 2008 letter in which Koch Industries described bribes paid by a French subsidiary for contracts as "violations of criminal law." And it reports on a '90s-era case in which a Koch employee says she was asked to falsify data on a report about emissions of a carcinogenic chemical from a company refinery in Texas.

Besides the intense interest in the Kochs' role in financing the Tea Party, the fact remains that Koch Industries is one of the largest private companies in the world, and one that is known for prizing secrecy. That fact alone makes it worthy of scrutiny.

The piece is very much worth a read.