The protest has its roots in the 1700s, when people stood up to the elites of their day: the Founding Fathers 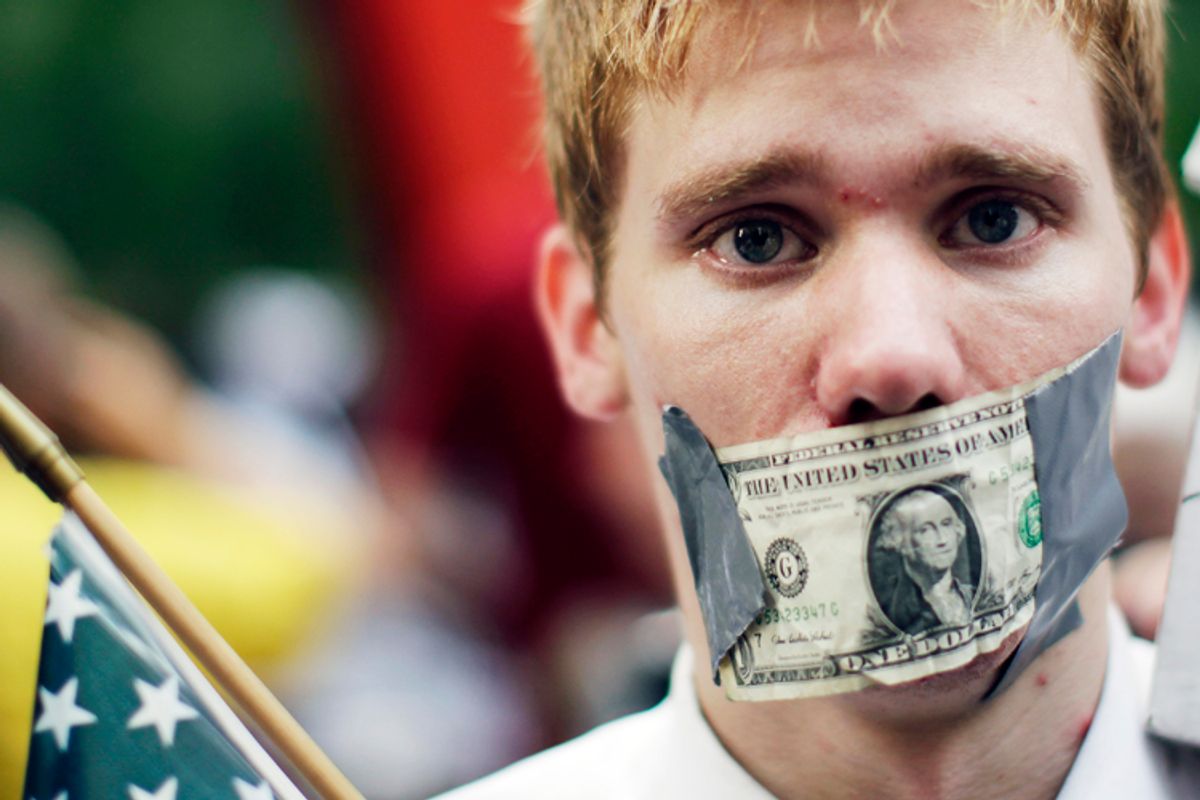 A demonstrator from the Occupy Wall Street campaign stands with a dollar taped over his mouth as he stands in Zucotti Park near the financial district of New York September 30, 2011. (Lucas Jackson / Reuters)
--

Given some of my key subjects, I can’t help but be interested in the “occupy” movement that, at the moment, has hundreds of protesters more or less living in Zuccotti Park near the New York Stock Exchange in lower Manhattan for the past three weeks, and is apparently sparking similar protests in other cities. Until some 700 people were arrested over the weekend, you couldn't find out much about this action via "mainstream media," and much of the left media, such as it is, has been critical in some cases, and outright dismissive in others, regarding the movement’s evident formlessness and absence of specific goals.

That absence was pretty much undeniable. Still, in Salon, Glenn Greenwald has shrewdly criticized liberal-Democrat scorn for Occupy Wall Street. On the other hand, Mother Jones criticizes the movement on bases other than those that Greenwald attacks....

But I write about the deep, founding roots of rowdy, American populist protest and insurrection, often visionary and even utopian, yet informed and practical too, specifically over money, credit, and the purpose and nature of public and private finance. And despite my pop-narrative books on the subject, and despite my articles here, and in such place as Newdeal20.org (articles picked up by AlterNet, Huffington, Salon, Naked Capitalism and others), key indicators of my relative impact (like royalty statements!) give me a sneaking suspicion that most people still don’t connect the American founding period with a rugged drive on the part of ordinary people for equal access to the tools of economic development and against the hegemony of the high-finance, inside-government elites who signed the Declaration and framed the Constitution and made us a nation.

Sometimes people even ascribe democratic ideas to the famous upscale American Revolutionaries, who to a man actually hated democracy and popular finance. Thomas Paine, the exception, was ultimately rebuked and scorned by all of the others.

The difficulty in dealing with our founding battle for democratic economics arises in part because the movement was not against England but against the very American banking and trading elites who dominated the resistance to England. That complicates our founding myth, possibly unpleasantly. Also, it was a generally losing battle. With ratification of the Constitution, Hamiltonian finance triumphed, and people looking to Jefferson and Madison for finance and economic alternatives to Hamilton are barking up the wrong tree, since what those men knew, or even really cared, about finance could be written on a dime. (Anyway, in pushing for creating a  nation, Madison supported Hamiltonian finance down the line. Their differences came later.) When Occupy Wall Street protesters say “It’s We the People!”  they’re actually referring to a preamble, intending no hint of economic democracy, to a document that was framed specifically to push down democratic finance and concentrate American wealth for national purposes. Not very edifying, but there it is.

The Tea Party, meanwhile, has taken up founding economic issues from a right-wing point of view, associating itself with the upper-middle-class Boston patriots (often mistaken for populist democrats) who led a movement against overrreaching British trade acts in the 1760′s and were important to the impulse toward American independence. I’ve written fairly extensively about where and how I think the Tea Party goes wrong on the history of the founding period. But at least they’re framing their objections to current policy, and framing the historical roots of their ideas, not mainly in cultural but in economic terms.

Like it or not, though, it is Occupy Wall Street that has the most in common, ideologically, not with those Boston merchants and their supporters but with the less well-known, less comfortably acknowledged people who, throughout the founding period, cogently proposed and vigorously agitated for an entirely different approach to finance and monetary policy than that carried forward by the famous founders. Amid horrible depressions and foreclosure crises, from the 1750′s through the 1790′s, ordinary people closed debt courts, rescued debt prisoners, waylaid process servers, boycotted foreclosure actions, etc. (More on that here and here.) They were legally barred from voting and holding office, since they didn’t have enough property, so they used their power of intimidation to pressure their legislatures for debt relief and popular monetary policies. Their few leaders in legit politics included the visionary preacher Herman Husband, the weaver William Findley, and the farmer Robert Whitehill.

They had high hopes for American independence. In the 1770′s, their “out-of-doors” collaboration with the famous elites was critical to enabling the Declaration of Independence — even though none of their names appears there (well, Benjamin Rush’s does, but by then he’d become unradicalized). Their democratic, egalitarian hopes dashed, in the 1780′s, in western Massachusetts, they marched on the state’s armory in Springfield to reverse regressive finance policies that had again plunged ordinary people into debt peonage and foreclosure while bailing out rich creditors (elites called that populist action, reductively, Shays’s Rebellion). In the 1790′s, with the Constitution in force, and Hamilton’s economics the law of a powerful new nation (partly in direct reaction to the Shays action), populists took over the militia and debt-court system throughout western Pennsylvania and western counties of neighboring states, flew their own flag, and tried to secede from the United States and form an economically egalitarian country. Hamilton dubbed that action, again in a successful effort to reduce it, the Whiskey Rebellion, and he and President Washington responded, naturally enough, by occupying western Pennsylvania with federal troops.

It is my possibly vain hope that reading up on such historical matters might inspire efforts like Occupy Wall Street to greater cogency and a deeper, more solid foundation in longstanding (if embattled and problematic) American values than they now seem to possess. You don’t have to look as late as the 19th-century Populists and the 1930′s labor movement, for example, to find an American left deeply immersed in both economic issues and an ambitious vision of a better country. Those things were present at the creation.

Occupy Wall Street probably doesn’t, when you shake it down, want to secede from the union like the whiskey rebels — happily enough. But those rebels didn’t start out by wanting to secede, either; they’d fought in the awful front lines of the Revolution in hopes that those sacrifices might lead to something for them and their families; it didn’t. Occupy Wall Street does seem to want to secede, somehow, from the hopeless-feeling regurgitation, through the two political parties, of elite finance theories and policies that never seem sincerely dedicated to any fundamental improvement of opportunity for what they call, not wrongly, “the 99 percent.”

The problem for Occupy Wall Street is that their founding-period political ancestors, who were indeed good at “occupying,” almost always accompanied their efforts with, for one thing, published resolutions registering specific demands and objections (not “this situation sucks” — which of course it does —  but “replace a regressive tax with a progressive one,” “give us access to the franchise,”  ”issue paper money,” “take away Robert Morris’s bank charter,” etc.). On Twitter I’ve tried to collect some specific goals from Occupy people. Generally those who respond seem interested not in anarchist dismantling of government or sweeping stuff like ending capitalism but, say, real regulation. Which is cool if only because my early American democratic-finance activists called themselves “regulators”!

But a lot of efforts to state a goal for the protest itself devolve in sloganeering about the economic situation and self-admiring paeans to the virtues of protesting. Wouldn’t galvanizing this stuff require… leadership? Our founding democratic-finance activists weren’t such communitarians that they refused to have leaders and set achievable goals. They were used to being rank-and-file — even though as miltiamen, they elected their leaders.

And they knew where they’d succeeded and failed. This thing in Zuccotti Park is open-ended. It has no declared closing date. How can it ever declare victory, get the hell out, build its organization, and come back to fight another day?