Do Republicans appreciate how bleak their options will be if Chris Christie decides not to run? 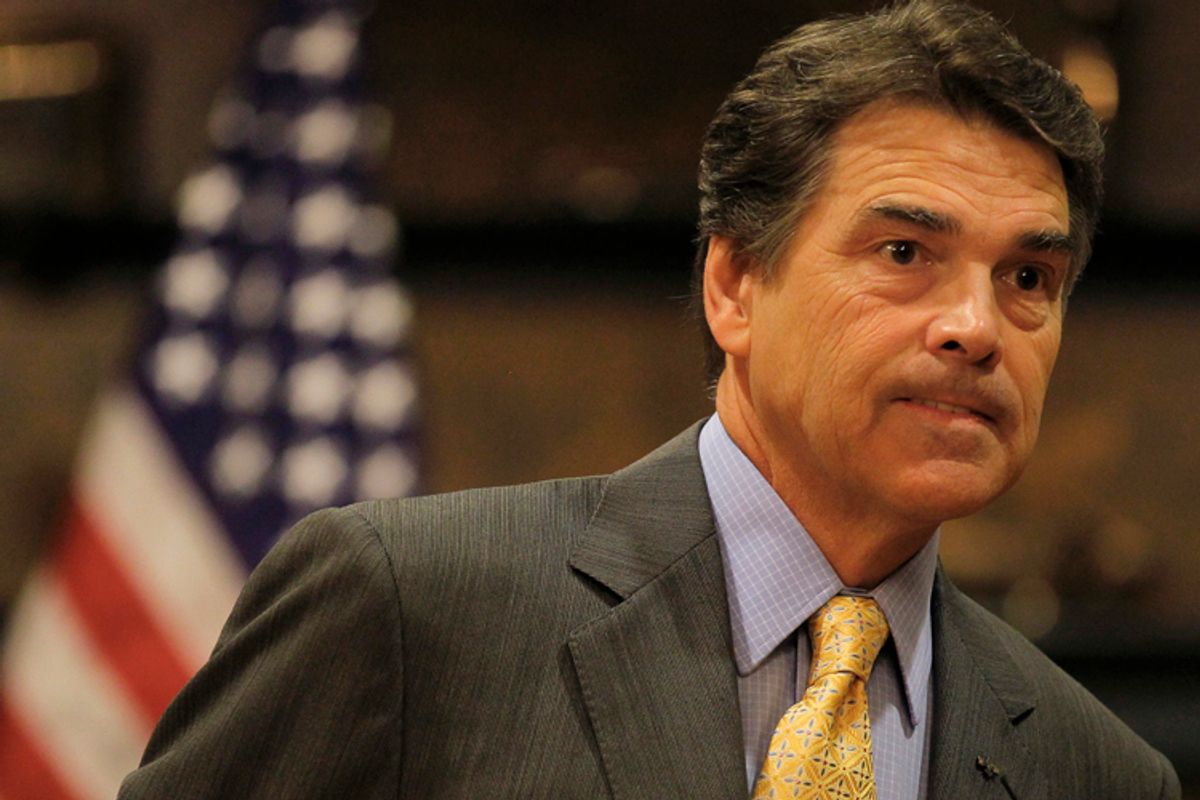 What you may have missed while the political world has been preoccupied with Chris Christie's last-minute reconsideration: The Good Ship Perry is still taking on water.

The latest news is that the Texas governor spent tens of millions of dollars in public funds to lure subprime lenders to his state, brushing off concerns about a potentially dangerous housing bubble in 2007 as "slightly alarmist." This comes a day after the Washington Post reported that the name of a hunting camp that Perry and his father leased for years (and where Perry routinely played host to supporters and fellow politicians) was rooted in a racial epithet.

Individually, these stories don't have to be devastating. Perry is hardly the only major politician with housing bubble baggage, and while the hunting lodge name does conjure unfortunate (and unhelpful) Old South associations, Perry has condemned it and claimed the rock on which the name was displayed was painted over years ago. Even some of his critics are now speaking out to say that they don't consider Perry a racist.

If his campaign were otherwise rolling along smoothly, these would probably amount to bumps in the road, at least in terms of the GOP nomination. But that's just the point: Things aren't going well at all for Perry -- and these stories will only feed the growing perception that he's just not cut out for the national stage.

Don't forget that it was Perry's initial failure to live up to his billing as the GOP's great unifier that prompted this latest round of Christie chatter. Perry began his campaign in mid-August and immediately surged to the head of the GOP pack, only to arouse concerns with some overheated campaign trail antics. He then turned in three increasingly shaky debate showings, culminating in an epically bad performance two Thursdays ago in Orlando, Fla. -- one that exposed him to ridicule from conservative opinion leaders that would have been unthinkable just a few weeks earlier.

In the wake of that train wreck, Perry suffered a lopsided and humiliating defeat (to Herman Cain!) at a Florida straw poll that his campaign had targeted aggressively. Then a national poll showed him losing a third of his support in the last month and falling behind Romney for the first time (while barely holding off Cain!). It was at that point, early last week, that Christie delivered his long-scheduled speech at the Reagan Library in California. The reviews from Republicans were positive, not so much for the speech but for the question-and-answer session that followed, prompting Christie to send signals for the first time that he actually might run.

But now, after a weekend of relative seclusion, signs are emerging from Christie's camp that he's unlikely to take the bait, apparently for fear of all of the risks that would attend a late-starting campaign. Which would leave Republicans in a very strange positions. Let's review:

For starters, with about three months until the Iowa caucuses, he’s going on a book tour for much of October. Second, he's not scheduled to be back in Iowa until mid-November. And third, his communications director just left his campaign -- to work for the reelection of Louisiana’s lieutenant governor (!!!).

Explain to me again why it's such a crazy idea for Christie to get in this race?