Behind the original kids' comic strip 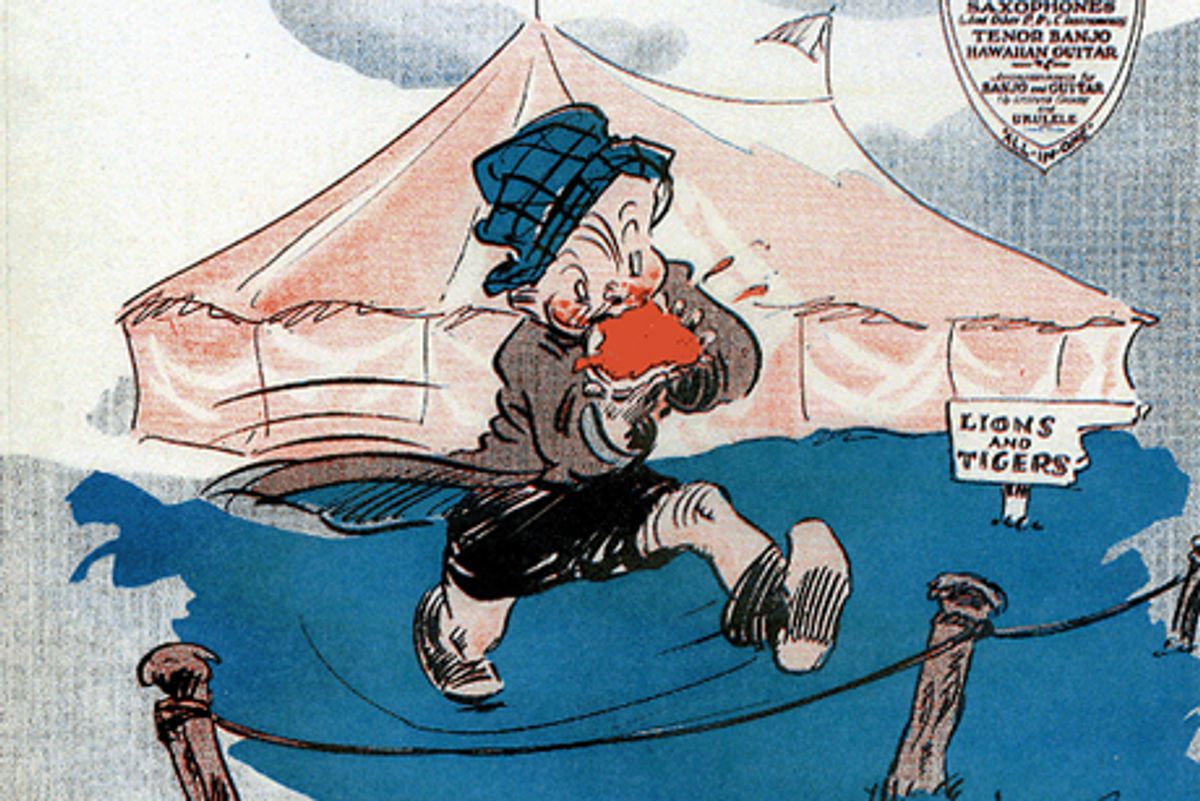 Before "Peanuts" there was "Skippy." And "Always Belittlin'." And "The Clancy Kids." And a wealth of other illustrations by Percy Crosby, one of America's most talented comic strip artists. Born in Brooklyn, N.Y., in 1891, Crosby's illustrious career began when he was in his teens, at a Socialist newspaper where fellow workers called him "Comrade Crosby." It ended in 1964 when he died, isolated and destitute, in an insane asylum. He had been committed 16 years earlier when he was diagnosed, possibly wrongly, as paranoid schizophrenic and delusional.

Back in May, I was taken aback to see an Imprint header that read "Skippy is Dead, R.I.P." It turned out to be Steve Heller's obit for the Oscar-nominated actor Jackie Cooper. But for me, "Skippy" will always signify the comic strip. With renderings as lively and exuberant as its colorful yet believable cast of characters, it's a classic of its kind. And because of that, Skippy will never die.

The headline also jolted Crosby's daughter, Joan Crosby Tibbetts, and she posted a comment on the piece's potentially confusing title. Subsequently, Joan and I struck up a conversation, which led to the following conversation.

As  you might guess by the title, "Skippy vs. the Mob" is a new book that reprints three months of continuity about a Mafia-style gangster. It also includes reproductions of Crosby's original art boards, along with a variety of other strips and illustrations. The book is subtitled "the Fight for Vesey Street ... and the American Soul." Joan's introductory essay, "Skippy: Reclaiming a Stolen Legacy," deals not only with the unscrupulousness of Al Capone, but also with the actions of a certain peanut butter company. So naturally, we talked about that as well.

What comic strips has your father's work inspired?

Of all the kid strips, "Skippy" profoundly influenced "Peanuts," as it's often been noted. Even Snoopy, Charles Schulz's rendition of Skippy's dog. Themes used were baseball, especially, and football, ice hockey and ice skating. Philosophical discussions about God and life. The lemonade stand. The fence and wall backgrounds seen in early "Peanuts" strips.

With "Dennis the Menace," it was the mischief element, and the repartee between kids and adults. Also, Hank Ketcham's ink swirl on Dennis' face has been noted by many to be like Skippy's.

It's obvious that Bud Blake studied Skippy closely for "Tiger." Punkinhead, Tiger's kid brother, wore an elongated necktie like Mortimer, a "Skippy" character. And the strip had similar themes, especially the kids' carts plummeting down steep hills as they spoke.

The cart was one of my father's most frequent devices. It launched a license for Skippy wagons and so forth. And Skippy pedal cars became the idea that launched the popular soap box derbies. Bill Watterson was asked in an interview if "Skippy" influenced "Calvin and Hobbes," but he said no. This is very surprising, as many see the connection.

What was the genesis of the Skippy vs. the mob story line?

During the Great Depression my father became alarmed about the effects of Prohibition that spawned a crime wave. Citizens and small businesses were terrorized while police and politicians took little action. Many were under mobster Al Capone's control. In 1930, my father did a "Skippy" daily strip satire of Capone, exposing the underworld's Wall Street ties and election rigging.

Skippy wanted his friends to help save their hometown values from Capone, whom he called "Spumone," buying elections with free booze, bribes and voter intimidation. The satire shows Skippy enlisting his friends' help as the "Revolkalutionists" in fighting the "Jacketeers." This continuity strip ended after Election Day, and preceded the trial and imprisonment of Capone for tax evasion.

Do you see similarities between those times and today?

I see many similarities to what's been happening today, with the entrenched corruption on Wall Street, its casino culture and bankster schemes that my father warned about. Then, it was racketeers with their protection schemes.

That was also when the U.S. was the world's largest creditor nation, yet awash in illegal liquor. Today, it's much worse, as we are a large debtor nation, beholden to China and other countries. The rackets are controlled by billionaire hedge fund operators and mortgage scams that have crippled the economy at taxpayer expense. And all the while Congress plays lapdog to its rich donors and turns a blind eye to social justice and laws designed to give a safety net to the little guys on the street.

What were your father's political beliefs when he was young?

Like Mark Twain and other literary colleagues, his political views were that of a progressive. His great concern was distrust of the growing power of large corporations in partnership with government and their Wall Street allies that were engaged in what we now call the "Walmart-ization" of small town America. His beliefs were often reflected in the "Skippy" strip.

And how did his early experiences affect his worldview?

It appears from his writings and memoirs of childhood that he was greatly influenced by his father and grandparents. They immigrated to America during the Irish potato famine, speaking only Gaelic. But they recalled their distrust of the British monarchy and its trappings. With that, and with the hostility to the Irish that he witnessed during the early 20th century, he became an observer.

As a courtroom artist during the Tammany era, my father saw rank corruption and deplored its effect. He feared the wide influence of organized criminal power in law and politics was destroying American values and community spirit.

When he became famous, he was invited to parties as a celebrity among the "bluebloods" of Oyster Bay at their mansions. But he never fit in with the establishment elites. He was viewed somewhat as a Bohemian artist, whose political cartoons stepped on powerful toes.

He also became an ardent anti-communist during the 1930s, with the growing unrest in Europe and Hitler's rise to power.

My father's early experiences at the New York Call, a Socialist newspaper, left an impression on his later political views. He was fired without pay when he was poor, while having seen the publisher feasting on a steak dinner.

He voted Democrat and supported Roosevelt in 1932. His anti-communist rants began when he believed that Communists had infiltrated government, and that FDR had close ties to Stalin, with the threat of war brewing. He also believed it was FDR who initiated an IRS tax complaint against him and Skippy, Inc. Being viewed as a "tax dodger" and an "economic royalist" added to his anger.

Could you summarize your father's dispute with Skippy peanut butter over the trademark and the label's copyright infringement?

My father and his character licensing corporation, Skippy Inc., owned many federal Skippy trademarks for ice cream, candy, bread, toys, dolls, books, film rights and so on. But in 1933, the Rosefield Packing Co., then bankrupt, attempted to register Skippy peanut butter in U.S. Patent Office as its federal trademark. Skippy Inc. sued and won, but Rosefield continued to expand its business, over my father's protests.

He was suing Rosefield again in 1948 when he was committed to a mental hospital, without due process, following a suicide attempt. He died there, impoverished, 16 years later, while Rosefield became rich.

I was appointed by the court to settle the estate, unaware that Rosefield had sold the stolen name to Best Foods in 1955, now Unilever. Years of litigation ensued, and the David vs. Goliath battle for redress continues to this day.

In 1966 Best Foods gave testimony to the FDA that "Skippy was originally named after the cartoon character who was painting a fence." Also, at a trial in 1980 Charles Schulz testified that he was always confused by the peanut butter label, and assumed that my father had given permission.

I've posted details and documents on Skippy.com. I also cover the events in my essay for the "Skippy vs. the Mob" book.

In that essay, you mention that your father continued to draw even after he'd been institutionalized.

It was heartbreaking to see the cheap paper and art supplies he was reduced to using, with hospital adhesive tape to edit or alter his writings and art.

If you're ever in D.C., request permission to see his fragile artwork that I donated to Smithsonian Archive of American Art. His watercolor and ink portrayals of mental patients are incredible. Reminiscent of Daumier.

Is the book currently available?

It sold out, but I'm negotiating with another publisher right now.

Here's an Imprint feature of related interest, which includes a photo of Percy Crosby.