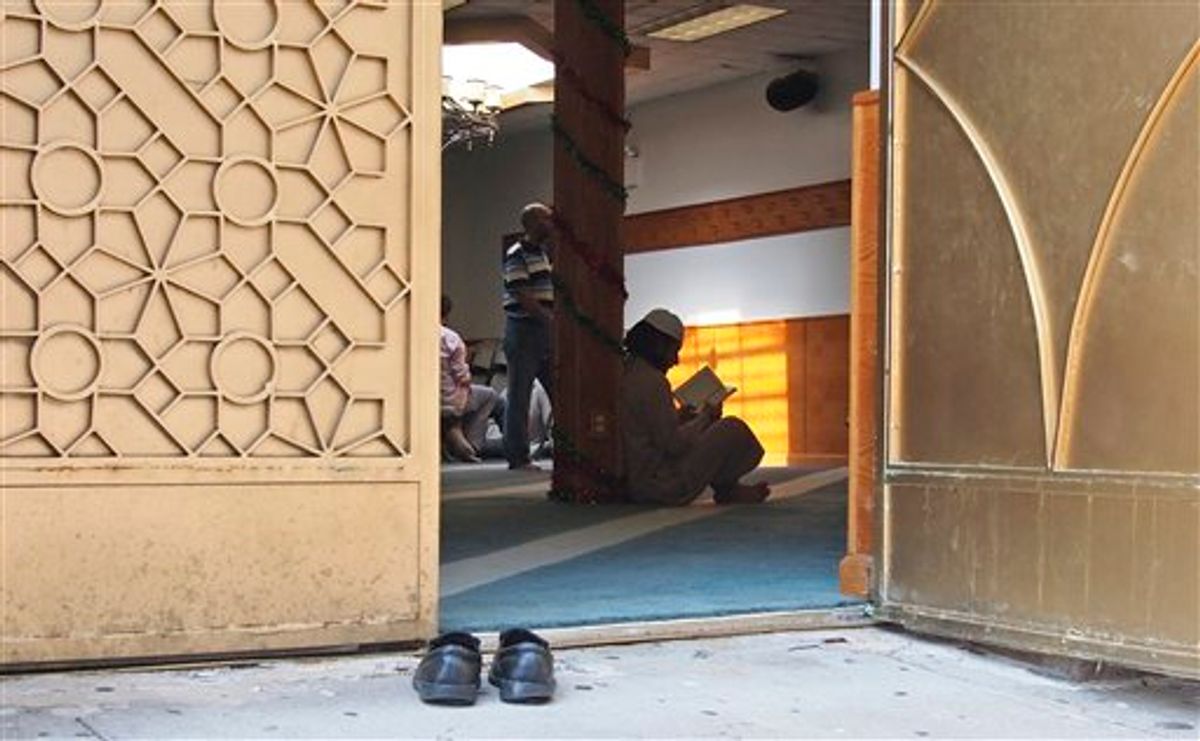 In this photo taken Sept. 2, 2011, worshippers are pictured inside the Al-Iman Mosque after midday prayers in the Astoria neighborhood of the Queens borough of New York. (AP Photo/Charles Dharapak)
--

Civil rights lawyers asked a federal judge Monday to force the New York Police Department to turn over documents about its secret efforts to spy on and infiltrate the Muslim community.

The request, filed in federal court in Manhattan, is based on reporting by The Associated Press, which revealed a clandestine police unit that monitored all aspects of daily life in Muslim neighborhoods. Documents showed that plainclothes officers were being dispatched to eavesdrop inside businesses. Restaurants that serve Muslims were identified and photographed. Hundreds of mosques were investigated. Dozens were infiltrated.

Police also maintained a list of 28 countries that, along with "American Black Muslim," were labeled "ancestries of interest."

"Based on this evidence, there is reason to believe that the NYPD retains records of surveillance of public places that are not limited to information pertaining to 'potential unlawful activity or terrorism,'" lawyers told U.S. District Judge Charles Haight.

A spokesman for the New York Police Department didn't immediately respond to a message seeking comment.

The documents were filed as part of a decades-old, class-action lawsuit against the NYPD for spying on war protesters and activists. Since 1985, a court order has limited how the department can monitor activities protected by the First Amendment. Police are not allowed to collect and store information about innocent people that is not related to criminal or terrorist activity.

"The (AP) articles, as well as NYPD documents that have been published in conjunction with them, strongly suggest that the NYPD retains such records as a matter of policy," wrote lawyer Jethro M. Einstein, the lead lawyer in the case.

NYPD spokesman Paul Browne has said police only follow leads and do not trawl neighborhoods. Documents obtained by the AP, however, show a secret team known as the Demographics Unit was instructed to canvass neighborhoods looking for businesses catering to one ethnic group, Moroccans. The documents indicated plans to build databases for other ethnic groups showing where they eat, work, pray and shop.

Current and former officials said those databases made some working in the police department uncomfortable, including in-house lawyer Stuart Parker. Because of those concerns, they said, the Demographics Unit stored its information on a special computer not connected to the department's normal intelligence database. Lawyers asked Haight to order police not to delete any of those materials.

Haight did not immediately rule on the request.