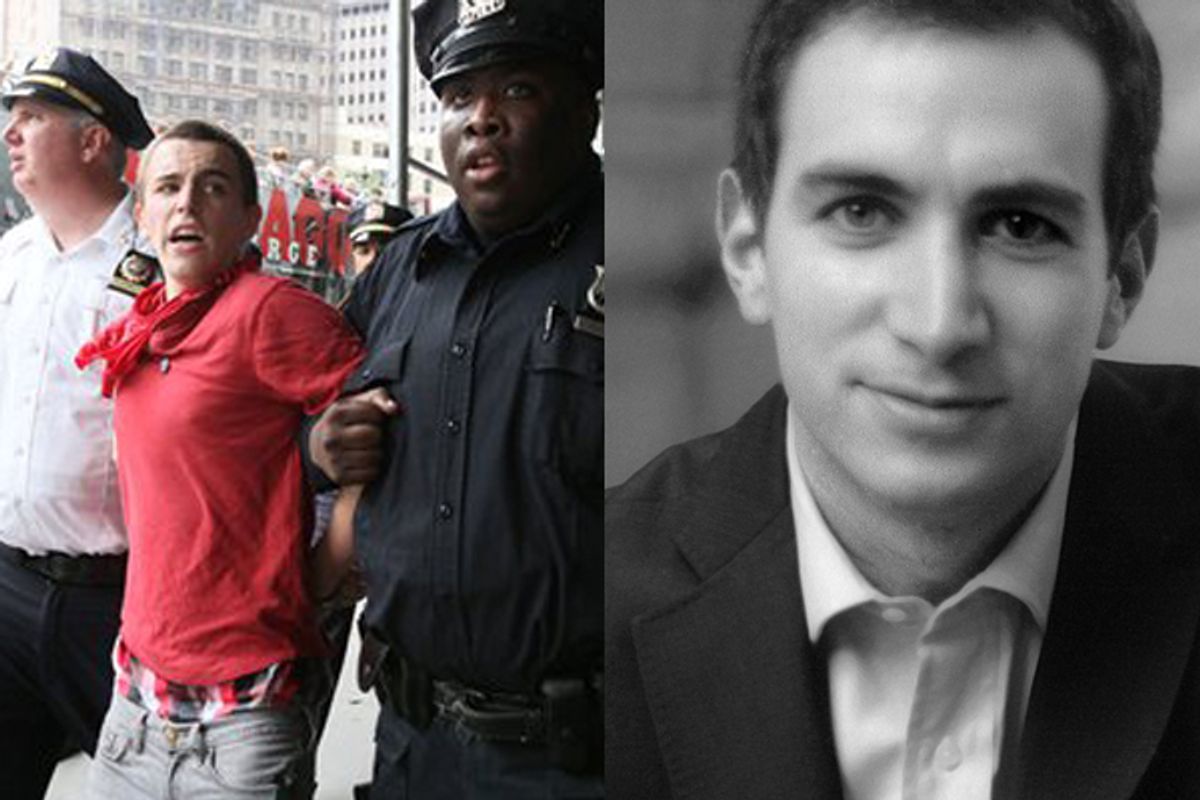 The Occupy Wall Street protest has been growing in numbers, respectability, and media attention for several weeks now.  Despite that, The New York Times' financial columnist who specializes in Wall Street coverage, Andrew Ross Sorkin, has neither visited the protests nor written about them -- until today.  In a column invoking the now-familiar journalistic tone of a zoologist examining a bizarre new species of animal discovered in the wild, Sorkin explains what prompted him to finally pay attention (via Michael Whitney):

I had gone down to Zuccotti Park to see the activist movement firsthand after getting a call from the chief executive of a major bank last week, before nearly 700 people were arrested over the weekend during a demonstration on the Brooklyn Bridge.

“Is this Occupy Wall Street thing a big deal?” the C.E.O. asked me. I didn’t have an answer. “We’re trying to figure out how much we should be worried about all of this,” he continued, clearly concerned. “Is this going to turn into a personal safety problem?”

How interesting that when a CEO "of a major bank" wants to know how threatening these protests are, he doesn't seek out corporate advisers or dispatch the bank's investigators, but instead gets the NYT's notoriously banker-friendly Wall Street reporter on the phone and assigns him to report back.  How equally interesting that if this NYT financial columnist can't address the concerns and questions of a CEO "of a major bank," he hops to it to find out what was demanded of him.  Sorkin did what he was told, cautiously concluding:

As I wandered around the park, it was clear to me that most bankers probably don’t have to worry about being in imminent personal danger. This didn’t seem like a brutal group — at least not yet.

As I noted last week when critiquing the patronizing, dismissive and scornful attacks on these protests from establishment circles, the "message" is clear and obvious enough, and Sorkin had no trouble discerning a significant part of it: "the demonstrators are seeking accountability for Wall Street and corporate America for the financial crisis and the growing economic inequality gap."  He added: "that message is a warning shot about the kind of civil unrest that may emerge — as we’ve seen in some European countries — if our economy continues to struggle."  His CEO banking friend is right to be concerned: if not about this protest in particular then about the likelihood of social unrest generally, emerging as a result of their plundering and pilfering.  That healthy fear on the part of the oligarchs has been all too absent.

Though it's not evident in Sorkin's column (nor in this characteristically snotty, petty, pseudo-intellectual condescension of yesterday from The New Republic), the prevailing media (and progressive) narrative about the protests has rapidly shifted from these-are-childish-vapid-losers to there-is-something-significant-happening-here.  In part that's because the protests have endured and grown; in part it's because the participants are far less homogeneous and suscepitble to caricature than originally assumed; in part it's because they are motivated by genuine and widespread financial suffering that huge numbers of Americans know intimately even though it receives so little attention from insulated media stars; in part it's because NYPD abuse became its own galvanizing force and served to highlight the validity of the grievances; and in part because their refusal to adhere to the demands from the political and media class for Power Point professionalization and organizational hierarchies has enabled the protests to remain real, organic, independent, and passionate.

What will determine how long-lasting and significant is the impact of these protests is whether they allow themselves to be exploited into nothing more than vote-producing organs of the Democratic Party -- the way the GOP so successfully converted the Tea Party into nothing more than a Party re-branding project.  There is no question that such efforts are underway, as organizations that serve as Party loyalists try to glom onto the protests and distort them into partisan tools.

I have a hard time seeing that working.  After all, the reason this is a street protest movement (rather than, say, a voter-registration crusade or an OFA project) is precisely because the protesters concluded that dedicating themselves to the President's re-election and/or the Democratic Party is hardly a means for combating Wall Street's influence, rising wealth inequality or corporatist control of the political process.  Still, it's hard to avoid the suspicion that the reason these protests are now receiving more respect in establishment venues is because those venues now see some potential use to be made of them.  Those dedicated to the original purpose and message of the protest - and Matt Stoller defined that as well as anyone here -- will need to make resisting those efforts a top priority if they want to succeed.

Though the Tea Party was effectively annexed into the GOP, it did succeed in creating itself as a force within the Party which must be heeded and which cannot be entirely controlled by party leaders.  Aaron Bady suggested today that perhaps that's the best-case scenario to be realistically hoped for here: that these protests metastasize into a genuine protest movement that at least forces the Democratic Party to take heed, pay attention, and periodically make substantial concessions.  That's a reasonable view, but the unique value and promise of these protests is that they are independent of prevailing political institutions, and it's difficult to see how these protests can simultaneously be fully integrated into those institutions while preserving that value.

The dynamics they are contesting are overwhelmingly systemic, not partisan.  The call between Sorkin and his banking-CEO-friend that caused the NYT columnist to make his anthropological foray into the street jungle to report back on the discontented animals is a perfect symbol of the institutional forces that are the target of this unrest.  Dedicating oneself principally to the Democratic Party's electoral prospects or Barack Obama's re-election campaign would seem a glaring non sequitur to those concerns.

UPDATE: Last week's NYT article scoffing at the protesters (that one by Ginia Bellafante) ended by noting what NYT editors apparently thought was the towering irony that some of the protesters use Apple computers; Sorkin here invokes the same trite mockery, ending his column with the piercing observation that he saw "two of them walking over to the A.T.M. at Bank of America." Apparently, you're not allowed to protest rampant criminality on Wall Street and the corruption of corporatist control of the political process unless you keep your money under your mattress and communicate by carrier pigeon -- at least not without incurring the derision of those wicked satirists at the NYT.

As usual, note that these brave, intrepid, watchdog journalists heap huge amounts of scorn on the most marginalized and powerless segments of the society, yet would never dare direct even a fraction of that mockery to those who wield power, such as Sorkin's "CEO of a major bank" friend.  Modern establishment journalists have taken what should be the credo and mission of actual journalism -- afflict the powerful and comfort the powerless -- and completely reversed it (along those lines, note that Sorkin -- for no journalistic reason whatsoever and in violation of the NYT's own rules -- shields the identity of his CEO-of-a-major-bank friend with anonymity; is it not newsworthy that the CEO of a "major bank" fears the Wall Street protests?).

The Nation's Jeremy Scahill, usually a harsh critic of establishment journalists, today decided to generously come to Sorkin's aid with this tweet:

I genuinely wonder whether Sorkin, before descending into the protesting hordes, donned one of those masks popularized in Asia at the height of the SARS epidemic.  When visiting strange and exotic cultures, one can never be too careful.  Is it any wonder that the severe economic suffering and anxiety pervading American society receives so little attention and concern from establishment media outlets and their stars?