The carnage Chris Christie leaves behind 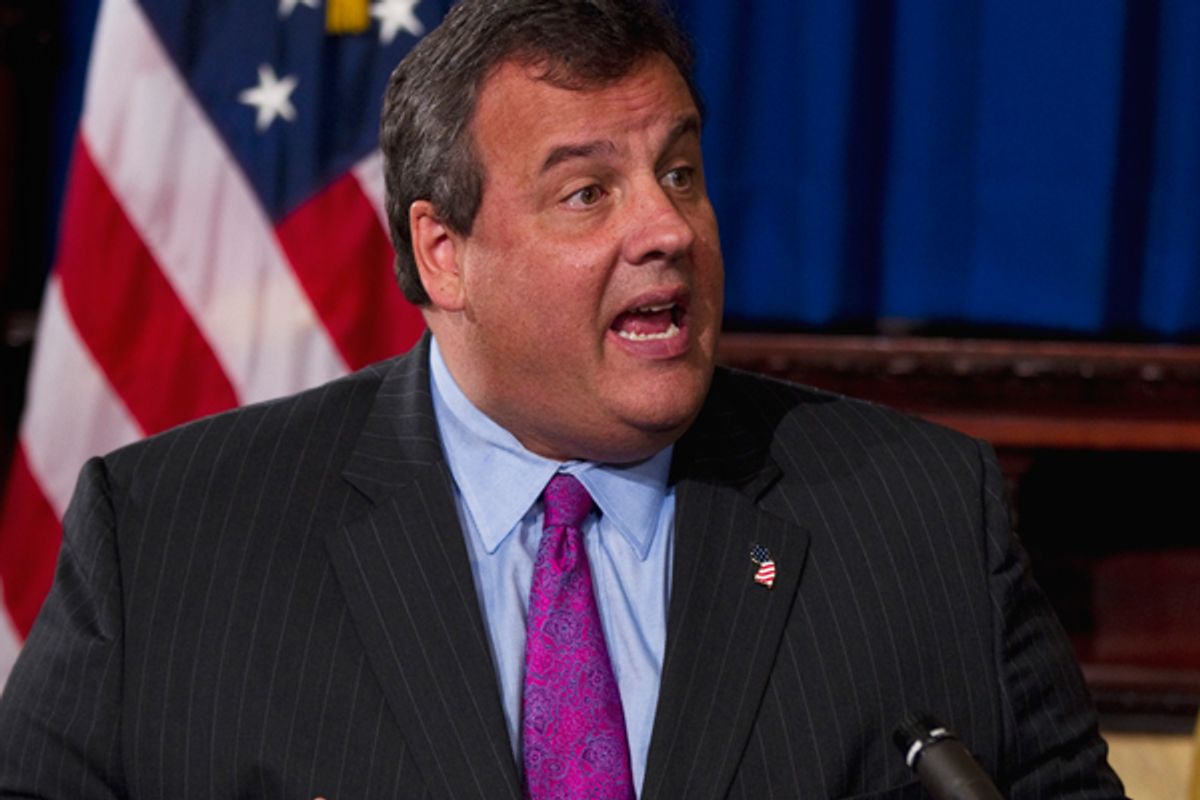 There were plenty of obvious, logical reasons for Chris Christie to announce this afternoon -- hardly for the first time, but probably for the last time -- that he won't run for president in 2012.

Filing deadlines for key early primaries are a few weeks away and the first contests are just a couple months away, meaning that Christie would have had almost no time to build a national fundraising network and a state-by-state campaign infrastructure from scratch. And there would have been all of that uncomfortable scrutiny from conservative opinion leaders -- not to mention his opponents -- over his secret liberal past, particularly on immigration. Plus, he would have been risking everything he has in New Jersey, with a losing national campaign (one that he would have embarked on after a year's worth of adamant, over-the-top denials) making his path to reelection as governor in 2013 even more iffy than it already is.

So he made the safe call, using a press conference in Trenton to say that he'd felt obligated to consider pleas from Republicans to enter the race but that "the deciding factor was that it did not feel right to me, in my gut, to leave now when the job here is not finished." But when you look at what, exactly, he's saying no to, it raises the question of whether Christie made a smart call. Just consider what the Republican presidential race now looks like.

There's Mitt Romney, who's the nominal front-runner and the safest-seeming general election option for the GOP. But Romney has been running for president with all his might for six years now, and he can't seem to break 25 percent in national polls. Romney's profound vulnerability was confirmed when Rick Perry entered the race in mid-August and immediately overtook Romney, building a comfortable double-digit lead. It's only because Perry has performed so poorly as a candidate that Romney has managed to retake the lead, but even that comes with an asterisk: Almost all of the support that Perry has lost in the last few weeks has gone to second-tier fringe candidates (Herman Cain and Newt Gingrich, mainly) instead of Romney. The newest poll, from ABC News and the Washington Post, has Romney at 25 percent, followed by Cain and Perry at 17. This is a sad commentary on Romney's standing within his own party.

And let's look closer at Perry, because his freefall may be even worse than that poll suggests. There's also a new survey in Florida, released yesterday afternoon, that has him plummeting to fourth place -- with just nine percent, behind even Gingrich. The promise of Perry's campaign was that he'd instantly and permanently unify conservatives, who had been desperately seeking a credible alternative to Romney. Instead, he's unnerved them with overheated campaign trail antics and a series of mediocre to brutally bad debate performances. And he's failed so far to provide them with a satisfactory cover story for his own ideological baggage, which has actually allowed Romney -- yes, Romney -- to tout himself as the candidate of consistency.

Nor is there any reason to regard Cain as a threat to win the nomination, despite his recent return to prominence. He has no discernible strategy (and doesn't even plan on being in Iowa for more than a month!) and just lost his press secretary ... to a campaign for lieutenant governor. And when the spotlight was on him earlier this year, he demonstrated an alarming lack of basic foreign policy knowledge. The more attention Cain gets now, the more likely he is to wilt -- again. The same is doubly true for Gingrich, who is essentially waging a one-man campaign with no money or organization. His recent polling success is the product of a few strong-seeming debate performances, but if you think he's on the verge of becoming a contender, just remember: He's unusually prone to self-destruction.

This is the field that Christie would have been running against. Already, without even lifting a finger, he was running at 17 percent nationally, according to a just-completed Quinnipiac poll, tied with Romney for first and ahead of Cain (12 percent) and Perry (10). And while it wasn't quite as rosy for Christie, the ABC/Washington Post survey has had him at 10 percent.

Some believe it would have been all downhill from there, and maybe they're right. But think back to that question-and-answer session Christie did at the Reagan Library last week, the one that ended with the woman begging him to run, and the crowd responding with a standing ovation. The performance was vintage Christie. In off-the-cuff-settings -- town halls, debates, interviews -- he is one of the strongest, most compelling communicators in American politics today. Like him or not, he's a lot more than the caricature of rage that many mistakenly assume he is. He generates positive personal feelings from audiences, particularly Republican audiences; they like him and they want to be with him -- and if that means rationalizing away a less-than-conservative past position or two, they'll do it. Romney and Perry and most other politicians on the national stage today just don't have the same effect on people.

What's most amazing is that the value of the Republican nomination is only increasing, even as the party's nominating process looks more and more like a farce. Given the state of the economy, just about any candidate the GOP nominates will have a real chance of defeating Barack Obama and becoming president. And yet the party is stuck choosing between Romney and Perry. Oh, and maybe a pizza guy, too.