Underdogs should stick together

President Obama said he's the 2012 underdog, and I hope that means he'll band together and fight the overdogs 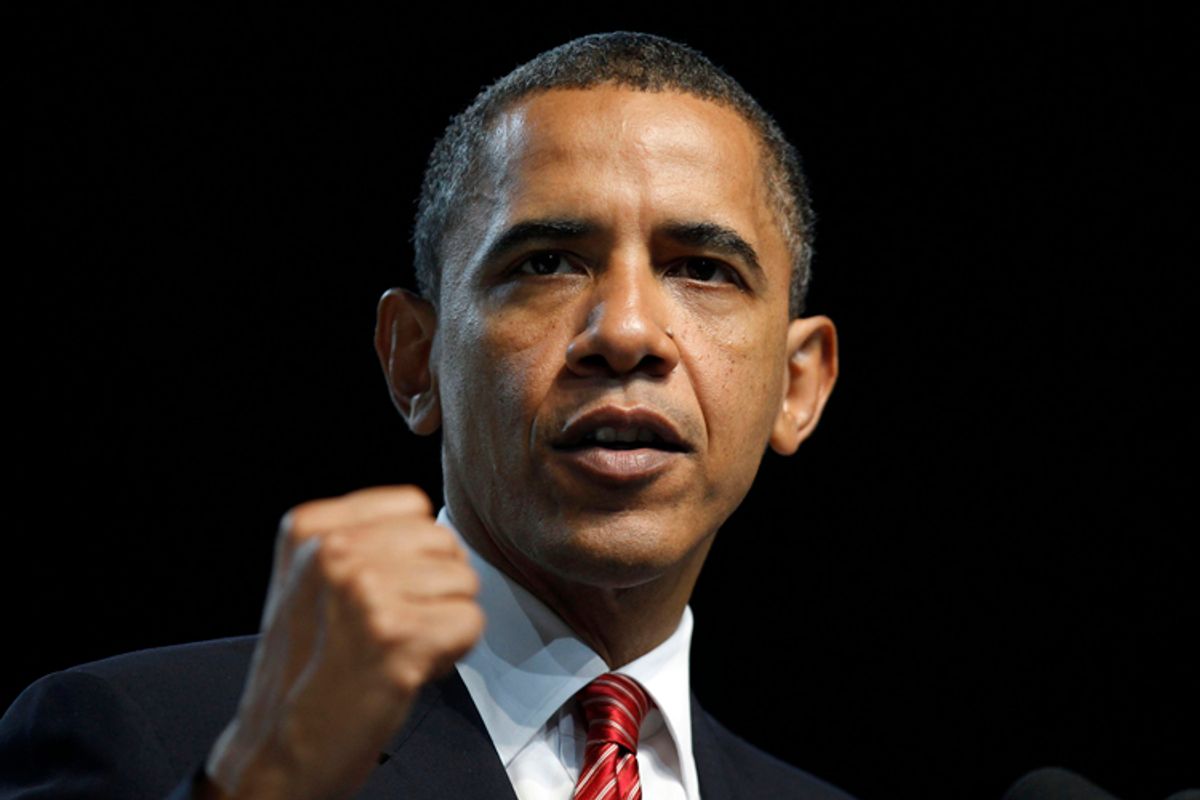 I like that President Obama called himself an underdog Monday in an interview with ABC's George Stephanopoulos. If the GOP gets its act together in 2012 and doesn't nominate a crazy Tea Party person, he could be in trouble. But they probably won't. Maybe the president is realizing that the overdogs are determined to bring him down, so he better cast his lot with the majority of Americans, who are underdogs. If he fights for them, they'll fight for him.

The very same day, House Majority Whip Eric Cantor gave the president a huge gift, arrogantly insisting the House GOP won't even have a vote on Obama's jobs bill; they plan to carve it up and serve it to the Tea Party, which will reject pretty much all of it. The full bill itself, Cantor told reporters, is dead.  One asked: "The $447 billion jobs package as a package: dead?" the reporter asked. "Yes," Cantor replied. Let's hope Obama keeps pushing for a vote on the entire $447 billion jobs package.

On MSNBC's "Hardball" Monday, Chris Matthews staged what he called "The Great Democratic Debate," between Democratic centrists and progressives, about which way Obama should go in 2012. Progressives clearly had the upper hand. Michael Moore trounced Mark Penn, with Penn suggesting that Obama lay off his "class warfare" -- defined as pushing tax hikes for the uber-rich -- because wealthy people are more likely to vote.

If ever I've seen a better illustration of how Democrats lost their moorings in the last few decades, it was Penn's argument. First of all, a lot of poor and working-class voters dropped out of the system because neither party represented their interest. Penn's strategy actually dovetails with what's devastated the Democratic Party in my lifetime: running away from their proud legacy of putting government on the side of most Americans, and therefore losing the allegiance of many struggling voters who used to be Democrats.

What's even sillier is that Penn was a top advisor to Sen. Hillary Clinton, and he pushed that sort of campaign on her in 2008. She lost badly to the young senator from Illinois, who was about bringing more people into the process. And we're asking Mark Penn to give Obama advice because?  In the next segment, Sen. Bernie Sanders squared off against former Pennsylvania Gov. Ed Rendell. They didn't disagree on very much, practically -- Rendell's basically an economic populist, and he and Sanders agreed that Obama needed to focus on jobs and the economy. But Rendell said one thing I disagree with strongly: That the president should pursue independents because he doesn't need to worry about his base; the base will be with him, whatever he does. Some parts of his base will, and some parts won't. The president would be wrong to take any segment of his 2008 base for granted, from African-Americans to union members to young people.

I happen to think it's a phony dichotomy, asking whether the president should move to the center or the left, because it lets the GOP define the center. A majority of Americans, including moderates and independents, support raising taxes on the rich. In fact, according to "the Survey of Affluence and Wealth in America" conducted by the Hamilton group and sponsored by American Express, released Tuesday morning, three-quarters of wealthy Americans support increasing taxes on Americans making more than $1 million a year, and half support hiking them on those making $500,000.

A solid majority of Americans think Obama should have stuck with jobs and not pivoted to deficits last year. A larger majority opposes any effort, by either party, to trim Social Security or Medicare. A decisive majority thought he should have pushed back harder on the GOP during the debt-ceiling debacle – including a majority of the independents who Rendell and Penn think will be crucial in 2012. Even a majority of Republican-leaning independents wanted the president to fight harder. A fighting populist strategy is good policy, and good politics.

The "Hardball" debate was also framed by my least favorite political comparison right now -- between Bill Clinton and Barack Obama. Matthews, Penn and Rendell portrayed Clinton's win as a triumph of a centrist strategy. But the main reason Clinton won was the booming economy. We have no idea what role his centrism played. It's as much a political dead end as claims that Clinton was enthusiastically reelected, with liberal support, because he's white. I've made clear how I feel about that -- and my feelings have only gotten stronger.

My particular "Hardball" segment wasn't the best, because the Chicago Tribune's Clarence Page and I were set up to disagree -- and we didn't disagree at all. I'm not sure how we got put on the same side, but it caught Matthews off-guard and made for an odd exchange. But I made some of the points I tried to. Here it is.