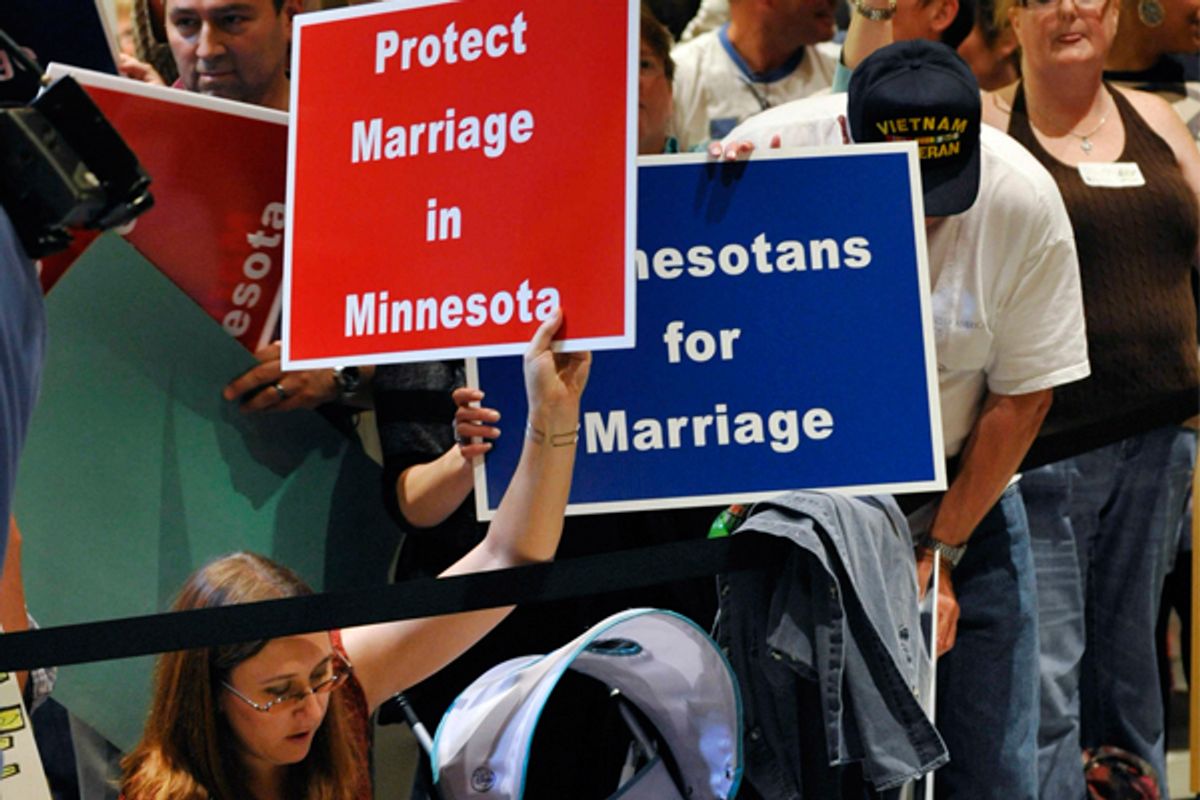 Minnesota may end up being the first state to actually defeat a gay marriage ban by popular vote. It's far from a sure thing, with polls showing a split electorate, but a plurality of voters opposes enshrining a marriage ban in the state constitution. Anti-equality groups -- the ones who got the legislature to put the state constitutional amendment on the 2012 ballot in the first place -- are going to spend a fortune fighting to convince the on-the-fence voters that allowing same-sex couples to get hitched will somehow destroy the very fabric of society. They'll have to fight Minnesota campaign finance law to do so.

The Minnesota Independent reports that the anti-gay marriage coalition will challenge the Minnesota Campaign Finance and Public Disclosure Board's attempt to close donation disclosure loopholes. The National Organization for Marriage, the prominent national anti-equality group that has fought against disclosing donors in every campaign it's been involved in, claims they're the victims of "deliberate targeting by the government." (NOM generally claims to be a victim, all of the time, of everyone.)

Here's the AP on the new reporting guidelines:

The state's Campaign Finance and Public Disclosure Board approved a new "statement of guidance" on political spending for ballot measures that identifies some instances in which private donations to national groups trying to influence Minnesota ballot measures must be reported by the recipients of the donations.

Totally unfair! Boo! We should never, ever, ever know who is spending millions to secretly advance political agendas in our home states, ever!

Minnesota for Marriage considers the guidelines "illegal," and so it will continue following the old disclosure requirements, which seems more "illegal" to me, in that it is ignoring the campaign finance board's rules. (It seems more illegal both to me and to the pro-campaign finance reform group Common Cause Minnesota.)

Of course, campaign finance disclosure laws are laws of men, not of God. God hates transparency almost as much as he hates granting hospital visitation rights to same-sex couples.