U.C. Berkeley’s response to a student satire on affirmative action shows the campus isn’t ready to talk about race 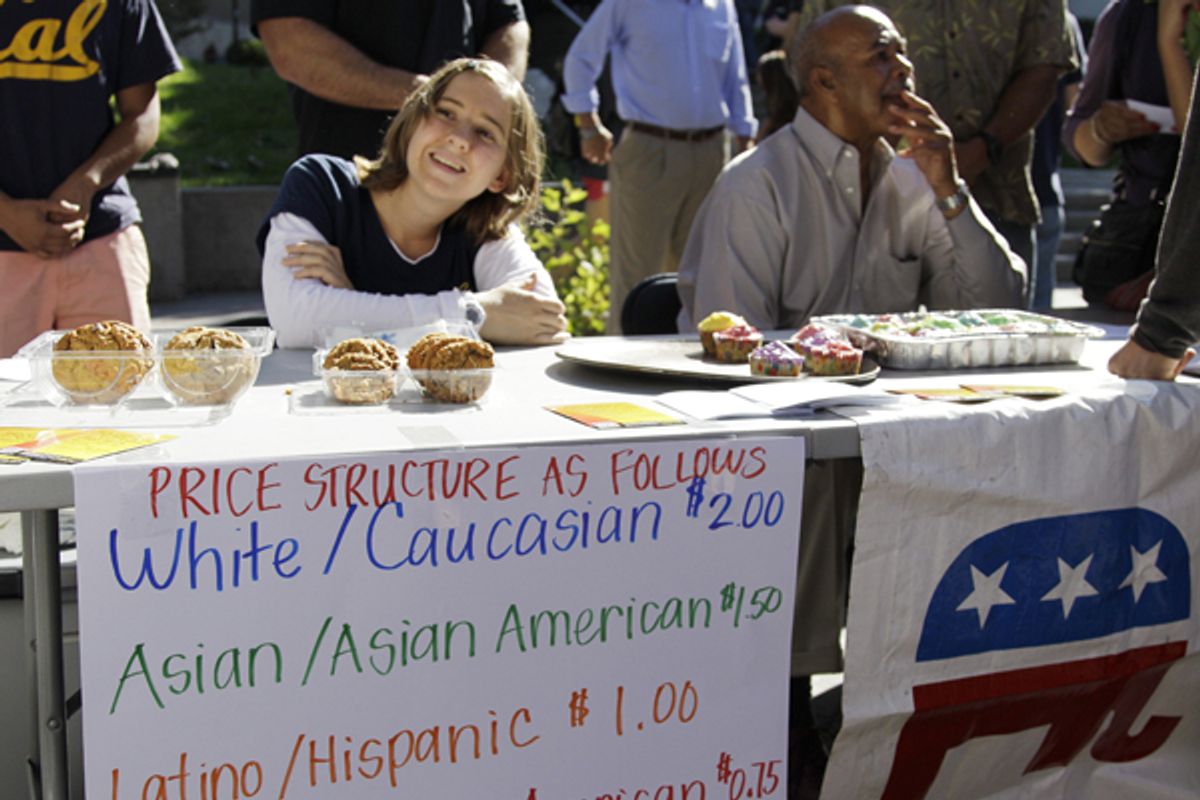 A student sells baked goods during a bake sale led by the Berkeley College Republicans on Sept. 27. (AP/Ben Margot)
--

In 2008, in response to the furor over his association with the outspoken minister Rev. Jeremiah Wright, then-Sen. Barack Obama delivered a famous speech calling for a national conversation about race. In that speech, he argued a long-standing “racial stalemate” had prevented both blacks and whites from discussing their concerns about race “in polite company.” For many blacks, he said, the bitter legacy of discrimination meant that “questions of race, and racism, continue to define their worldview in fundamental ways.” As for whites, “[m]ost middle-class white Americans don’t feel that they have been particularly privileged by their race ... So when they hear that an African-American is getting an advantage in getting a good job or a spot in a good college because of an injustice that they themselves never committed ... resentment builds over time.”

Obama’s crucial point was that the anger and fear of both blacks and whites was legitimate. On the one hand, whites needed to recognize that racial discrimination, past and present, did “not just exist in the minds of black people,” but was a real issue that had to be addressed. But blacks, too, needed to break out of their programmed responses to white grievances. “[T]o wish away the resentments of white Americans, to dismiss them as misguided or even racist, without recognizing that they are grounded in legitimate concerns – this too widens the racial divide, and blocks the path to understanding.”

Obama’s message has apparently not gotten through to the University of California at Berkeley. As the hysterical reaction to a recent “Diversity Bake Sale” shows, the place that gave birth to the Free Speech Movement (and my alma mater) is not capable of talking freely about race.

Last week, the U.C. Berkeley College Republicans – not a group I ever thought I would find myself defending -- staged what they called an “Increase Diversity Bake Sale,” to protest a bill, S.B. 185, that would allow public California universities to consider race, ethnicity and gender in admissions. The bill, which Gov. Jerry Brown has indicated he may sign, is an attempt to get around Proposition 209, which California voters passed in 1996 and which prohibited preferential treatment of minorities by the state.

In the bake sale, cupcakes were offered at different prices to different racial and ethnic groups. For whites, the price was $2; for Asians, $1.50; for Latinos, $1; for Native Americans, 75 cents. Women got an additional 25 cents off.

The cupcake sale was an obvious, and dead-on, political satire. The purpose of S.B. 185 is to give “underrepresented minorities” – blacks and Latinos – preference in admissions. To comply with U.S. Supreme Court rulings outlawing racial preferences in college admissions, the bill disingenuously asserts that it will not give such preferences, but that is an obvious ruse: Its author, state Sen. Ed Hernandez, has stated that its purpose is to increase black and Latino enrollment at California public universities. If it did not give those groups an advantage in admissions, it would be pointless. The Academic Senate of the University of California recognized this in a letter to the U.C. administration recommending that the university remain neutral on the bill. The bill’s intention is to give blacks and Latinos a discounted admission to California colleges. The bake sale, which offered discounted cupcakes to blacks and Latinos, is an exact equivalent. If the bake sale is offensive, then racial preferences themselves are offensive.

Regardless of your position on affirmative action, the bake sale was completely within the bounds of acceptable satire. It was not like one of those fraternity pranks where a bunch of yahoo rich white kids dress up in blackface and pretend to be ghetto gangbangers. Yet many U.C. students, the U.C. student government and the U.C. administration reacted to the bake sale as if the Ku Klux Klan had erected a gigantic burning cross in Sproul Plaza.

Enraged counter-protesters decried the bake sale as “racist.” The student organizers of the parody were threatened, and there was talk of defunding their organization. The student senate voted 19-0 to condemn the bake sale.

Most egregiously, U.C. Berkeley chancellor Robert Birgeneau and two top administrators felt impelled to send out an open letter to the campus community, condemning the bake sale as “contrary to the Principles of Community we espouse as a campus.”

The terrible offense the creators of the bake sale were guilty of? Hurting people’s feelings. “This event has moved the campus community into dialogue, because it was hurtful or offensive to many of its members,” the letter – also signed by Gibor Basri, vice-chancellor for diversity and inclusion, and Harry LeGrand, vice-chancellor for student affairs – piously intoned. Remarkably, this letter did not even attempt to argue that there was anything objectively offensive about the bake sale. The mere fact that it offended some students was considered sufficient grounds to condemn it; whether it was actually offensive, or racist, or beyond the pale in any way, was deemed irrelevant by U.C. Berkeley’s top brass. “The issue is not whether one thinks an action is satirical or inoffensive; the issue is whether community members will be intentionally -- or unintentionally – hurt or demeaned by that action.”

If he actually followed this absurd position to its logical conclusion, Chancellor Birgeneau would have to spend all his time firing off open letters. He would have to rebuke pro-Israeli groups for hurting Palestinians’ feelings, and vice-versa. He would have to criticize opponents and supporters of abortion rights for making their adversaries feel bad. In fact, if he really wanted to defend the feelings of the campus community, he should send an open letter to California voters, telling them that by passing Proposition 209 they did something very hurtful.

But of course Birgeneau will not send any of those letters. Because his hypocritical letter is really only concerned with protecting the feelings of one group: underrepresented minority students. Its implicit message: It is not permissible to talk about race except in approved ways. Any deviation from the script will be censured.

Is this any way to run a university? And is it any way to advance racial dialogue?

As then-Sen. Obama pointed out, affirmative action remains one of the most divisive issues in American society. White anger over it has been one of the key factors behind the rise of the American right. Even many of its most articulate defenders, like Orlando Patterson and Glenn Loury, acknowledge how flawed, problematic and morally troubling it is. It needs to be talked about. By trying to make it off-limits to free discussion, U.C. Berkeley has abdicated its proud heritage as a bastion of free speech and succumbed to a stifling racial politeness that does no one any good – least of all the minority students whose allegedly delicate feelings it is at such pains to protect. College is supposed to be a preparation for life, and life is full of arguments and confrontations, some of which can hurt one's feelings. Condescension and paternalism are not solid foundations for racial progress.

The sanctimonious approach to race in the chancellor’s open letter reflects the anodyne, Mom-and-apple-pie celebration of “diversity” that has become a quasi-official American orthodoxy. There is nothing necessarily wrong with the fact that American institutions, from the government to big corporations, now actively promote racial inclusion, harmony and understanding. But when racial “diversity” becomes a sacred cow, one that trumps everything else, true diversity – diversity of opinion – is threatened. Colleges and universities are one of American society’s last lines of defense of that vital diversity, which also goes by the name of freedom. They must hold the line.