When I botched the eulogy

At my grandfather\'s funeral, I gave a speech full of pretentious cliches. Here\'s what I wish I\'d said 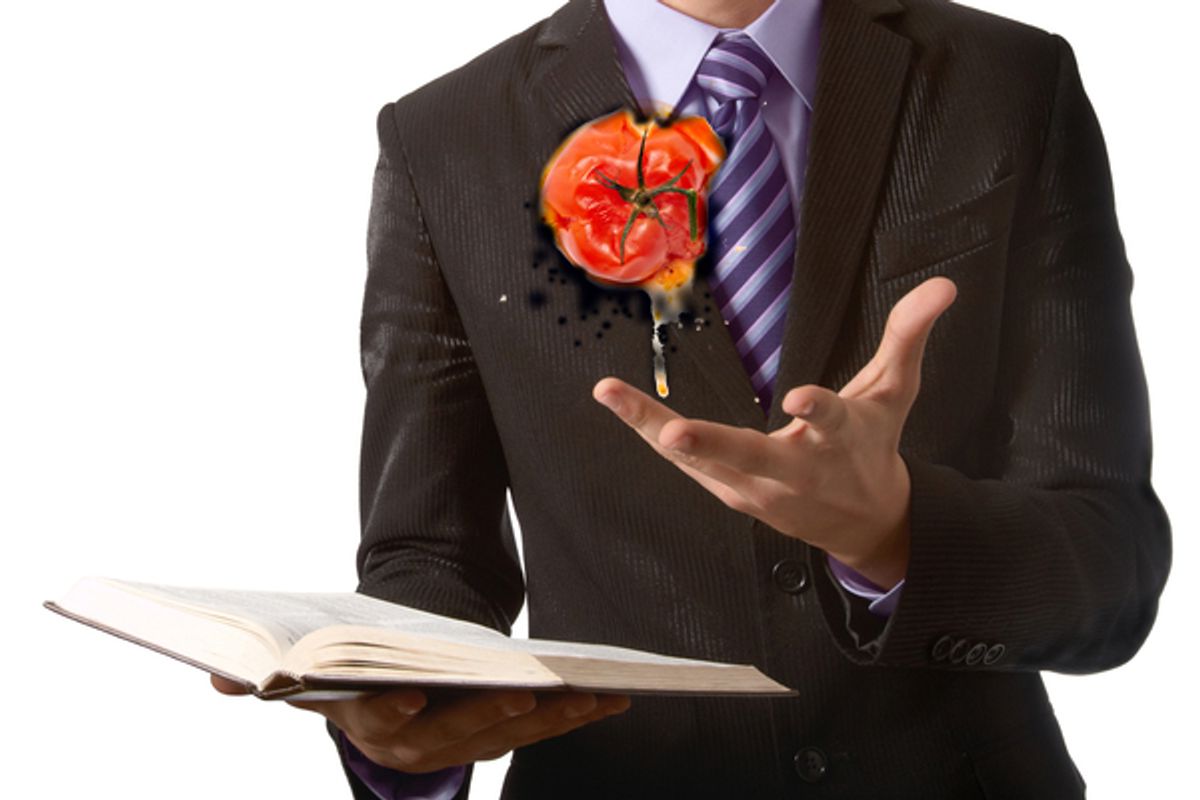 (George Muresan and Picsfive via Shutterstock)
--

When my grandfather died, it was my job to eulogize him. It was a task I was up for, as I was an English major, and what are English majors good for if not the occasional eulogy? ("Certainly not making any money," my father liked to remind me at the time.) I wrote it in a single night, in longhand, and made several highfalutin literary allusions, which I've now forgotten, or blocked from my mind out of sheer embarrassment. For there is nothing worse than a pretentious, haughty eulogy, except for, maybe, a pretentious, haughty English major delivering a pretentious, haughty eulogy. Though perhaps there were some in the audience who were authentic romantics, in which case they, in real time, were treated to a glimpse of the great love affair between a budding intellectual and the sound of his own voice. Which is to say, I gave a terrible eulogy.

For a while now, this failure has bothered me. I was unable to evoke my grandfather on the day we buried him, and along with highfalutin literary references, I stumbled into Bruce Springsteen territory, and spoke about what it means to be a man. Only I didn't sound like Bruce Springsteen -- I sounded like a pretentious, haughty English major trying to sound like Bruce Springsteen delivering a eulogy. And I was wearing a banker's suit; I looked vaguely Republican and therefore suspect. I was preposterously un-Boss-like. Springsteen would never have had a career if he'd worn that suit. He would have been laughed off the stage, called a liar.

And lying, I've come to realize, is a fundamental part of eulogizing the ones you love. You try to make an immortal, fictional character of the dead, you simplify and reduce him to a few qualities -- great sense of humor, loved his beagles unconditionally -- perhaps in order to impart a manageable image to the mourners, but more likely because there's always the issue of not really knowing the person you're burying. The latter was my problem. I was uncomfortable with the facts and so left them, and subsequently my grandfather, out of the eulogy entirely.

After all, what was I to say?

His name was James Diem, not, as he liked to point out both in conversation and on his answering machine, James Dean, the actor. Had he had an ironic bone in his body, this would have been the greatest of jokes, since James Dean was the rebel without a cause, Mr. Live-hard-and-die-young, while James Diem spent the last 30 years of his life hunched over his kitchen table, reading Prevention magazine with a magnifying glass. He was a great self-diagnostician, so good that at least five doctors concluded that their services were unnecessary, and suggested he seek treatment elsewhere. I can't blame them. How do you reason with a man from South Orange, N.J., who's certain he's coming down with a disease native to Guam?

We told him he was a hyphochondriac, which he was, through and through. But that word meant nothing to him, and on family occasions, as we all greeted one another in the foyer of some house or other, exchanging trivial pleasantries -- "Hello. How are you? Good to see you" -- Grandpa Jim, never inclined to be dishonest, would inevitably tell you, matter-of-factly, about his leaky valve. "It's not good," he would say. "The thing is leaking like crazy. It's like a burst pipe. It's spraying everywhere. I'm in bad shape." None of us knew what he was talking about, including my grandmother.

She don't know. That construction tortured my father's ears, and, he often points out, for the three decades he served as James Diem's son-in-law he never once heard him properly diagram a sentence, or even remotely adhere to basic rules of grammar. It was almost as if Jim was doing it on purpose, trying to get a rise out of my father, because in his world there was no negative that could not be doubled, no modifier that could not be misplaced, no verb that could not be made to disagree with its subject. My father often wondered aloud what language Jim was speaking, and, red in the face, would correct him over and over, pleading with him not to speak that way in front of my brother and me, who, he deeply feared, would mimic grandpa's version of English in public, thereby making him, my father, appear a grossly neglectful parent, the kind that abandoned his children to troglodytes, if the troglodytes were sedentary and drank Zinfadel and had a fondness for bonds and Yiddish and scorched salmon. (Regarding the last item: He'd order it charred and then, after taking a bite, complain it was too dry.)

Grandpa's vocabulary was similarly strange, but somehow seemed to match his outfits, which were a mishmash of clashing colors and dated styles. But only a man wearing white loafers with pink plaid golf pants (note: he was not a golfer or, for that matter, a pimp) could ever utter sentences on the order of, "Clean off the macadam and I'll give ya a c-note. Don't get yourself meshugenah. Take your time. I'll be inside masticating my food." As a child, I thought he was cruel, trying to test my resolve with respect to what I was learning in school. Could I differentiate between real and fake words? It seemed a sensible test, just as his conviction, until the day he died, that George Washington was not the first president seemed like a sensible test. I thought, perhaps, he was dedicated to keeping people on their toes, which also explained why my grandmother was always saying "for Christ's sake," and why he tipped waiters and waitresses not according to the bill, but according to whim. Once, after my family had run up quite a tab, a server followed us to the car, cursing and whipping the check around as if it were a little flag. For all of his troubles, grandpa demonstrated his gratuity by giving the man a single solid U.S. dollar.

But my father's biggest gripe with Jim was his unwillingness to sign a living will. Given what I've already told you, this should come as no surprise. Grandpa had absolute faith in machines and tubes, regardless of the circumstances. His brain could have fallen out of his head and been run over by a Mack truck, and, were it possible, he would have preferred to spend the rest of his days sleeping with a beating heart than sleeping underground without one. "You're not gonna pull da plug on me," he'd scream. "You's don't know what's gonna happen." He wished to be cryogenically frozen. "There could be advancements," he'd say. "Breakthroughs." We didn't honor his wishes, but I like to think that, had we, and had it all worked out in his favor, he'd be sitting at his kitchen table, reading Prevention magazine.

About five years before Jim died, my father decided to have a "big talk" with him. The talk was to be dad's closing statement on the subject of the living will. As a lawyer, he firmly believed in the powers of persuasion, even when faced with the most formidable of adversaries. "Listen," he said to my grandfather. "I want to tell you a story."

Grandpa was sitting on the couch in our living room, crossing and uncrossing his legs. He rubbed his pale blue eyes, gathered the phlegm in his throat -- "hah-puh!" -- removed a tissue from his pocket, and, after bringing it to his mouth, spit. Then he rolled the tissue into a ball and returned it to his pocket. "Go on," he said.

My father grimaced, somewhat disgusted, but not disgusted enough that he was knocked off course. Grandpa had been spitting into tissues for years, most notably at the dinner table while everyone was eating. "Look," Dad said. "I get it. You're scared. You're afraid to die. We're all afraid to die. But if you wind up, God forbid, a vegetable, do you know what happens if you don't have a living will?" He let the question hang in the air a while. Grandpa raised his eyebrows as if intrigued. Then, when he was certain he had him in the right place, my father launched into an impassioned parable about a family member of his, a man who had, indeed, wound up a vegetable. He was on life support for years and drove his family into bankruptcy. The man's wife lost her mind, and his daughter, completely destitute, became an alcoholic at the age of 13. "Do you," my father asked, banging the table for emphasis, "want that for your family?"

Grandpa rubbed his chin and looked up at the ceiling. He appeared to be deep in thought. He took off his glasses, cleaned the lenses, and put them on again. There was overwhelming tension in the room. It was like the moment before a jury delivers its verdict. Grandpa coughed and licked his lips, preparing to speak. "But I don't understand," he said, sincere as a child on Christmas. "Where did she buy the liquor?"

I should mention, now, that grandpa was preoccupied with other things besides death. Mainly, these things consisted of sex and his penis. He often complained, at incredible decibels -- he was practically deaf -- that my grandmother was "hoarding her goods," and generally "holding out" on him. Apparently she'd been holding out on him for quite some time. "The old lady don't even remember what it looks like," he'd say, pointing to his crotch. This typically, and not surprisingly, mortified her, and caused my grandmother to belittle his libido. "Eh," he'd say, shrugging his shoulders. "She'll miss it when I'm gone. She'll keep a portrait of my penis by the bed. With the erection!" And apparently he intended to make good on this declaration, since, when he died, my mother found a drawer full of mail-order erectile supplements in his bathroom. I'm sure, had she looked harder, she would have found a camera not far away.

But photographs, like to-do lists, enable you to forget. A proper eulogy, then, should enable you to remember, should be forever open-ended like a short story, raising more questions than it answers. Grandpa Jim never signed a living will -- he wished to achieve immortality. That is all. The end.