Reuters describes the bureaucratic panel that, with no oversight or transparency, orders citizens killed by the CIA 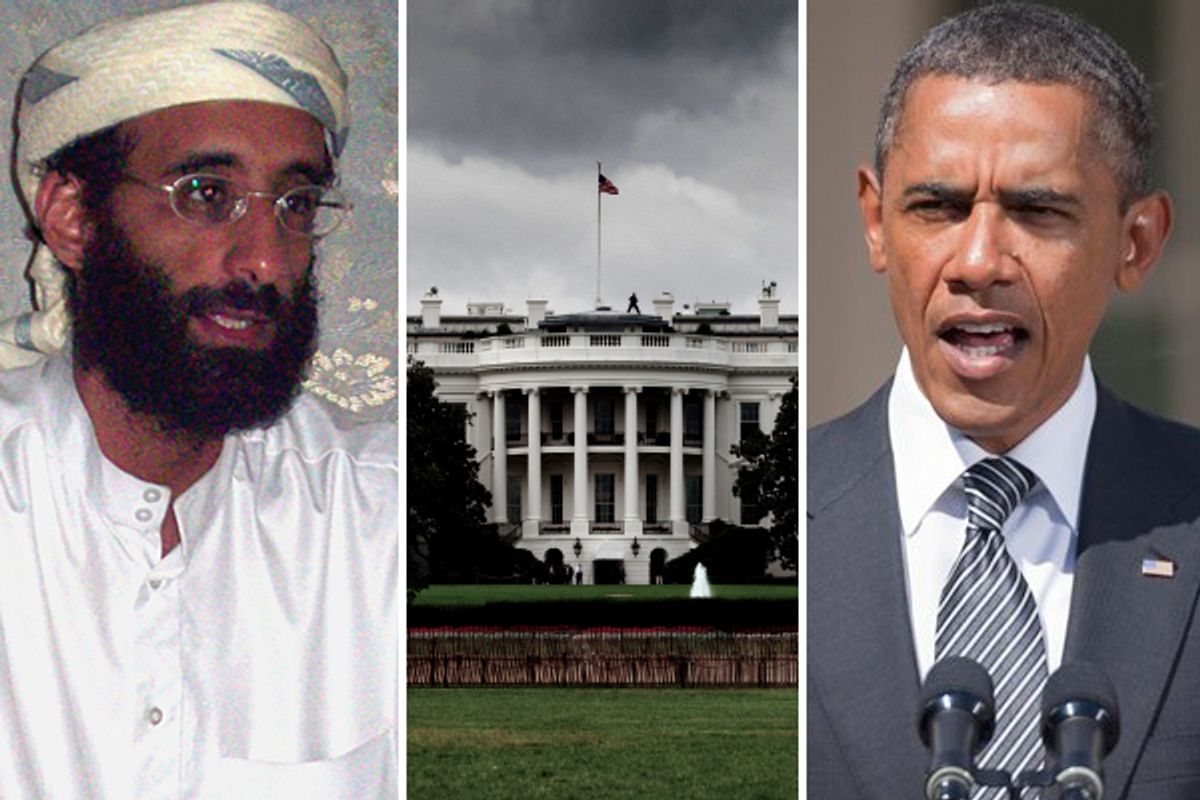 Here is what the Democratic President has created and implemented, and what many party loyalists explicitly endorse (when there's a Democrat in the White House) -- from Reuters:

American militants like Anwar al-Awlaki are placed on a kill or capture list by a secretive panel of senior government officials, which then informs the president of its decisions . . . . There is no public record of the operations or decisions of the panel, which is a subset of the White House's National Security Council . . . . Neither is there any law establishing its existence or setting out the rules by which it is supposed to operate. . . . The role of the president in ordering or ratifying a decision to target a citizen is fuzzy. White House spokesman Tommy Vietor declined to discuss anything about the process. . . .

Representative Dutch Ruppersberger, was asked by reporters about the killing.  The process involves "going through the National Security Council, then it eventually goes to the president" . . . .Other officials said the role of the president in the process was murkier than what Ruppersberger described. They said targeting recommendations are drawn up by a committee of mid-level National Security Council and agency officials. Their recommendations are then sent to the panel of NSC "principals," meaning Cabinet secretaries and intelligence unit chiefs, for approval . . .  But one official said Obama would be notified of the principals' decision. If he objected, the decision would be nullified, the official said.

So a panel operating out of the White House -- that meets in total secrecy, with no known law or rules governing what it can do or how it operates -- is empowered to place American citizens on a list to be killed by the CIA, which (by some process nobody knows) eventually makes its way to the President, who is the final Decider.  It is difficult to describe the level of warped authoritarianism necessary to cause someone to lend their support to a twisted Star Chamber like that; I genuinely wonder whether the Good Democrats doing so actually first convince themselves that if this were the Bush White House's hit list, or if it becomes Rick Perry's, they would be supportive just the same.  Seriously: if you're willing to endorse having White House functionaries meet in secret -- with no known guidelines, no oversight, no transparency -- and compile lists of American citizens to be killed by the CIA without due process, what aren't you willing to support?

Of all the things I've seen over the past several years, easily one of the most repellent has been the number of people -- especially journalists -- who are running around definitively asserting that Awlaki had an "operational role" in Terrorist plots and had "taken up arms" against the U.S. even though they have no idea whether that's actually true (Politico's Roger Simon: "U.S. citizen living overseas and plotting the death of American citizens from, let’s say, Yemen, you can say hello to our little friends, the 100-lb. Hellfires"; Josh Marshall: Awlaki was "a key leader of an international terrorist group, organizing and inspiring terrorist attacks within the US" ).  Just consider how even the anonymous government officials who spoke to Reuters in order to defend the Awlaki killing characterize the "evidence" they have to support that claim:

The Obama administration has not made public an accounting of the classified evidence that Awlaki was operationally involved in planning terrorist attacks.

But officials acknowledged that some of the intelligence purporting to show Awlaki's hands-on role in plotting attacks was patchy.

For instance, one plot in which authorities have said Awlaki was involved Nigerian-born Umar Farouk Abdulmutallab, accused of trying to blow up a Detroit-bound U.S. airliner on Christmas Day 2009 with a bomb hidden in his underpants.

There is no doubt Abdulmutallab was an admirer or follower of Awlaki, since he admitted that to U.S. investigators. . . . But at the time the White House was considering putting Awlaki on the U.S. target list, intelligence connecting Awlaki specifically to Abdulmutallab and his alleged bomb plot was partial. Officials said at the time the United States had voice intercepts involving a phone known to have been used by Awlaki and someone who they believed, but were not positive, was Abdulmutallab.

Someone spoke to someone on "a phone known to have been used by Awlaki": maybe it was Abdulmutallab, maybe it wasn't.  Maybe it was Awlaki, maybe it wasn't.  Who knows?  Who cares?  Some officials "believed" it may have involved those two, so it's time to kill Awlaki.  Remember, Good Democrats hate the death penalty because they think it's so terribly barbaric to execute people whose guilt is in doubt (even if, unlike Awlaki, they've enjoyed an indictment and full jury trial, lawyers, the right to examine evidence and to confront witnesses, multiple appeals, and habeas petitions).  There's also this:

Awlaki was also implicated in a case in which a British Airways employee was imprisoned for plotting to blow up a U.S.-bound plane. E-mails retrieved by authorities from the employee's computer showed what an investigator described as " operational contact" between Britain and Yemen.

Authorities believe the contacts were mainly between the U.K.-based suspect and his brother. But there was a strong suspicion Awlaki was at the brother's side when the messages were dispatched.

There was a "strong suspicion" -- not that Awlaki participated in this email plotting, but that he was "at the side" of someone who did.  Who needs "beyond a reasonable doubt'?  That is so pre-9/11.  "A strong suspicion" that he may have been next to someone plotting an attack: that's the McCarthyite standard Democratic Party loyalists are holding up to justify the due-process-free execution of their fellow citizen by a secret, lawless White House "panel."

What's crucial to keep in mind is that nobody can see this "evidence" which these anonymous government officials are claiming exists.  It's in their exclusive possession.  As a result, they're able to characterize it however they want, to present it in the best possible light to support their pro-assassination position, and to prevent any detection of its flaws.  As any lawyer will tell you, anyone can make a case for anything when they're in exclusive possession of all the relevant evidence and are the only side from whom one is hearing; all evidence becomes less compelling when it's subjected to adversarial scrutiny.  Yet even given all those highly favorable pro-government conditions here, it's obvious -- even these officials admit -- that the evidence is "partial," "patchy," based on "suspicions" rather than knowledge.

But no matter.  Officials in the Obama White House and then the President decreed in secret that Awlaki should die.  So the U.S. Government killed him.  Republicans who always cheer acts of violence against Muslims are joined by Democrats who reflexively cheer what this Democratic President does, and now this death panel for U.S. citizens -- operating with no known rules, transparency, or oversight -- is entrenched as bipartisan consensus and a permanent fixture of American political life.  I'm sure this will never be abused: unrestrained power exercised in secret has a very noble history in the U.S. (Reuters says that the only American they could confirm on the hit list is Awlaki, though Dana Priest reported last year that either three or four Americans were on a  hit list).

Anyway, look over there: wasn't it outrageous how George Bush imprisoned people without any due process and tried to seize unrestrained power, and isn't it horrifying what a barbaric death cult Republicans are for favoring executions even when there's doubt about guilt?  Even for those deeply cynical about American political culture: wouldn't you have thought a few years ago that having the President create a White House panel to place Americans on a CIA hit list -- in secret, without a shred of due process -- would be a bridge too far?

UPDATE: I don't think it's dispositive of the question here -- because the U.S. Government isn't permitted to murder fugitives who aren't violently resisting apprehension and, in any event, Awlaki was never a fugitive since he was never indicted by the U.S. for anything -- but Robert Farley persuasively highlights the baselessness of the excuse that Awlaki could not have been apprehended (and he also documents how dubious, uncertain and filled with doubt is the case against Awlaki generally).