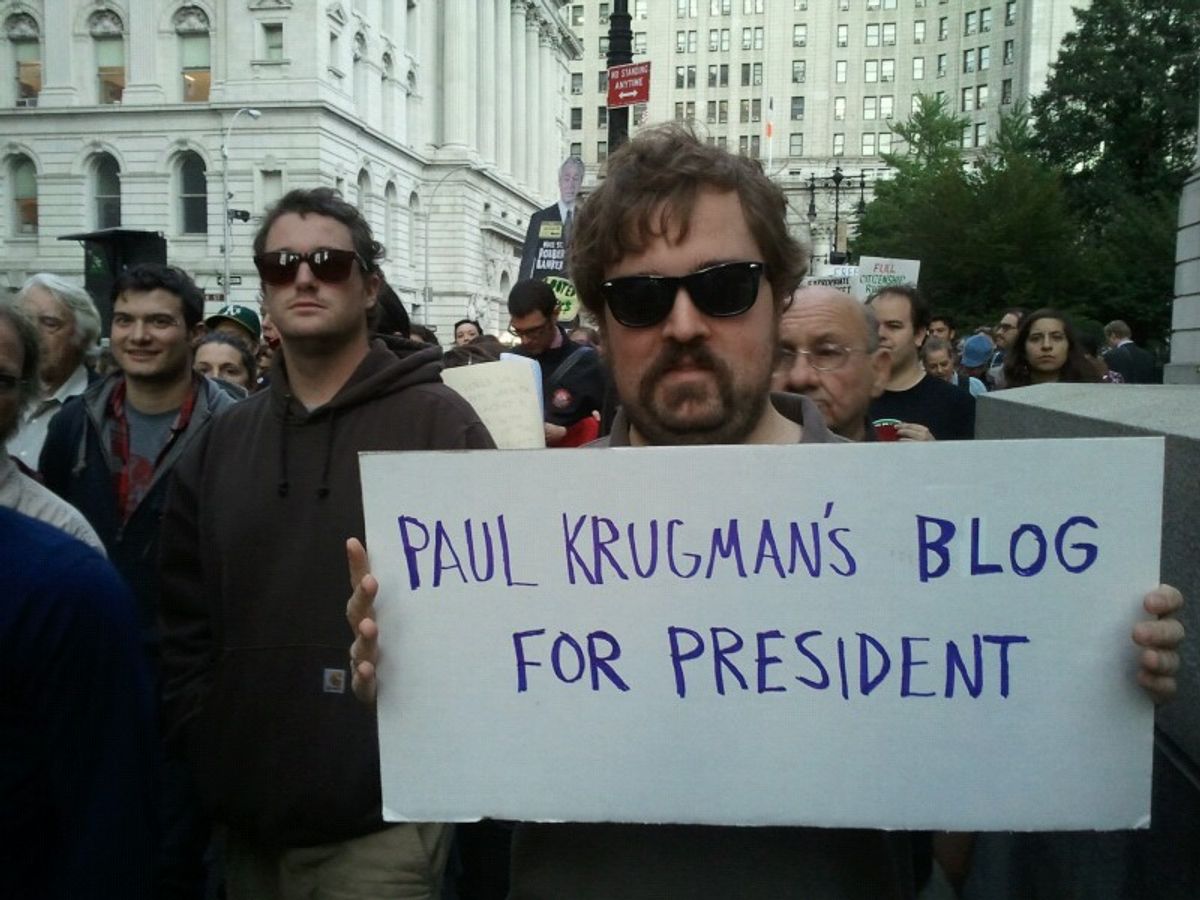 A scene from the Wall Street march. (Justin Elliott)
--

I spent Wednesday at Occupy Wall Street, where thousands of union members joined the core protesters for what was easily the biggest march yet of the burgeoning movement. A crowd of as many as 15,000 people marched from Foley Square just north of City Hall to Liberty Square, the capital of Occupy Wall Street. It was diverse in age, race and aesthetic sensibility -- hardly a pack of hippies.

The mood during the afternoon march was elation and a sense that something is happening. Nurses, teamsters, service workers, teachers and bus drivers were all well represented. It remains difficult to impose a simple narrative on Occupy Wall Street, so here are a few thoughts and observations, in no particular order:

The goals question: The union folks at the rally Wednesday were far more demand-oriented than the hardcore occupiers who have been sleeping in lower Manhattan since Sept. 17. The most common theme in the union signs and speechs at the rally outside City Hall was to simply tax the rich. One of the chants I heard was representative: "How do we cut the deficit? End the wars! Tax the rich!"

The speeches outside City Hall, by labor luminaries like United Federation of Teachers president Michael Mulgrew, were amplifed through a system of loudspeakers. Unlike the occupiers of Liberty Square, the unions had a permit for the rally, allowing for amplification and for the sort of speechifying that simply doesn't happen at Liberty Square.

It's unclear whether labor can join forces with -- or perhaps harness the power of -- Occupy Wall Street beyond one big march. I've heard fears from protesters that they will be co-opted by institutional forces. But even if they try, unions may not be able to co-opt Occupy Wall Street. Mother Jones reported, for example, that when officials from the Amalgamated Transit Union "recently paid a visit to the protesters in Zuccotti Park to ask how to help, their biggest struggle was finding someone to speak with." That's an example of the limitations of the radically decentralized structure of the protest movement.

The no-specific-goals strategy does have something to recommend it: results. Occupy Wall Street continues to grow at an impressive rate.

And the debate about defining goals continues, both in the left-leaning media and among the protesters. Nation editor Richard Kim tweeted, for example: "The power of #OWS is in alchemy of negativity (No! This is wrong!) and utopia (another world is possible!). Not in a list of demands."

Kristofer Petersen-Overton, a political science Ph.D. student at CUNY and a participant in the march Wednesday, wrote on his Facebook page:

"Just got back from the Occupy Wall St. rally tonight. What a great mix of people. But I think the movement needs to start with direct action or it will lose steam. Having police guide obedient demonstrators along designated paths is hardly civil disobedience. Still, its great to witness neoliberalism's discontents -- and in the United States of all places."

Others -- like the union leaders present Wednesday -- have a detailed social democratic agenda. (A couple of other takes on the debate are here and here.

Police presence swells: I counted three NYPD helicopters hovering in the sky above City Hall as the rally unfolded. A man next to me claimed there had been as many as five at one point. There were easily hundreds of officers, the rank-and-file in traditional blue uniforms, police brass in white shirts, and others wearing business suits. There is a special corps of officers wielding hand-held camcorders who are devoted to recording everything that happens. And there's this mobile panopticon tower that seems to be permanently stationed at the northwest corner of Liberty Square surveilling the scene.

There were reportedly a few dozen arrests Wednesday and at least one pepper-spraying. This unfolded when a small group of demonstrators tried to march on Wall Street proper -- a couple of blocks away from Liberty Square -- which has generally been kept off limits by police. By the time I got to the scene, the police were aggressively pushing people off Wall Street and back toward Liberty Square, and the crowd dispersed. One officer was videotaped predicting "my little nightstick is going to get a workout tonight." Here's video of an officer briefly using his nightstick against a crowd of protesters. And a journalist from the local Fox affiliate was apparently maced by an officer.

There were several tense verbal confrontations between protesters and police on Wednesday night, with the crowd I was in chanting at one point, "Fuck the police, from New York to Greece!"

What's Bloomberg's next move? The billionaire mayor has not exactly taken a friendly view of the protesters, telling them last week not to get too comfortable (and also citing some plainly inaccurate data about Wall Street salaries). On Wednesday I interviewed Councilman Peter Vallone, chairman of the Public Safety Committee, who had floated the idea to WNYC that the cost of the police presence downtown is straining the city budget. I asked him for specifics -- how much money has been spent -- and he said he doesn't have any hard numbers at this point. He also said he had not heard complaints from the NYPD about the situation.

"Right now we're facing an increased terror threat based on revenge after the recent drone strike [on Anwar al-Awlaki]. This is really putting a huge strain on our police department," Vallone said, adding: "The police department and the mayor are well aware of the money that it's costing taxpayers. They will have to decide at what point they can place reasonable limits on the size and location of the protest."

Bloomberg and the NYPD brass have probably realized at this point that any action to evict the protesters will only help the movement grow -- witness the media interest following the pepper-spraying incident two weeks ago, and the Brooklyn Bridge mass arrests on Saturday. So I'd bet they're hoping the thing will peter out.

Best signs: "Paul Krugman's blog for president," was one of the better signs I saw Wednesday. Others included a homeowner's outburst, "Citi stole with falsified documents," and a sports fan's lament:  "Even Kobe got outsourced."

And this accountant's  indictment of Goldman Sachs' tax evasion.

More media coverage: Longtime New York activist Bill Dobbs, one of the volunteer P.R. reps for the movement, told me Wednesday that media interest had spiked in the past couple days -- by American media but especially by international media. Camera crews were on hand from countries as far away as Poland, Turkey and Japan, he said.