The end of the dollar standard 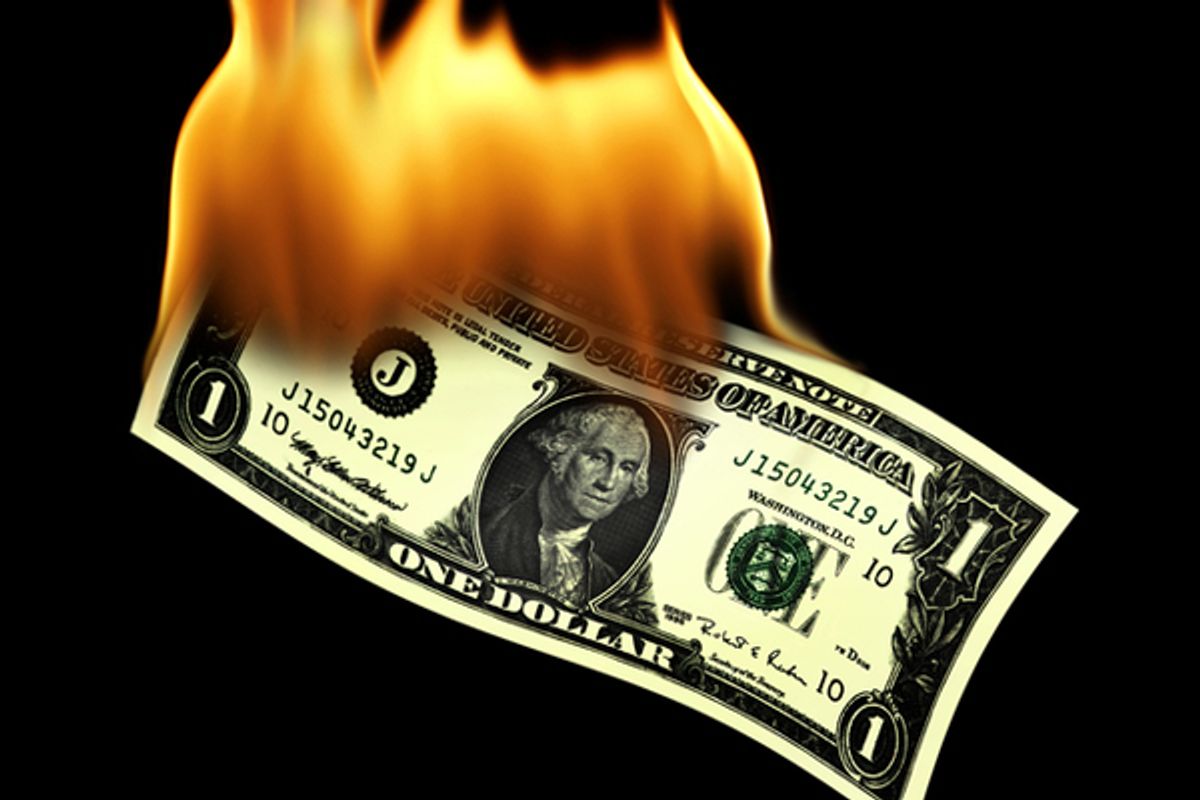 This article is an adapted excerpt from the new book, "Greenback Planet," from the University of Texas press.

"It's China's World. We Just Live in It," Fortune announced in October 2009. The accompanying article described a prospecting trip in Africa by officials of the China National Offshore Oil Corporation. Nigeria was renewing production licenses in its oil fields, and CNOOC was aiming to elbow aside such traditional players as Exxon Mobil and Royal Dutch Shell. "The Beijing-based company wants to secure no less than one-sixth of the African nation's production," the article asserted. "And CNOOC, apparently, isn't screwing around." China's sudden appearance distressed the existing licensees but delighted the Nigerians. "We love this kind of competition," a spokesman for the government said.

The Fortune piece went on to describe other properties the Chinese were snapping up. Just the previous month the China Investment Corporation, the government's sovereign wealth fund, had spent a billion dollars on a minority stake in a Kazakhstan oil and gas company. About the same time the CIC paid $850 million for part of a Hong Kong trading firm. The China Development Bank floated Brazil a $10 billion loan to underwrite exploration off the South American coast. "So far this decade," the Fortune correspondent recounted breathlessly, "China has spent an estimated $115 billion on foreign acquisitions. Now that the nation is sitting on massive foreign-exchange wealth ($2.1 trillion and counting), it is eager to find something (anything!) to invest in besides U.S. Treasury debt."

The nineteenth century had been the era of the gold standard, the twentieth of the dollar standard. What the twenty-first century will be is anyone's guess. But some guesses have been more credible than others. The dollar has had a good run. It made America rich; it saved democracy; it defeated communism. Yet it suffered from its very success. As the closest thing to a world currency, it knitted the planet into a single economy more fully than any currency before. In doing so it spread prosperity more widely than prosperity had ever been spread, but it diluted prosperity for those steelworkers in America, maize farmers in Mexico, cobblers in Italy who found they couldn't compete in the new world market.

And it magnified the effects of the instabilities that have always afflicted dynamic markets. The financial panics of the early nineteenth century in America were local affairs, confined to a modest number of firms and affecting comparatively few people. The panics of the late nineteenth century had national effects, with some transatlantic connections via the gold standard, yet most of the world hardly noticed. In the modern era -- the era of the dollar -- the world couldn't help noticing. The panic of 1929 helped trigger the global crisis of the 1930s. Not by accident did the nations of the world, gathered in London in 1933, listen for Franklin Roosevelt to declare the value of the dollar and thereby decree their fate. Richard Nixon's closing of the gold window in 1971 rocked financial markets from London to Tokyo and Buenos Aires to Bombay. The dot-com bubble of the late 1990s burst in Silicon Valley but blew out lights in Bangalore and Mumbai (Bombay's new name), Shanghai and Taipei, Seoul and Sydney.

And then things got really hairy. The first years of the new century witnessed risk-taking on a scale never experienced before and hardly ever imagined. Wall Street leveraged debt in real estate, in corporate shares, in derivatives, in a hundred other instruments that paid dizzying returns when the markets smiled and exacted harrowing revenge when the markets growled. Foreign firms, big and small, joined the action; the tiny country of Iceland became a banking powerhouse and the richest nation in the world on a per capita basis until the financial markets crashed and left the country staggering under a debt equivalent to seven times its total annual production. The Persian Gulf city-state of Dubai commenced a building program that would have made the Egyptian pharaohs weep tears of envy down their pyramids, until the bill came due and the government said it might have to default on $60 billion of loans. Half a world away the Dow dropped 200 points on the news; Asian markets plunged even more.

The global connections amplified the effects of the casino economy in America, corroding the social compact on which the dollar's domestic success had been based. Ordinary Americans had rarely begrudged the wealth of the few, partly because they believed the wealth was fairly earned and partly because they hoped they or their children might become wealthy someday. But the compact weakened when corporate executives took home tens of millions of dollars a year even as workers' pay stagnated, and it nearly failed when those same workers found themselves, through their tax dollars, cleaning up the mess the executives had created and guaranteeing, in many cases, the fat cats' exorbitant compensation.

The anger spilled over against the Fed, the institution that had done more than any other to manage the dollar's dominion. "Ben S. Bernanke doesn't know how lucky he is," financial writer James Grant said. "Tongue-lashings from Bernie Sanders, the populist senator from Vermont, are one thing. The hangman's noose is another." Grant explained that the Coinage Act of 1792 mandated the death penalty for any public official who fraudulently debased the dollar; Sanders and others blamed Bernanke for debasing the dollar by letting the casino economy spin out of control. "For many years I held the Federal Reserve in very high regard," Richard Shelby, the ranking Republican on the Senate banking committee, said. "I fear now, however, that our trust and confidence were misplaced." Bernanke was summoned to Congress and compelled to plead contrition. "There were mistakes made all around," the Fed chief acknowledged. "I did not anticipate a crisis of this magnitude and this severity. We should have required more capital, more liquidity. We should have required more risk-management controls."

Bernanke's mea culpas saved his job; he was appointed to a second term as Fed chief. But they did nothing to ease the strain on the dollar. America was caught on the horns of a dilemma: reducing the deficit in the short term required raising taxes, but raising taxes risked stifling a recovery and aggravating the deficit in the long term. "Doing the prudent thing about deficits now would be an extremely foolish thing," economist Paul Krugman observed.

The problem appeared intractable. James Grant proclaimed a "Requiem for the Dollar" in the Wall Street Journal. "The dollar is faith-based," Grant said. "There's nothing behind it but Congress. And now the world is losing faith, as well it might." The dollar's good years were all in the past. "The greenback is a glorious old brand that's looking more and more like General Motors."

The dollar's demise, if it came to that, would be America's problem, but the world's as well. Much of the planet has come to depend on the dollar, and replacing it would be difficult and painful. No alternative reserve currency made a compelling claim. Use of the euro is spreading, but the EU's money lacks the ubiquity of the greenback, and efforts to rescue the Greek government have revealed deep rifts in the euro zone. China's currency, the yuan, isn't even traded on world markets. Japan's once-mighty yen still floundered two decades after Tokyo's swoon. Besides, with so much of the world invested in the dollar, the costs of changing over to another root currency would be prohibitive.

But the alternative to the dollar need not be a single currency. When Gao Xiqing and others spoke of a second Bretton Woods conference, they envisioned replacing the dollar with a market basket of moneys. No one of the currencies need be as strong as the dollar had been; together they could do what the dollar no longer could. The market basket approach had its own problems, but as time passed and the American deficit continued to grow, the dollar doubters seemed ever more likely to have their way. Financial power talked, just as it had for the Americans at the first Bretton Woods conference.

A postdollar world would look different than what Americans were used to. The American economy couldn't help but suffer, at least comparatively. The strength of the American economy had made the dollar's hegemony possible, but the dollar's hegemony had preserved and extended the economy's strength. Americans could devalue the dollar and thereby transfer costs of domestic reform to the rest of the world, as Franklin Roosevelt demonstrated in the 1930s. Americans could have guns and butter despite an imbalance of international payments, as Lyndon Johnson showed in the 1960s. Americans could export inflation and cushion themselves against oil price rises, as Richard Nixon and his successors revealed in the 1970s. In a postdollar world such finesses and acts of force majeure would be far more difficult; the American economy would have to stand more solidly on its own footing.

By 2010 the decline of the dollar was already limiting America's freedom of action. The debate over healthcare reform during Barack Obama's first year turned as much on what the competing proposals would do to the federal deficit as on what they implied for patients and doctors. The cost of the wars in Iraq and Afghanistan, which passed a trillion dollars in 2010, effectively ruled out additional elective wars, almost regardless of the provocation. Ben Bernanke and the Fed didn't take a step without considering how the Chinese and other big creditors would respond.

In a postdollar world Americans would learn to get by with less. The consumer binge of the 1990s and early 2000s had been financed by foreign lending; as foreign lenders diversified their portfolios Americans would be compelled to live within their incomes again. The adjustment threatened to be traumatic; the newly enforced thrift was translating into unemployment in the consumer sector, recently a pillar of the American economy. The layoffs wouldn't be temporary, but structural; the superfluous sales clerks, shelf fillers and advertising executives would have to retool for other work. In the economy of thrift, real estate values would take years or decades to return to their prebust levels. Builders reported that the McMansion, the trophy home of the boom years, was giving way to a downsized model of the American dream.

On the other hand, perhaps the dollar's run wasn't finished. Indeed, by making the changes the dollar's decline would force on them, Americans would increase the greenback's chances of remaining the planet's reserve currency. Whether this would be a good thing for America or for the planet wasn't obvious. The dollar era had been a time of global growth, but of global fragility as well. Perhaps the growth was possible without the fragility; perhaps a new generation of financial leaders would discover how to keep booms from becoming busts; perhaps fresh minds could halt ambition short of hubris.

H.W. Brands taught at Texas A&M University for sixteen years before joining the faculty at the University of Texas at Austin, where he is the Dickson Allen Anderson Centennial Professor of History. His books include "Traitor to His Class," "Andrew Jackson," "The Age of Gold," "The First American," and "TR." "Traitor to His Class" and "The First American" were finalists for the Pulitzer Prize.