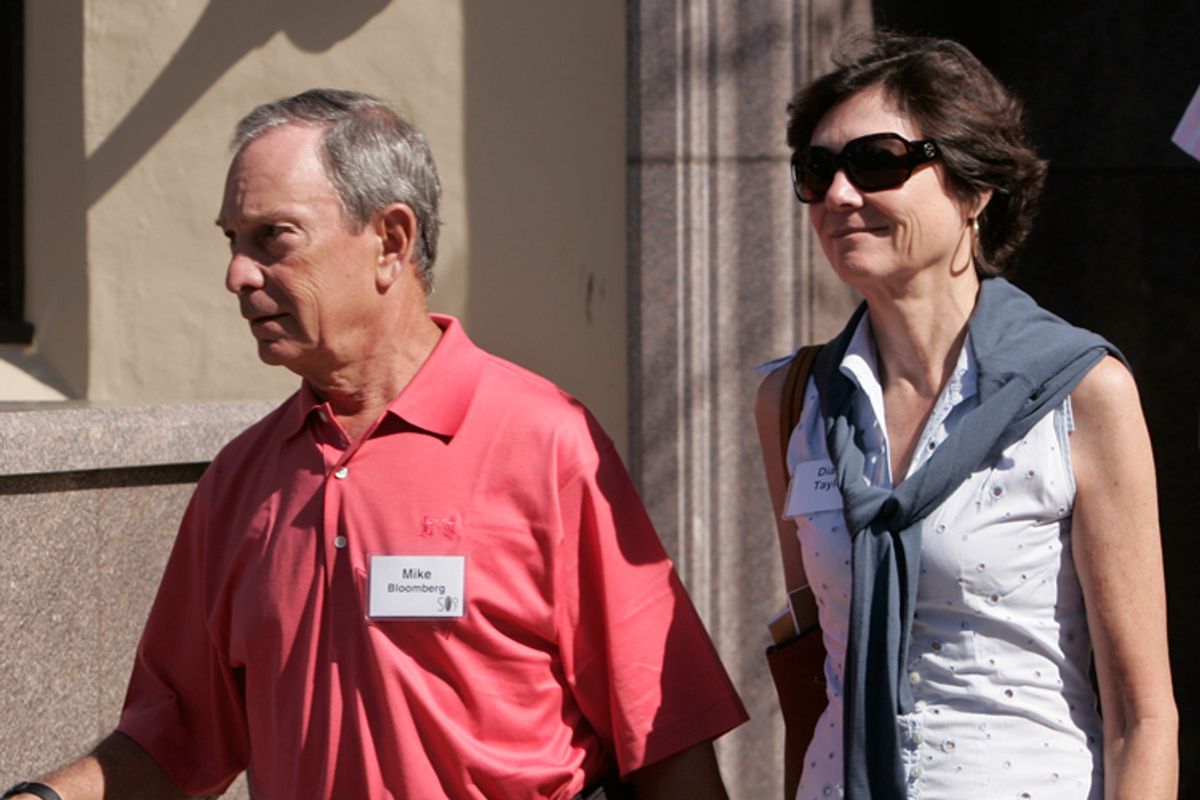 Mayor Michael Bloomberg's longtime girlfriend sits on the board of the company that owns the park where Occupy Wall Street protesters are camped out, and the NYPD is on the record saying that it's the company's call how long the protesters get to stay.

In other words, Bloomberg himself not only controls the NYPD, but also has a hand on the levers of power at Brookfield Properties, the huge real estate firm that owns Zuccoti Park (aka Liberty Square).

Bloomberg's girlfriend is Diana Taylor, a former state banking official who is now an executive at the investment firm Wolfensohn & Co. She has for years been the unofficial first lady of New York. She is also on the board of Brookfield.

The connection was first reported by the blog LittleSis.

I've asked the mayor's press office whether Bloomberg has discussed the protesters and the park with Taylor; I will update this post if I hear back.

At a community board meeting in lower Manhattan Wednesday night, an NYPD representative said that whether the protesters can stay is ultimately Brookfield's call. Capital New York reported on the meeting:

"What would have to happen is that a representative from Brookfield would go into the park, and say, 'You're in violation of the rules of the park that apply. You're trespassing,'" Detective Rick Lee of the NYPD's community affairs office told attendees.

They pressed him to be sure: It’s Brookfield’s move to make, then?

"That's the scenario," Lee said. "Politically, when that button is going to be pushed is beyond my pay grade."

John Zuccoti, the namesake of the park and also a member of Brookfield's board, told the Times this week that "my guess is that we basically look to the police leadership and mayor to decide what to do" about the protesters.

So in one scenario it is Bloomberg's call whether the protesters stay. And in the other scenario, it is the company's call -- the company in which Bloomberg has direct influence via his girlfriend.

Taylor's own politics appear to be unfriendly to the protesters. She recently complained, for example, that President Obama "wasn't supporting business." Bloomberg himself has derided the protesters.

A spokeswoman for Brookfield did not immediately return a call seeking comment about Taylor. The company has said publicly that the protesters are breaking the park’s rules. But I have not seen reports that Brookfield has gone as far as asking the NYPD to evict the occupiers.

For more on the legal questions surrounding sleeping in Zuccoti Park, which has an unusual public-private status, check out this analysis in the New York Law Journal.