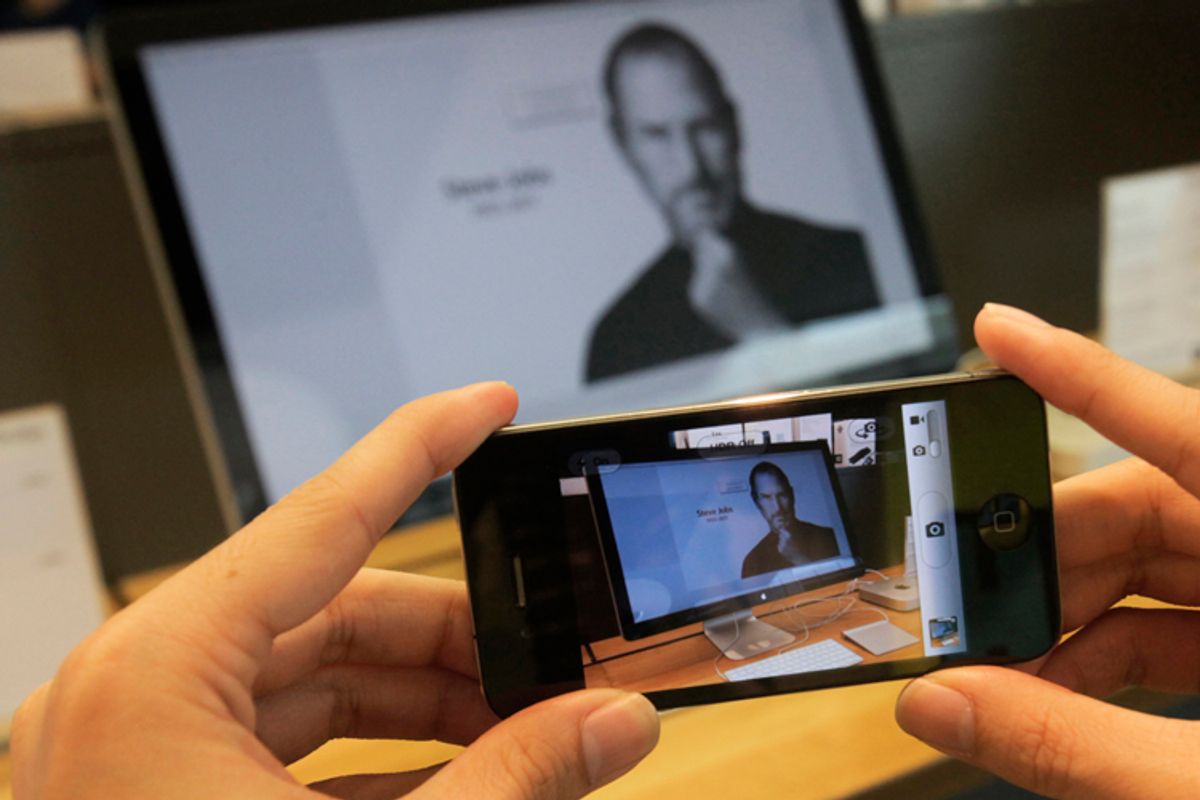 Soon after news of Steve Jobs’ death emerged Wednesday, millions of hashtags, posts and YouTube videos erupted on Facebook and Twitter to memorialize his life and express sadness for the loss of a technology visionary. Twitter alone was overrun with 2.5 million tweets about Jobs in the 12 hours after he died. As someone who revolutionized the digital world, it seems eminently appropriate that mourners took their grieving online -- especially since social media has, in many ways, helped reinvent the way we approach death in modern society.

First, it gives people who have something to say an unprecedented audience that’s both instantaneous and quintessentially democratic. The eulogy is no longer the preserve of the great and the good. Online, anyone can be a broadcaster, a commentator or a curator of news and information.

Social media has also awakened the newshound in many of us. We want to be the first to comment, and when it comes to death, we no longer have to sit back passively and wait for the obit in the next morning’s newspaper. Moreover, we can be part of a popularity contest, as blogs listing the "10 most quoted tweets about Steve Jobs" demonstrate.

Using death as a competition to produce the fastest tweet or the post with the most hits might seem a little self-serving and, frankly, insensitive. But there’s more to this than just a race to be first. Collective mourning is important in any society. It unites us and gives us permission to contemplate personal loss -- to pull those deep reserves of grief out from their hiding places. Social media assists this process. More of us can engage when, rather than having to walk to a remembrance site (or an Apple store) with a yellow ribbon or drive to a roadside shrine with flowers, we can sit at home and tap out our feelings.

When it comes to grieving, social media gives us instant, global connectivity as well as a rich palette for expression. Online, text, photographs, audio and video mean we can easily share memories and broadcast public reflection. Essentially, technology is turbo-charging the process of collective mourning.

However, social media also returns to us things we’ve lost -- a few rules, for a start. Today’s secular society gives little guidance on how to deal with grief. In the absence of traditional mourning rituals, we struggle in the face of death. What should we say? What should we do? In societies where ritual remains strong, no one needs to ask how to express loss or honor the dead. Specified times and places for grieving are part of carefully defined of cultural conventions. The rules allow for emotion but set boundaries for mourners, preventing unfettered anguish from being let loose.

If rituals provide ways of containing our grief, online formats do something similar. They give us room for creativity but they also set limitations (in the case of Twitter, that’s 140 characters). Whether it’s Facebook’s wall, an online newsfeed or a tweet, online formats establish the kinds of frameworks that help us hold it together when we feel we’re falling apart.

Technology also gives us back convening power. For death has never -- at least until recently -- been a solitary affair. You still see it in the Jewish tradition of sitting Shiva, with friends and neighbours visiting the bereaved during the seven-day mourning period. In New Guinea, the moment someone from the Mafulu tribe of dies, all the men start shouting loudly -- or at least they did in 1910, when ethnologist Robert Wood Williamson, recorded details of their death rites. This was partly to scare off evil spirits, but as the chain of shouts moved from village to village, residents from surrounding valleys poured into the home of the deceased as word spread that the community had just lost one of its members.

Obviously, this isn’t so easy today. Friends and family are dispersed more widely than ever. In this globalized world, we need to find ways of shouting about our dead and places in which to gather to express empathy and support. And if we can’t do that physically, we can do it online. As humans, we’re hardwired to form communities and to unite at our most significant moments. So while in volume, speed and global reach, what we saw on Wednesday in the wake of Steve Jobs’ death was new, in some ways it was nothing more than a high-tech version of a practice that’s been going on for centuries -- the practice of getting together to say goodbye.

Sarah Murray is author of “Making an Exit: From the Magnificent to the Macabre -- How We Dignify the Dead” (St Martin’s Press, October 11, 2011); www.makinganexit.net, @makinganexit, makinganexit.tumblr.com