What's inside "The Human Centipede"?

Is this shock-horror franchise the sickest outrage in movie history, or a work of demented genius? Neither 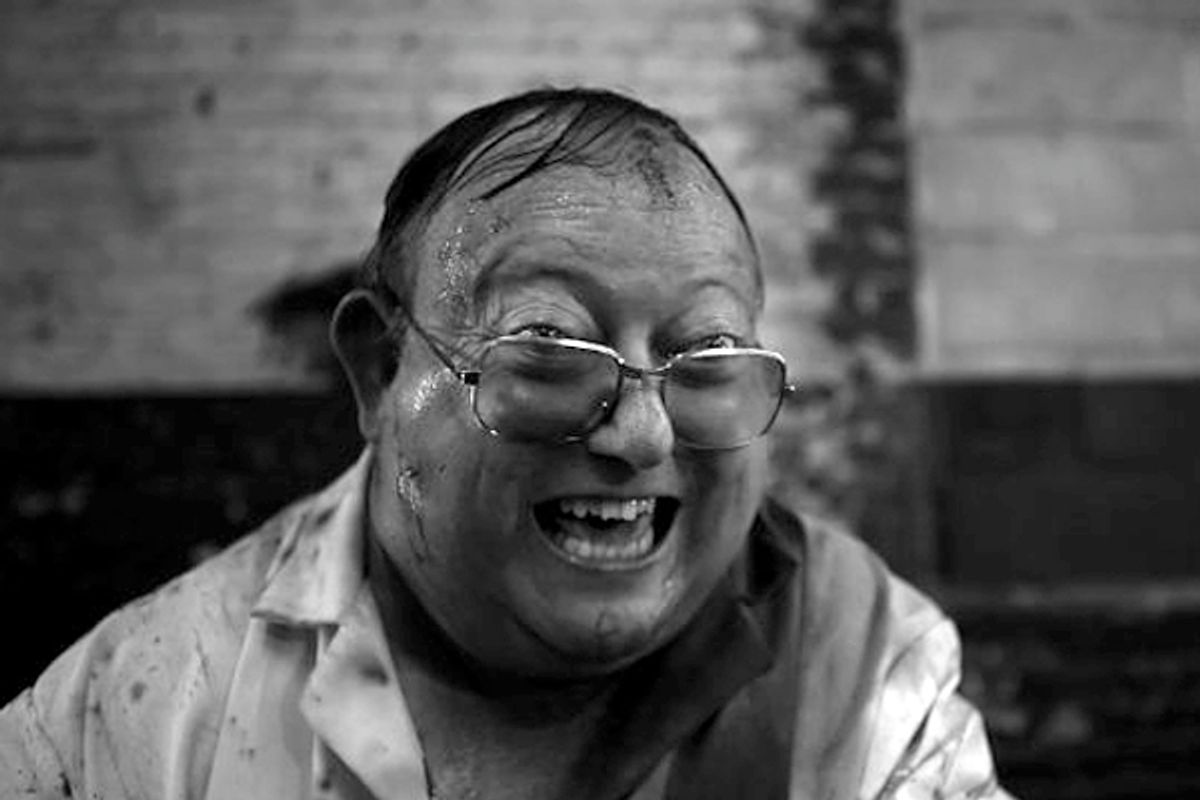 It only took two films for the "Human Centipede" franchise to venture into metatextual, art-school territory, or at least into a reasonable facsimile thereof. (A simulacrum thereof?) Usually you have to get five or six films into a horror series, at least, before some bored director gets too clever for his britches and comes up with something like "Wes Craven's New Nightmare" (still my fave example of this tendency) or "Jason X," which actually rips off Andrei Tarkovsky's "Solaris."

But in Dutch writer-director Tom Six's new "The Human Centipede II (Full Sequence)," the references and allusions pile up like pages of a cultural-studies dissertation. The central character, played by English character actor Laurence R. Harvey, is a squat London parking-lot attendant named Martin who looks more like Peter Lorre's child-killer in Fritz Lang's classic "M" than Peter Lorre does -- with the added gag that children are the only category of person that Martin doesn't want to kill. Martin, you see, is obsessed with the first "Human Centipede" film, watching it over and over again in his underground lair, and determines to outdo Dieter Laser's Mengele-like evil surgeon from that movie by stitching together a dozen abducted strangers into a single pseudo-organism, except without any of the requisite tools or medical knowledge. (If you don't know much about these movies and don't quite get what I'm talking about -- well, just be happy about that.) He even lures in Ashlynn Jennie, an actress in the first "Centipede," under the premise that she's auditioning for Quentin Tarantino, which leads to a dash of actual humor amid the adolescent shock-fest. She made sure everybody showered before the centipede scenes, Jennie tells Martin. "I mean, you're gonna be near people's butts, and you don't want to smell anything." Oh, ho ho ho.

Martin's nightmarish home life, which features a harpy mother, a violent neighbor and echoes of sexual abuse, along with peristaltic, subterranean sound effects, is borrowed nearly wholesale from David Lynch's "Eraserhead." The film's black-and-white cinematography variously suggests underground Japanese horror films, a decayed 1980s British "video nasty" on VHS (if not Betamax), and the classics I've already mentioned. At the New York screening I attended, Six told us that the intrusion of color in the film's most memorably disgusting sequence is meant as a tribute to "Schindler's List," and I think he's not entirely kidding. At least, he's not kidding about that any more than the entire "Centipede" thing is a tendon-severing, ass-to-mouth, here's-feces-in-your-eye Grand Guignol gag.

In Six's international controversy-starter from 2009, "The Human Centipede (First Sequence)," Laser's character -- a disgraced surgeon who lives alone in the German forest, like a post-Third Reich wicked witch -- stitches three hapless tourists together into a single pseudo-organism. It had the affectless, almost clinical manner of a low-budget European horror movie -- blending, say, Michael Haneke's early work with grade-Z American exploitation cinema -- and at first I assumed that was what it actually was. Silly me. Now I can see that the whole first movie must be understood within quotation marks, as a self-conscious gesture or imitation. And the second one, like Six's entire enterprise, is more like an endless chain of references to other things, as well as a juvenile game of Can You Top This? Even worse, it's a pseudo-intellectual game, one in which the point is not just to épater the old bourgeoisie -- at which Six succeeds admirably -- but also to congratulate oneself for rising above outrage and indignation.

I'm striving to maintain a neutral tone here because I think that's the best way to deflate this silly, clever, disgusting and ultimately meaningless project to a reasonable scale. Moral condemnation is exactly what Six wants, on some level (although he has now edited "Centipede II" enough to get it unbanned in Britain -- sellout!), and anyway I don't believe that movies, no matter what outrages they depict, turn people into deviants. But the other thing he wants is to be taken seriously as a high-low auteur with something to say -- check out the movies' pompous-ambiguous titles, with parentheses and big words and everything! -- and that's even more ludicrous. A recent tweet from dry-witted critic and blogger Glenn Kenny pretty well sums it up: The "Centipede" franchise, he wrote, is the "biggest piece of cultural suckerbait since the first Black Sabbath LP." In other words, it provokes a lot of generalized, extracurricular wailing about moral decay and the seduction of the innocent and Kids These Days, none of which has much to do with the work in question, or anything else. (For the record, Kenny likes that Sabbath record and I can't stand it. Chacun à son outrage.)

I'm willing to defend the first "Centipede" film, up to a point, although I'm now inclined to believe that just means I was that taken in by its Brothers Grimm Euro-blankness and cheap production values. It's restrained and sober, at least as movies about people being mutilated by madmen go, and almost despite itself has a half-serious, Holocaust-themed undertow about the possibility of remaining human in inhuman circumstances. But "Human Centipede II," the middle chapter in a planned trilogy that will apparently end in America, is more like a perma-teenager's idea of dark and disturbing excess. Six has joked that he wanted to make the first movie look like "My Little Pony," and wanted to show those who were shocked and outraged what a real outrage looked like. The results are technically capable, undeniably clever, unremittingly depressing and thoroughly nauseating, so, sure, check all the boxes. But what's really depressing is that some viewers may be deluded into thinking there's something of substance in "Centipede II," when it's more like a DC Comics version of Pier Paolo Pasolini's notorious "Salò, or The 120 Days of Sodom," with the sweeping condemnation of Western culture stripped out and the mean-spiritedness cranked to 11. If you want to check this out for a stomach-turning giggle, don't let me stop you. But please, let's not pretend it means more than that.