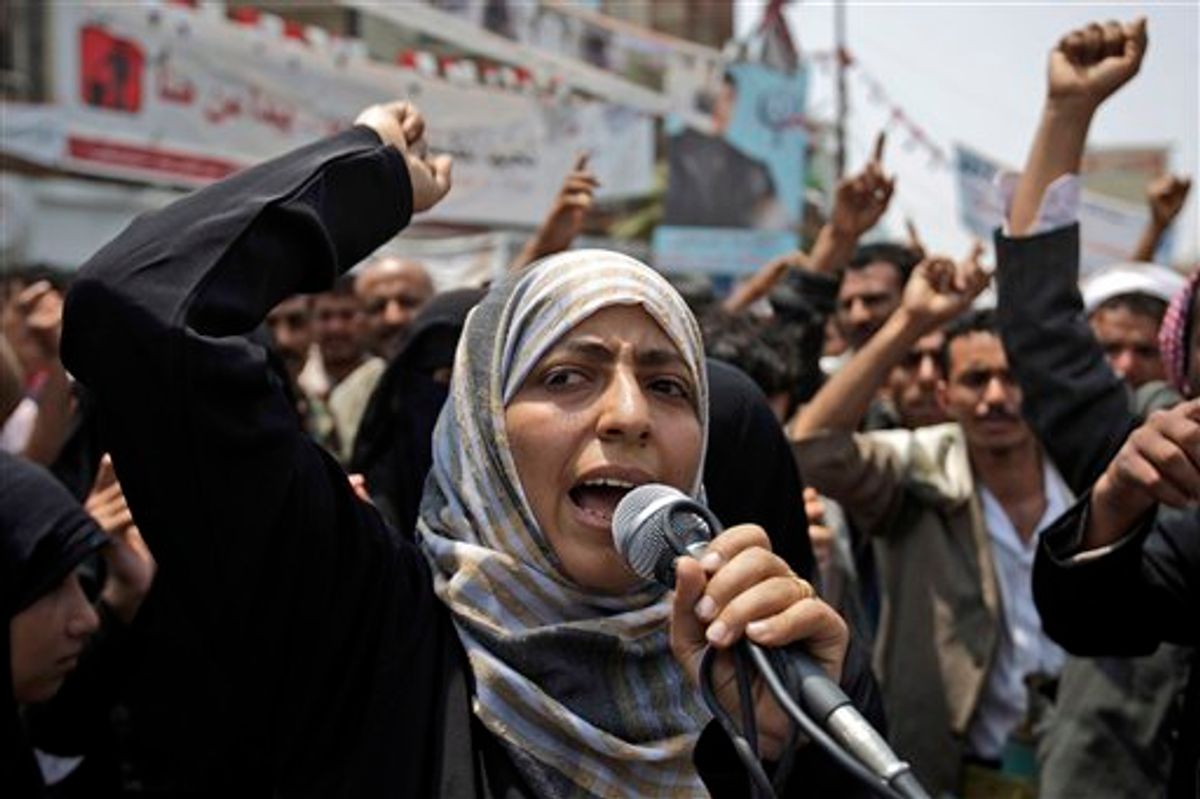 Africa's first democratically elected female president, a Liberian campaigner against rape and a woman who stood up to Yemen's autocratic regime won the Nobel Peace Prize on Friday in recognition of the importance of women's rights in the spread of global peace.

The chairman of the Norwegian Nobel Committee told The Associated Press that Karman's award should be seen as a signal that both women and Islam have important roles to play in the uprisings known as the Arab Spring, the wave of anti-authoritarian revolts that have challenged rulers across the Arab world.

"The Arab Spring cannot be successful without including the women in it," Jagland said.

He said Karman, 32, belongs to a Muslim movement with links to the Muslim Brotherhood, the Islamist group "which in the West is perceived as a threat to democracy." He added that "I don't believe that. There are many signals that that kind of movement can be an important part of the solution."

Yemen is an extremely conservative society but a feature of the revolt there has been a prominent role for women who turned out for protests in large numbers. The uprising has, however, been one of the least successful, failing to unseat President Ali Abdullah Saleh as the country descends into failed state status and armed groups take increasingly central roles. In Libya's and Syria's uprisings, women have been largely absent. And while there were many women protesters in Egypt's revolution, few had key leadership positions.

Karman is a mother of three who heads the human rights group Women Journalists without Chains. She has been a leading figure in organizing the protests against Saleh that kicked off in late January.

"I am very very happy about this prize," Karman told The Associated Press. "I give the prize to the youth of revolution in Yemen and the Yemeni people."

Citing the Arab Spring alone could have been problematic for the committee. Libya descended into civil war that led to NATO military intervention. Egypt and Tunisia are still in turmoil. Hardliners are holding onto power in Yemen and Syria and a Saudi-led force crushed the uprising in Bahrain, leaving an uncertain record for the Arab protest movement.

Jagland told AP it was difficult to find a leader of the Arab Spring revolts, especially among the many bloggers who played a role in energizing the protests, and noted that Karman's work started before the Arab uprisings.

"It was not easy for us to say to pick one from Egypt or pick one from Tunisia, because there were so many," he said. "And we did not want to say that one was more important than the others."

Karman "started her activism long before the revolution took place in Tunisia and Egypt. She has been a very courageous woman in Yemen for quite along time," Jagland said.

No woman had won the prize since 2004, when the committee honored Wangari Maathai of Kenya, who died last month at 71. 2004 was also the last year the prize went to an African.

Liberia was ravaged by civil wars for years until 2003. The drawn-out conflict that began in 1989 left about 200,000 people dead and displaced half the country's population of 3 million. The country -- created to settle freed American slaves in 1847 -- is still struggling to maintain a fragile peace with the help of U.N. peacekeepers.

Sirleaf, 72, has a master's degree in public administration from Harvard University and has held top regional jobs at the World Bank, the United Nations and within the Liberian government.

In elections in 1997, she ran second to warlord-turned-president Charles Taylor, who many claimed was voted into power by a fearful electorate. Though she lost by a landslide, she rose to national prominence and earned the nickname, "Iron Lady." She went on to became Africa's first democratically elected female leader in 2005.

Sirleaf was seen as a reformer and peacemaker in Liberia when she took office. She is running for re-election this month and opponents in the presidential campaign have accused her of buying votes and using government funds to campaign. Her camp denies the charges. The election is Tuesday.

"This gives me a stronger commitment to work for reconciliation," Sirleaf said Friday from her home in Monrovia. "Liberians should be proud."

Buttons from her presidential campaign say it all: "Ellen -- She's Our Man."

Jagland said the committee didn't consider the upcoming election in Liberia when it made its decision.

"We cannot look to that domestic consideration," he said. "We have to look at Alfred Nobel's will, which says that the prize should go to the person that has done the most for peace in the world."

"Who? Johnson Sirleaf? The president of Liberia? Oooh," said Tutu, who won the peace prize in 1984 for his nonviolent campaign against white racist rule in South Africa. "She deserves it many times over. She's brought stability to a place that was going to hell."

U2 frontman Bono -- who has figured in peace prize speculation in previous years -- called Sirlaf an "extraordinary woman, a force of nature and now she has the world recognize her in this great, great, great way."

Gbowee, who organized a group of Christian and Muslim women to challenge Liberia's warlords, was honored for mobilizing women "across ethnic and religious dividing lines to bring an end to the long war in Liberia, and to ensure women's participation in elections."

Gbowee has long campaigned for the rights of women and against rape. In 2003, she led hundreds of female protesters through Monrovia to demand swift disarmament of fighters who preyed on women throughout Liberia during 14 years of near-constant civil war.

Gbowee works in Ghana's capital as the director of Women Peace and Security Network Africa. The group's website says she is a mother of five.

"I know Leymah to be a warrior daring to enter where others would not dare," said Gbowee's assistant, Bertha Amanor. "So fair and straight, and a very nice person."

Karman is from Taiz, a city in southern Yemen that is a hotbed of resistance against Saleh's regime, and now lives in the capital, Sanaa. She is a journalist and member of Islah, an Islamic party. Her father is a former legal affairs minister under Saleh.

Long an advocate for human rights and freedom of expression in Yemen, she has been campaigning for Saleh's ouster since 2006 and mounted an initiative to organize Yemeni youth groups and opposition into a national council.

On Jan. 23, Karman was arrested at her home. After widespread protests against her detention -- it is rare for Yemen women to be taken to jail -- she was released early the next day.

Karman has been dubbed "Iron Woman, "The Mother of Revolution" and "The Spirit of the Yemeni Revolution" by fellow protesters.

During a February rally in Sanaa, she told the AP: "We will retain the dignity of the people and their rights by bringing down the regime."

The peace prize was in line with Norway's development aid strategy, which is often focused on women's rights. Norwegian Prime Minister Jens Stoltenberg called the award "important and worthy."

In his 1895 will, award creator Alfred Nobel gave only vague guidelines for the peace prize, saying it should honor "work for fraternity between nations, for the abolition or reduction of standing armies and for the holding and promotion of peace congresses."

The peace prize is the only Nobel handed out in Oslo, Norway. The other five awards -- in medicine, physics, chemistry, literature and economics -- are presented in Stockholm.