Pick of the week: "Hell and Back Again" shows the true cost of war

Pick of the week: A gung-ho Marine comes home a wreck in the lyrical, haunting documentary \"Hell and Back Again\" 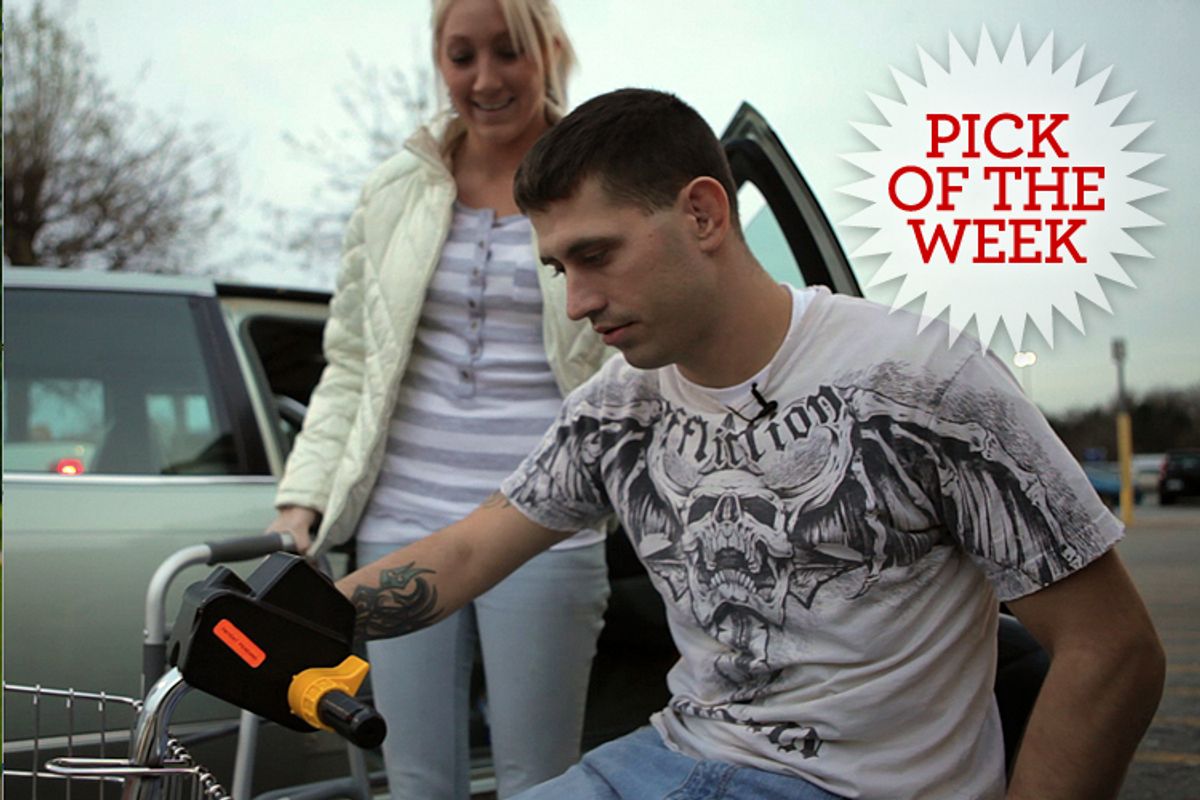 When Sgt. Nathan Harris' Marine company was sent behind Taliban lines in southern Afghanistan in the summer of 2009, as part of a major assault meant to extend the Afghan government's control deep into rebel territory, their commanding officer delivered an inspiring speech, telling his men that Echo Company would change history, and that "the world will notice what you do here." It didn't. Back in the Wal-Mart in suburban North Carolina, where Harris sometimes shows total strangers the gruesome scar that runs from his right buttock all the way to his ankle, it seems more like the world doesn't really want to know much about what happens in Afghanistan, where a decade of war has produced no clear results, at prodigious and debilitating cost.

I don't think photojournalist-turned-filmmaker Danfung Dennis includes that officer's speech in his compassionate and unsettling documentary "Hell and Back Again" (winner of a Grand Jury Prize and a cinematography prize at Sundance) for some heavy-handed ironic effect, or to score political points. This isn't that kind of movie. There have been several powerful war documentaries about the conflicts in Afghanistan and Iraq (I'd put Tim Hetherington and Sebastian Junger's "Restrepo" and Janus Metz's "Armadillo" at the top of the list), but perhaps none with the intimate, human, tragic and sympathetic impact of "Hell and Back Again."

Dennis was embedded with Harris' company during some absolutely terrifying firefights, and you definitely see the war from a grunt's-eye view. On Dennis' first day, a corporal in Echo Company is fatally injured a few yards away from him, and in a later scene, an Afghan soldier's weeping comrades retrieve his body from the battlefield, literally in pieces. But this film is only partly about the violence, chaos and trauma of war. Dennis later followed Nathan Harris back home, and recorded a remarkable portrait of an American marriage, and of how the ripple effects of warfare carry over into civilian life.

Depending on how you look at it, Nathan Harris was either lucky or unlucky. A combat-hardened, gung-ho Marine veteran who'd served several tours of duty in the Gulf region, Harris understood the risks. He came home alive and with all his limbs after getting shot up in a Taliban ambush, about two weeks before the end of his scheduled deployment. After several operations, many bottles of painkillers and a year or more of rehabilitation, it's possible his shattered hip and leg will heal well enough to let him walk normally. But the guy we see back in North Carolina is a total mess: Moody and angry, frequently nauseated from pain and heavy doses of narcotics, waving loaded handguns around the house, possibly suffering from paranoid delusions. He says he finds an overcrowded parking lot at the mall more stressful than Afghanistan, where "everything is clear."

In his more lucid and less threatening moments, Harris makes a fascinating protagonist, an intelligent, funny, slyly handsome fellow without much formal education who has learned what he knows about human beings and the world from the discipline and violence of warfare. He joined the Marines at 18, he says, because he "wanted to kill people," and we get the impression he's done his share of that. Clearly he now feels more misgivings about that, although he makes a forceful argument -- lying on the sofa, with his injured leg in a therapy device -- in favor of the war in Afghanistan. If it isn't an argument I happen to agree with, you can't claim that Harris hasn't thought about it, or is just a brainwashed robot following orders.

Dennis' other central character, at least on the home front, is Harris' wife Ashley, a petite young woman with a two-tone blonde dye job who seems alternately baffled and terrified by this man she barely recognizes. If Ashley's getting any kind of counseling or formal support, we don't see it in the movie; the title, in fact, comes from a remark she makes during a conversation with a pharmacist at Walgreen's while she's refilling Nathan's many prescriptions. Sometimes she looks at him and his eyes look soulless, he seems to contain nothing but rage, she tells the woman. They've been through hell and back, but they still love each other.

"Hell and Back Again" ingeniously intercuts scenes from the Afghan combat zone and scenes from the Harrises' new life in North Carolina, and once again I don't think Dennis is making some obvious point about the difference in material privilege or living conditions. Those factors are part of the story, certainly, but when we move from the walls of a Walgreen's outside Winston-Salem to the walls of a mud compound outside Mosul, I think he's emphasizing that those places are more closely connected than we think. Nathan Harris is quite right, in a way, to view the shopping mall as a war zone, even if it doesn't look like one to those of us with less experience. This is a lyrical and humane film in the finest documentary tradition, which honors its subjects by telling their story with great dignity and painful clarity and leaving judgment to history.

"Hell and Back Again" is now playing at Film Forum in New York. It opens Oct. 14 in Los Angeles; Oct. 21 in San Francisco; Oct. 28 in Dallas; Nov. 4 in Philadelphia and San Diego; and Nov. 18 in Denver, Seattle, Tacoma, Wash., and Washington, D.C., with more cities and home-video release to follow.