How I ended up at Kim Kardashian's wedding

I\'m a college professor who\'d never even heard of the reality star. Then she got engaged to my nephew 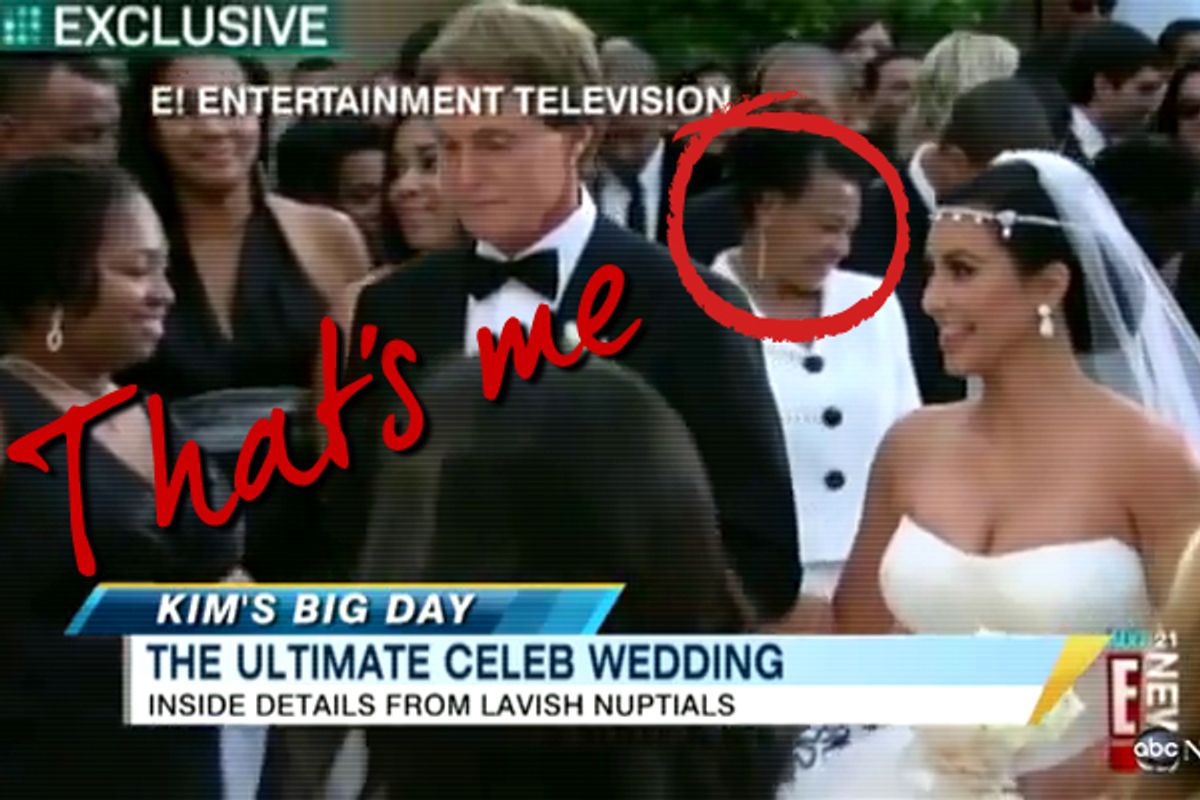 I haven't had a television in the house since our 13-inch black and white Sony died 25 years ago. National Public Radio plays 24-7, and papers from the writing class I teach at Lansing Community College mix with the sports pages on my dining room table. When I heard that my nephew Kris Humphries had a famous girlfriend, I had to ask my hairdresser Heidi, "Who is this woman? What's she famous for?"

Heidi was blunt. "Her big ass. And her sex video. And her reality show. In that order."

I can't say I saw all that in the glossy magazines. Still, Kim Kardashian is proof a woman can have a life after sex. And Kris’ relationship with her proves his maturity. That's worth celebrating in the 21st century.

He’s always been sensible about long-term goals. His junior year of high school, he and his parents stayed at our house on a college recruiting trip to Michigan. He bunked his 6'9" frame as best he could in my daughter's twin bed. I retired late that night, and saw light under the bedroom door. I found Kris lying in the twin bed, his long legs bent to fit. On the pillow was his textbook. He gripped a pen over a notebook.

He wanted to go to a college that would take him to the next level in basketball: the NBA. In seven years, starting at 19, Kris has played basketball for the Utah Jazz, the Toronto Raptors, the Dallas Mavericks and now the New Jersey Nets. Like his family of college-educated professionals -- attorneys and police, accountants and investors, social workers, managers, nurses, doctors and teachers -- Kris worked hard for success. Yet, celebrity found him on a date with Kim Kardashian. Whatever else she has done with her life, Kim was my nephew's girlfriend, then his fiancée. Now, she's his wife.

Until this Sunday, when the E! network airs a two-part wedding special, many of the details are very hush-hush. It's the Kardashian family's deal, but it's so like Kris. As the tallest of the tall people in our family, he grew up a bit self-conscious; the teenage Kris hid from prying eyes. And, like any kid, he needed his family's support.

His wedding was no different. Whatever it took, I was going to attend. What it took was a secret decoder ring. Let me explain.

The first wedding invitation to arrive was a heads-up. It was from my younger brother and Kris' father, William, a stock broker turned money manager. He and his wife have entertained us over the years. Filet mignon has been served.

In an email, William wrote: "Here are the places you may want to stay while attending Kris and Kim's wedding. You can coordinate your credit card #s with the wedding planner … Or call the hotel directly."

What followed was a list two computer screens long. The hotel rooms up top cost $2,000 a night, and bottomed out at $300 a night. I wanted to ask, where is the third screen of rooms priced for a Michigan community college professor? And the financial aid application?

But I didn't. A family wedding blows up over other simpler things.

The hotel addresses hinted at the location for the big day, but there was no clue as to the date. I asked William these details straight away because, you know, the price of airfare goes up every day. What was I to say to the airline? "I need a roundtrip ticket somewhere, sometime"?

Maybe I shouldn't have bothered my brother for those details. The families had a lot to do. I received William's email July 9 -- just seven weeks had passed since Kris proposed with a 20-carat diamond ring. Maybe I should have checked for the wedding date in the glossy magazines lining my grocery store check-out lane. That's how I decided what dress to buy.

Cosmo magazine quoted Kim as saying she planned to have an Old Hollywood wedding. The Hollywood of Bette Davis and Joan Crawford. I went looking for a dress like that. At the little shop named Scavenger Hunt across from the Michigan State University campus, I found a gorgeous, slinky, Dorothy Dandridge-style dress. And it was vintage. You know, old.

I laid the full-length burgundy lace dress out on the counter, next to a sign advertising a 30% off sale. The smiling clerk moved a tray of mood rings.

I'd found the dress two days earlier, when I told a different clerk what I needed it for. I had savored the awed look on her face when I said, Kim Kardashian's wedding. I was hesitant to buy it then, since the store had a no-return policy, but my husband assured me I could afford a $15 dress ($11 with the discount), so I was back.

"How do you know her?" this new shop clerk whispered.

What I told him was, I didn't.

But a week later another email came, this one from my sister-in-law, Kris' mom, who said we were to wear clothes that were black and/or white. That's what Kim meant by "Old Hollywood." So I stored my lace dress. From a friend's white clothes closet I picked a gleaming suit with black buttons and black succotash trim around the hem.

Three weeks later the second wedding invitation arrived. In a FedEx box. Inside another box. Like Russian nesting dolls.

This formal invitation announced Aug. 20 as the date and Montecito, Calif., as the place. A little booklet -- what my sister called Chapter Two of the invitation -- said to bring photo identification and leave recording devices. No cell phones. It also included our parking pass for the Montecito Country Club. Now that they'd told me an exact place, would they have to kill me?

No. Apparently, we were to be driven from there to the secret wedding site.

Here's what happened: About 4:45 Saturday afternoon Aug. 20, I arrived with my husband, Michael, our daughter, Terri, and son, David, at the Montecito Country Club parking lot. One of a long line of waiting valets jumped to take our rental car. I walked through a metal detector, flashed my photo ID and signed a release allowing cameras to record and use my image. And I had my mug shot taken.

I asked the photographer, what for? She said she didn't know.

We boarded black shuttle vans. I settled in a window seat and was driven into the land of the lavish. I paid no attention to how many corners we turned or in what directions, as I gawked at the police officers directing traffic and the fans gathered along a few blocks. Their hand-lettered signs said, CONGRATULATIONS KRIS AND KIM. WE LUV YOU KIM.

I waved to them. And smiled and laughed. Just like a reality TV celebrity, my life on full display -- or would have been if the van windows hadn't been smoked.

The van delivered us to the bottom of a hill. We walked up the long drive to a mansion. Inside we picked up our place cards.

Here's one thing I'll spill about the wedding: The drinking started right away. On the garden terrace before the wedding, we were offered our choice of sparkling water with a lime slice or a glass of lemonade. Immediately after the wedding, two open bars commenced serving, expensive free liquor, my husband and son said.

Waiting in the garden for the wedding to begin felt a lot like other exclusive parties I'd covered as a newspaper reporter in Detroit. It didn't connect with me that my nephew was changing his lifestyle from Midwestern to Hollywood. And quite possibly it never will. I was just a proud member of the Humphries family ready to support Kris on his journey, which now led to a union with a rich, famous woman. Witnessing his marriage felt as right as providing him a bed.

Kris looked handsome and nervous in front of the minister. He surveyed his side of the aisle to find a cast of 40 relatives, including both grandmas. The sumptuous surroundings melted away.

Awwww, I sniffled, Kris is getting married.

After seven hours, at midnight (maybe even later), we exited the estate. Right away, a valet asked for our ticket. How could that be? We'd left the car and these valets some distance away. Immediately, I was transported back to being an 8-year-old.

Growing up in Detroit, my 12 siblings and I never went anywhere except school, church and grandma's house. On school field trips, my 8-year-old mind thought that the purpose of the bus ride was to give officials time to change the school into the place they told us we were going. Limited thinking, yes, but not just to me because the Kardashian's had changed the Montecito Country Club parking lot into the wedding estate. And they'd done a great job. Because my car was here. Waiting for me.

"What kind of car is it?" the valet asked.

We had been driving that rental all week, but I didn't know.

Soon a black car pulled in front of us. The valet hopped out. The interior spotlight fell on a pink Krispy Kreme donut box on the front passenger seat.

How was I supposed to know?

Under the steering wheel, I clicked my seat belt, gripped the gearshift. My secret encounters of the celebrity kind were over, but I absolutely couldn't leave before finding out one last little thing.

I leaned out the window and said: "Tell me, where am I?"

Dedria A. Humphries is a native of Michigan whose essays have been published in Redbook magazine and The Detroit News. She is at work on a book about football moms, entitled "Balls."

MORE FROM Dedria A. Humphries