Pop art and monochrome at the Guggenheim: An illustrated primer 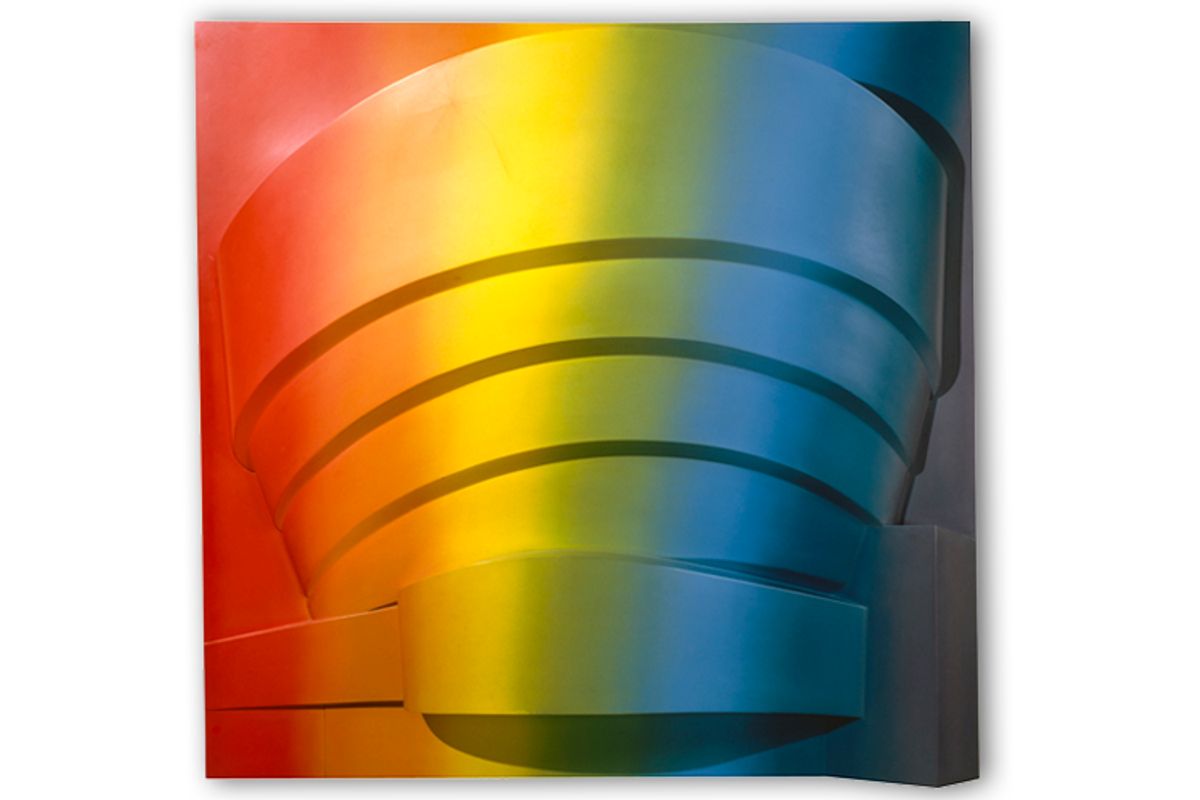 This fall, sibling exhibitions at New York City's Solomon R. Guggenheim museum explore different approaches to the challenges of aesthetic articulation in the mid- to late-20th century -- from the consumerist obsessions of Warhol and the exaggerated pixels of Roy Lichtenstein to the blunt, introverted monochrome of artists such as Robert Ryman and Ellsworth Kelly.

Read the curators' thoughts below, and click through the following slide show to see some of the works they discuss, complete with Hinkson and Fontanella's explanatory captions.

How is American pop art distinct from European pop art?

The terminology and initial critical thinking for the movement did originate in England in the mid-1950s, as a product of the Independent Group and with its roots in Dada, but pop art simultaneously exploded on the art scene in the United States. Here, it would reach its fullest incarnation and thrive in the 1960s ... Unlike those working in England, who turned to technology and popular culture largely for subject matter, American pop artists actually mimicked the logic and serial nature of mass production with mechanically produced work, such as Andy Warhol’s silkscreen paintings, or imitated the style of commercial art, as with Roy Lichtenstein’s trademark simulation of the Benday dots used in image reproduction. For this Guggenheim collection exhibition we've assembled largely works by American precursors and participants in the pop movement — with British artist Richard Hamilton the main exception. But the two Hamilton works we are exhibiting are decidedly American: rainbow-colored and monochromatic reliefs of the Guggenheim Museum. —Megan Fontanella

The works featured in this exhibition come from the Guggenheim's own collection. Can you talk a little bit about the role the Guggenheim itself, and its curator, Lawrence Alloway, played in the shaping and support of the American pop art movement?

One of the most vital eras in the Guggenheim’s history began in 1962 when the British curator and art critic Lawrence Alloway joined the staff. In the late 1950s Alloway had been a member of the Independent Group and is credited with coining the term "pop art" to denote the creative aspects of vernacular culture. Alloway’s influence at the Guggenheim was immediate as he was charged with organizing key exhibitions of American art. "Six Painters and the Object," held in 1963, was Alloway’s first major show at the museum and was only the second exhibition in the United States to attempt to define American pop art. The Guggenheim exhibition took place during a time when many institutions shied away from pop art’s transgressive mixing of "high" and "low" cultures. Alloway established a historical tradition for the work, providing a framework for understanding and validating the movement’s importance. The Guggenheim demonstrated an ongoing commitment to these artists with monographic shows of Roy Lichtenstein, Jim Dine, Claes Oldenburg, Robert Rauschenberg, James Rosenquist and Andy Warhol in subsequent years. —Lauren Hinkson

Two high-profile Warhol exhibitions opened in Washington, D.C., around the time the first part of the "Pop Objects and Icons" exhibition opened at the Guggenheim. Is there a reason all these exhibitions are coming up at once? Do you think the pop movement's consumerist preoccupations, and heavy media references, resonate particularly powerfully in 2011?

With the Guggenheim's fall exhibition program featuring a major retrospective of contemporary Italian artist Maurizio Cattelan's work, as well as a focused exhibition surrounding Vasily Kandinsky's "Painting With White Border" (May 1913), we felt this was an opportune moment to examine the museum's mid-century collections. Many of the works in this exhibition haven't been on view at the museum in some time, and they are among the most beloved pieces in the collection. We hope visitors will agree that pop art remains as fresh and vibrant today as it did 50 years ago. The humor and wit of the work still resonates with contemporary audiences.

[The other collection presentation we are co-curating], "Surface, Support, Process: The 1960s Monochrome in the Guggenheim Collection," ... include[s] painting and sculpture that is contemporaneous with — but radically different from — pop art. Together these distinct and yet related presentations will demonstrate the multifarious ways in which artists reacted to the large gestural canvases and expressive colors of the previous generation of Abstract Expressionists. —Megan Fontanella

If you had to single out two or three particularly important or surprising works from the exhibition, which would you choose, and why?

I'm personally looking forward to seeing Claes Oldenburg's "Soft Pay-Telephone" (1963) [Slide 1] on display when the second pop art gallery opens on Nov. 19. This work hasn't been on view at the Guggenheim in some 10 years and it's always been a favorite of mine. Oldenburg was a prominent figure in Happenings and performance art during the late 1950s and early 1960s, and he's one of four living artists represented in "Pop Object and Icons." The artist's stuffed vinyl sculpture, including this pay telephone, may be seen as substitutions for and references to the human body. Through their malleable forms and susceptibility to the effects of gravity, these supple sculptures often suggest anatomical parts. Passive and limp, but potentially arousable, the pieces allude to the sexual. By asserting the sensual through the mundane, Oldenburg explores the ways in which everyday objects are so much an extension of our physical selves. And in terms of popular culture and the appropriation of everyday objects, in this era of cellphones it's fun to see an object (the pay telephone) that is so much a relic of another time. —Megan Fontanella

For me, the only British pop artist included in the exhibition and such an influential figure in the pop art movement, Richard Hamilton’s two fiberglass reliefs, "The Solomon R. Guggenheim (Black and White)," (1965–66) and "The Solomon R. Guggenheim (Spectrum)," (1965–66), [Slide 2] stand out as especially significant. The artist’s recent passing makes the inclusion of these works even more salient. The reliefs are part of a series of six works the artist created based on a color postcard of the Guggenheim building, which in less than a decade had become an iconic image in its own right. Hamilton studied photographs of the museum along with Frank Lloyd Wright’s plans for the building before making his own elevations, sections and preparatory sketches, prints and eventually the reliefs. The "edition" aspect of Hamilton’s Guggenheim series is consistent with Pop art’s preoccupation with screenprints, multiples, and serial productions. —Lauren Hinkson