They come to Slab City, out of work and low on hope, to endure heat, sandstorms and life on the edge 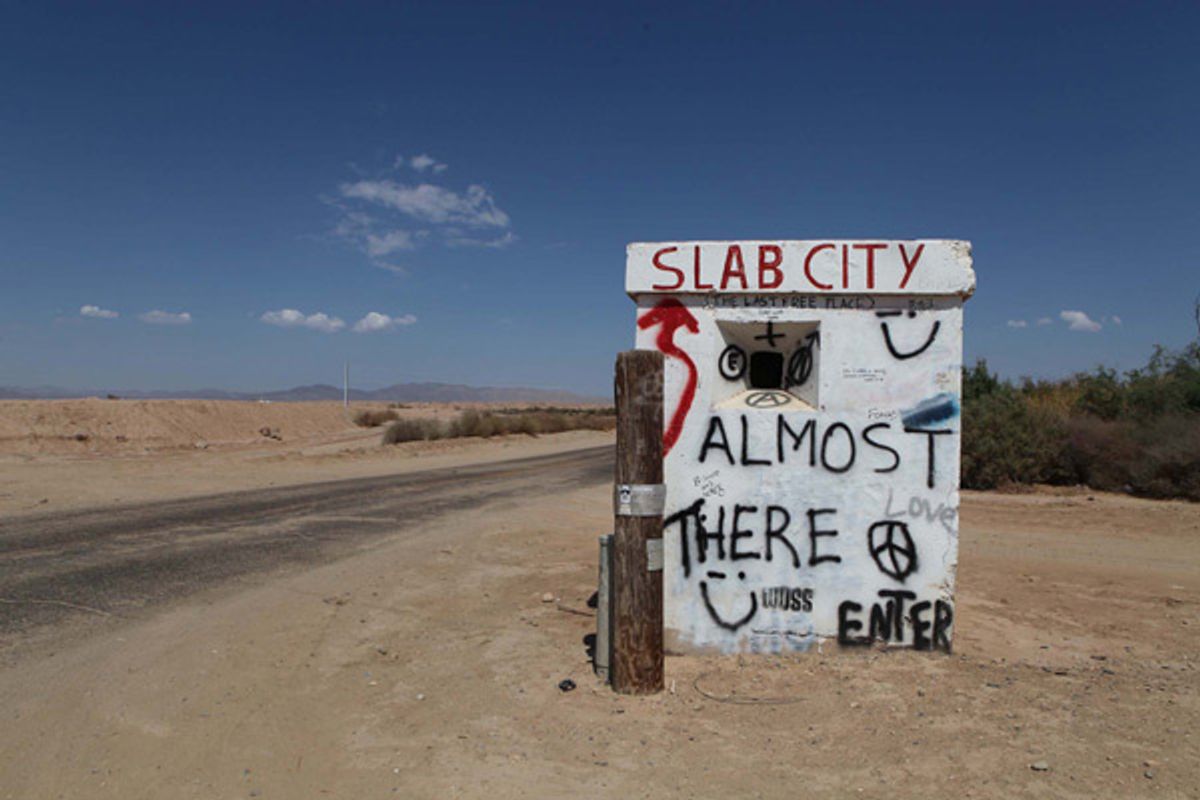 How George Carranco wound up in Slab City, a squattersville at the end of the earth, is a story for these hard times.

Carranco, an ex-Marine and jack-of-all-trades, lost his job at a factory in San Diego when it shut down, lost his apartment when he couldn't pay the rent, lost his temporary home when the city towed his van, and lost the van for good when the parking fees climbed to unattainable heights. More than a thousand dollars -- might as well have been a million.

Three years of bad breaks later, Carranco had had enough. He revived an '83 Dodge camper that he picked up for free and, with his girlfriend and five Chihuahuas, headed east, 155 miles from San Diego, to where the roads give up and the desert takes over.

Unwittingly, the 56-year-old Carranco had joined the latest wave of migrants to Slab City: refugees of the recession. Beaten down by a brutal economy, they're straggling to this desolate outpost of societal dropouts to recover their wits and duck the national malaise.

Of course, Slab City is no city, and no picnic. Some 640 acres of state-owned sand and scrub near the Salton Sea, it offers no electricity, no sewerage, no running water. Once, it was a Marine training base. When it was decommissioned, nothing was left but the concrete slabs where barracks once stood. Gradually, people with souls to mend or demons to kill started camping on the slabs.

Maybe after the apocalypse the world would look like Slab City. Slabbers live in trailers, trucks and old buses scattered as though a twister had tossed them up and dropped them. Power comes from solar panels, batteries and portable generators -- you're rich here if you have one. Signs and structures are made from tires, wires and spare parts.

Until recently, only about 75 to 100 people called Slab City home all year, and they have their own sad stories to tell, usually involving breakups, bankruptcies or booze. But these days, they're more interested in talking about the newcomers, who've swelled the ranks of the year-round population to about 200.

It says something about the state of the nation, slabbers will tell you, shaking their heads, when Slab City is becoming more of a refuge for the down and out than ever before.

"Some people come by foot," said Ben Morofsky, who is 49 and has lived in Slab City for 22 years. "They've lost everything."

Tent cities started cropping up all over the country once the recession began taking its toll, and a couple, like Dignity Village in Portland, Ore., or Nickelsville, in Seattle, are officially sanctioned by city officials. Dignity Village even makes prospective residents fill out applications

But there is no squat in the country like Slab City. Here, residents make the rules as they go along, and county and state officials let them be unless real trouble happens. Rarely does a sheriff happen by. It's even rarer still that one is summoned. Utter detachment from the rest of society may be Slab City's main attraction.

While there are no official statistics on Slab City -- no one counts who comes and goes -- judging from interviews here, the newcomers are trekking to the slabs from all over. Seattle to Staten Island, San Diego to Tennessee. Single men, mostly, in their 40s and 50s. But couples, too. Even a few families.

"It's not the best place for kids," said James Edward, who moved to the slabs nine months ago from Montgomery, Ala., with his wife and two children, 11 and 14 years old. Edward, 38 years old, was working as a regional manager for the Applebee's restaurant chain, he said, for many hours and not enough pay. He looked and looked, he said, but could not find a better job. So he and his wife decided to ride out the economy at the slabs.

People come here out of desperation. But like Edward, many also want or need a reprieve from the newest normal, where workers toil longer for the same pay in jobs they hate but fear losing. They've heard of Slab City through the 2007 film version of "Into the Wild," and like the rich pageant of life the movie displays.

"Into the Wild's" Slab City is a hobo-boho Shangri-La. People live free and happy, selling books to tourists for a living, cooking communal meals. They take visitors to Salvation Mountain, a three-story sculpture made of clay, straw and paint that stands near the entrance to the slabs. They have nightly concerts, strum guitars, clink beers around warming fires.

That's the Slab City that a 25-year-old woman who hitchhiked to Slab City from Kansas wanted when she decided she didn't want to worry about paying bills all the time. It's the Slab City that attracted a 48-year-old man who had left his landscaping business in Staten Island for a relationship in Oregon that failed, leaving him with nothing. "Into the Wild" showed him, he said, that there was a happy alternative to going back to Staten Island a bum and moving in with his parents.

Slabbers are friendly. And Slab City does hold weekly concerts. But it is hardly a romantic life.

Only the strong or the mad survive here. During the summer, temperatures reach 125 degrees in the shade, and the runty Joshua trees are precious and few. Just living is a full-time job. Water, which residents buy in the nearby town, is always being hauled, boiled or bottled. Everything is rationed, and chores like washing dishes or cooking take twice as long as in the real world. Bathing is a luxury, one indulged only when very necessary.

The broken-down town of Niland, five miles west, provides a grocery store and post office. For gas or more shopping, slabbers head to Calipatria, 12 miles south, Brawley, 25 miles south, or across the border to Mexicali, about 50 miles down, where a dollar still buys more than it does in the States.

Most slabbers survive on government checks, food stamps and donations from ministries. Come winter, when hundreds of trailered retirees, or snowbirds, descend on the slabs for the season, the regulars make money doing odd jobs for them. Some newcomers come with a little money in their pockets. Others, like Carranco, rely on the kindness of slabbers.

Carranco, with no cellphone or post office box, had been waiting for word from his girlfriend, who had an actual job and a place to stay near Palm Springs, for nearly two months. Then she came back, broke up with him, took their Chihuahuas and his food stamp card.

"Thank goodness for charity," Carranco said, rocking himself on the remains of a recliner outside his lean-to. It was 105 degrees, getting dark and he had no source of power save for a solar light on top of his camper and batteries for his portable stereo.

A wiry man with sharp cheekbones, black hair to his shoulders and a growing beard, Carranco looks like an apostle from Da Vinci's "Last Supper." After a couple of months, new slabbers look like they've lived here forever. The men grow beards, the women go gray. People age in dog years. Even the children.

Minister Patrick McFarland, who runs the Slab City Christian Center, a trailer more popular for its daily bread offerings than its sermons, has watched newcomers flee as if being chased.

"It's kind of a raw experience," McFarland said. "People don't expect how hard it is." He and his wife ran a ministry for outlaw bike groups in Joshua Tree, Calif., before moving here a year and a half ago. Then he was diagnosed with bladder cancer and had to leave for treatment. Back for six months, McFarland still seemed to be adjusting.

He was wondering, he asked an Imperial County sheriff's deputy who had led an out-of-town visitor to the slabs, whether he could carry a firearm if it was concealed, or displayed?

Neither, without a permit, the deputy said.

"Then, I could carry a knife, I guess," McFarland said.

The Christian Center had been burglarized a few times, Carranco said, as had his own encampment. The old-timers blamed newcomers who haven't learned slabber rules.

Jerry Ray Jones, who has lived 62 years the hard way, 26 of them in Slab City, said any article should warn newcomers away.

When he arrived, he said, with a story too long to tell, only about 10 people lived in Slab City. They were bona fide loner types. Crack, meth and liquor brought more people to the slabs, and other reasons. Outright poverty was never No. 1 before now.

You're a real slabber if you can stick out more than one summer, the saying goes here. But Mary Dillon and her husband had lasted three summers -- "Into the Wild" brought them -- and they never felt at home.

They were in Niland, buying ice and supplies to take on the road. Dillon, who is 52, said she and her husband were going back to Washington state. They had just sold their trailer, were checking their mail, and were taking off.

Dillon's husband, a 66-year-old retiree, didn't want to talk or give his name. He said it was just better that way, given the topic was Slab City.

"We don't want no trouble," Dillon said, though she managed to give a sheriff's deputy an earful about some goings-on at the slabs. "We just want a normal life again." They had 1,300 miles to drive, and were looking forward to it.