How I learned to love weddings 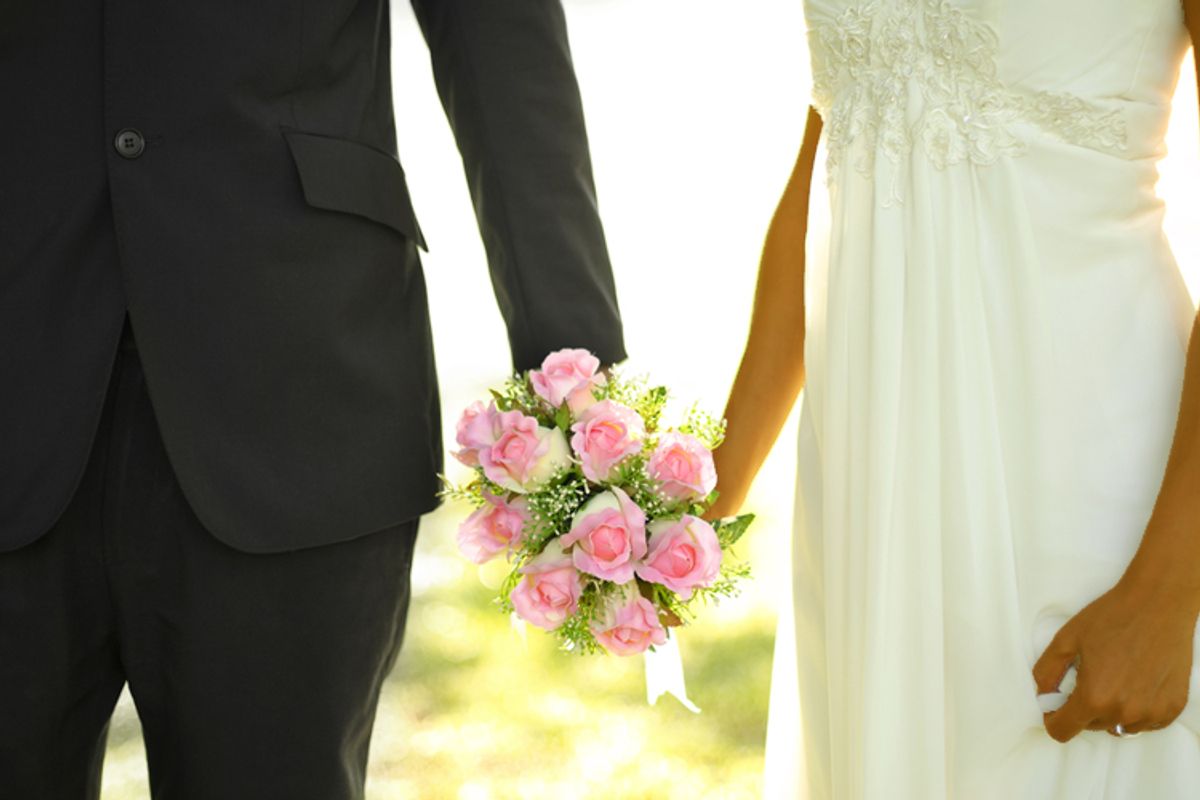 I was crying before the bride even walked down the aisle.

In fact, the tears came as soon as my cousin Conroe, the bride's older brother, made his way across the lawn to the lakefront altar. He was pursing his lips in a way I've only seen him do before at a family funeral; and, sure enough, he soon began dabbing at his eyes. As the procession of bridesmaids and groomsmen continued, I managed to compose myself -- and take a glug of wine that I was awfully premature in ordering. But then the bride, my cousin Ari, appeared with her dad holding her arm. My uncle was giving away his little girl and this made the tears come heavy.

I used to always recoil in dismay at the notion of a father "giving away" his daughter. What patriarchal nonsense! "Both my parents will be walking me down the aisle, and they won't be 'giving me away,'" I would say. Except, it turns out my mom won't be around by that time (it was a surprise she even survived until this wedding, let alone that she managed to board a plane and fly to Las Vegas, of all places, in-between chemo treatments). Life often blindsides you like that, and my uncontrollable waterworks at my cousin's wedding was no exception.

I was never a fan of ceremonies. I skipped both my high school and college graduations because I found the ritual a meaningless waste of time -- blame it on my heretical hippie upbringing. I've maintained the same kind of eye-rolling disdain for traditional weddings, along with an ever-expanding list of feminist grievances over the outdated symbolism of the white dress, the diamond ring, the handoff of a woman from one man to another -- and so on and so forth. Add the recent battle over same-sex marriage to the mix, a growing awareness of the rarity of couples actually staying true to their supposedly sacred marriage vows, and I became quite the wedding cynic.

Make no mistake, I still am, but this ceremony pierced through my skeptic's heart. Not because I found myself suddenly enamored with nuptial tradition, but because I was appreciating everything else. Like that my cousin and uncle were not so much giving away their sister and daughter as recognizing the significance of this new phase of her life. She was starting her own family, and making ours bigger. Underneath all the pageantry, here were two families and friend groups that were coming together -- and what an unconventional group it was. The groom grew up in Guyana with a black father and a white mother, and the bride grew up in northern California with the same parental racial split. The mix of ethnicities and accents in the room was awe-inspiring.

My family is good at unconventional. I flew to the wedding with my parents and my ex-boyfriend, my high school sweetheart, who has become an unofficial adopted brother. It's mildly incestuous, I suppose, but I wouldn't have it any other way. My parents took him in at 17 as his family life crumbled around him. During the wedding dinner, the ex and I ended up talking about marriage and kids -- something that at age 18 we were certain we would experience together -- and he volunteered that maybe some day he would adopt. "Genes don't matter. Your parents proved that to me." We don't talk all that often, but when it comes to my mom and the prospect of her no longer being around, we understand each other best; aside from him, I'm an only child.

I guess cancer, or any terminal illness, has the effect on loved ones of making you especially sentimental about family, wherever and however you find it. For months, my mom has lived for this wedding -- not that she didn't have anything else to live for, but she hated to think of missing this ceremony. She planned her chemo treatments and blood transfusions accordingly, and cried when she got a cold because she worried it would prevent her from making it. This, from a woman who read Wordsworth instead of Bible verses at her ceremony, kept her last name and bequeathed me with an unwieldy hyphenated mouthful, and wears no ring but has been with my dad, happily, for over 30 years.

It all made me realize how unimportant tradition is -- which sounds exactly like what I felt before, but it's immeasurably different.