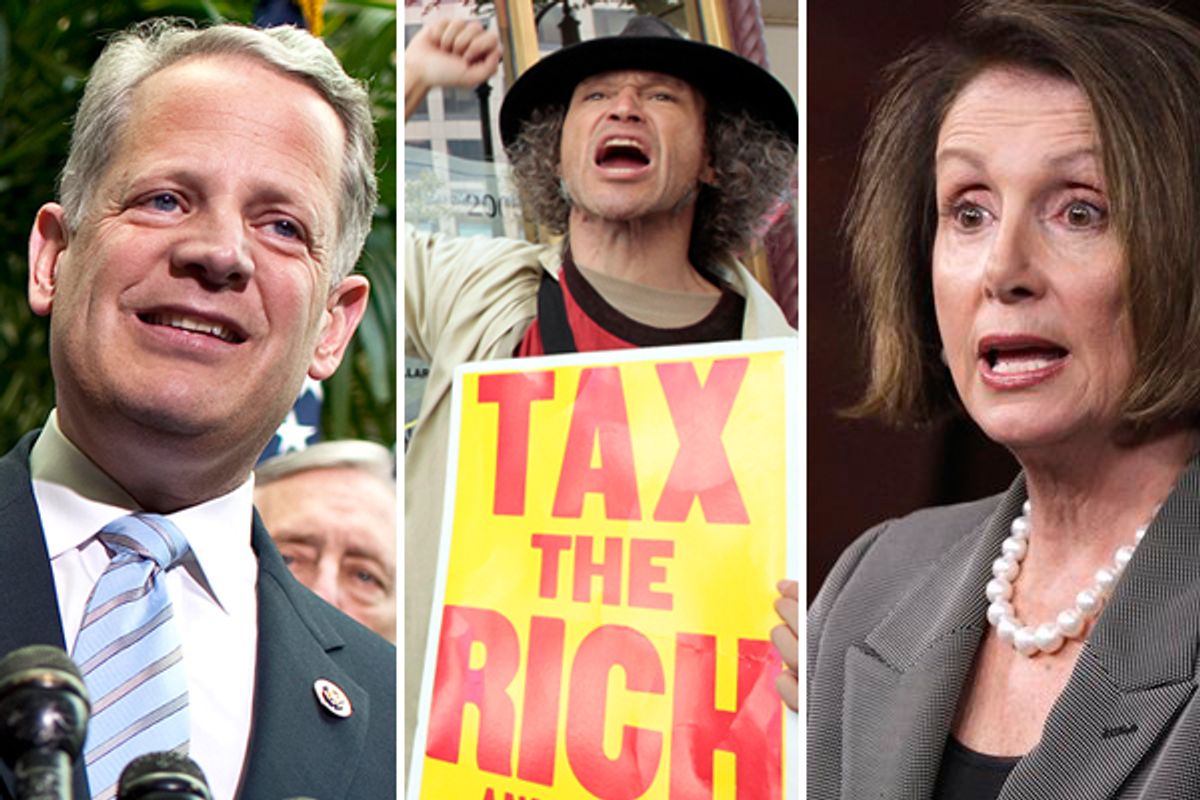 A lot has been made in the last few days of increasing Democratic Party support for Occupy Wall Street. Some within the movement have expressed fears of co-optation. Some on the right have argued that the Dems are blundering by throwing in their lot with a group of putative radicals. And so on.

The irony is that the same elected Democrats singing the praises of Occupy Wall Street are themselves major recipients of money from … Wall Street!

Does this mean that the Democratic embrace should be rejected? Not necessarily. Occupy Wall Street could, of course, open up political space for Democrats to address unemployment, income inequality, criminality by banks, the overwhelming influence of corporate money in politics and so on. But it's worth keeping in mind that most if not all of these politicians have been cozy with Wall Street for years; so there are grounds for suspicion.

Take the Democratic Congressional Campaign Committee (DCCC), the party organization that collects money for House races around the country. It is now soliciting signatures (along with email addresses for its database) for a petition in support of Occupy Wall Street.

"Protestors are assembling in New York and around the country to let billionaires, big oil and big bankers know that we’re not going to let the richest 1% force draconian economic policies and massive cuts to crucial programs on Main Street Americans," the DCCC pitch reads.

It asks people to sign a letter telling Republicans, "I stand with the Occupy Wall Street protests because it's time to take the country back for the middle class."

But the DCCC has sucked up cash from Wall Street as much as any entity in politics. The DCCC received $4.6 million from the securities and investment industry in the 2010 cycle. In the 2008 cycle, the DCCC took in $6.4 million from the securities industry. The only group that gave more was lawyers and law firms. Current DCCC chair Steve Israel, a Dem from Long Island, has been hailed for his skill in wooing the financial industry. Politico reported last month that part of the reason the DCCC is outpacing its Republican counterpart in fundraising is Israel's "easy access to Wall Street."

Then there's House Minority Leader Nancy Pelosi. "God bless them for their spontaneity," she said of the protesters a few days ago. "It's young, it's spontaneous, it's focused and it's going to be effective." She continued: "The message of the American people is that no longer … will the recklessness of some on Wall Street cause massive joblessness on Main Street."

In the current election cycle, Pelosi has raised more money -- $105,000 -- from the securities and investment crowd than from any other industry. In the 2010 cycle, Pelosi and her political action committee took in another $180,000 from the industry. In 2008 it was $243,000, a total that included donations from lobbyists representing Goldman Sachs and JPMorgan.

President Obama, for his part, has not expressed support for Occupy Wall Street, but said at a news conference last week he understands what's going on.

"I think it expresses the frustrations the American people feel, that we had the biggest financial crisis since the Great Depression, huge collateral damage all throughout the country ... and yet you're still seeing some of the same folks who acted irresponsibly trying to fight efforts to crack down on the abusive practices that got us into this in the first place," he said.

In June, Obama  traveled to New York for a $35,800-per-plate dinner with the Wall Street bankers who are the target of the occupiers' anger.

Among those who were to dine with Obama at Daniel were Robert Wolf, chairman of UBS Americas; Blair W. Effron, partner and co-founder of Centerview Partners LLP; Marc Lasry, managing partner and founder of Avenue Capital Group; Mark Gallogly, a managing principal of Centerbridge Partners; James Rubin, managing director of BC Partners; and Frank Brosens of Taconic Capital Advisors LP, according to a party official who spoke on condition of anonymity because the list hadn’t been made public.

None of this means that some of these Wall Street donors aren't genuine progressives. Nor does it mean that certain policies advocated by at least some Democrats -- the expiration of Bush tax cuts for the rich, say -- would not be marginally worse for Wall Street than Republican policies. But let's not lose sight of the fact, highlighted by many of the occupiers I've interviewed, that the tentacles of Wall Street reach deep into both major parties, and that has a profound effect on public policy in this country.