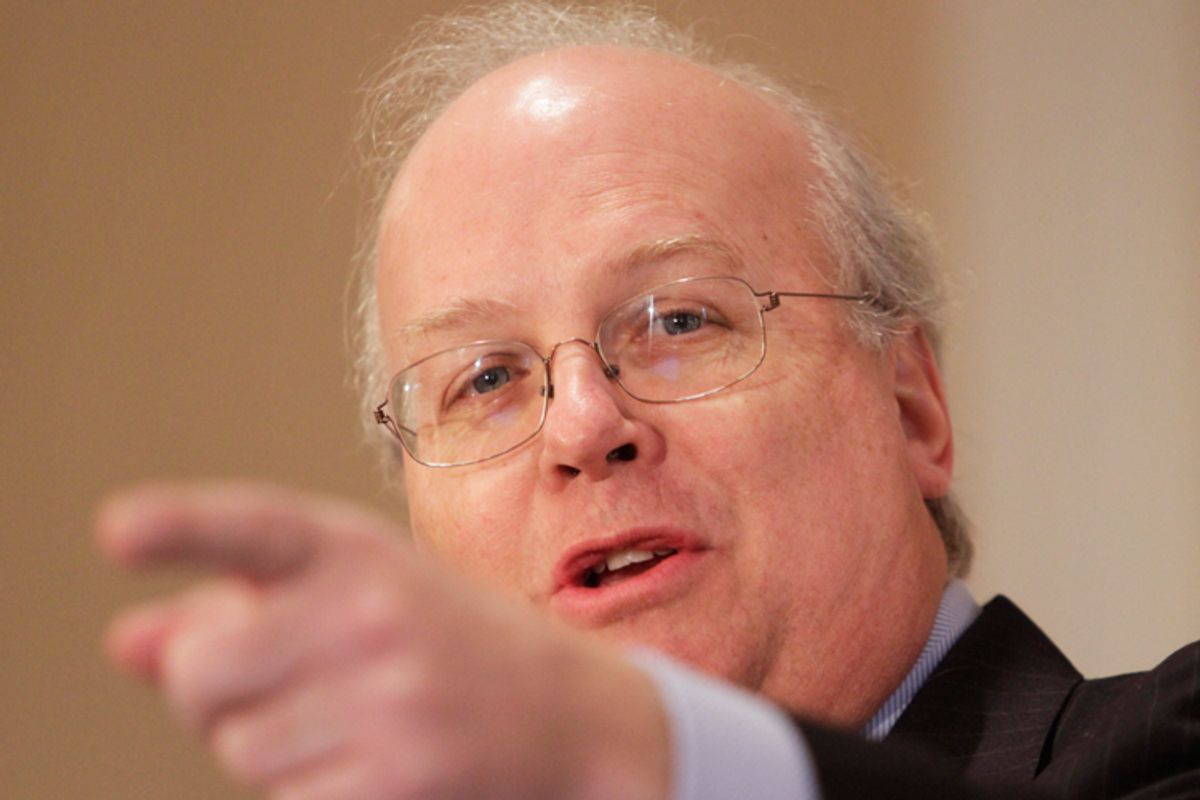 Karl Rove, the Republican Party's master of Atwaterian campaign tricks and primary architect of the updated Southern Strategy, had a bad weekend. He was the victim of an attempted glitter-bombing, and he's apparently fighting with his good friends the Koch brothers.

Rove, in Bloomington, Minn., for the Republican Midwest Leadership Conference (can't believe they held it the same weekend as the Values Voters Summit), was glittered by LGBT activists on Friday, in part because Rove was the one who decided Bush should endorse an anti-gay marriage constitutional amendment in 2004 but mostly because he's just an all-around repulsive person who has made America a meaner, poorer place.

Less embarrassing but probably more aggravating to Rove is the growing rift between him and his wealthy political allies, the Koch brothers, that Politico's Kenneth Vogel reports on today.

Rove is running a shadow-RNC that will flood the airwaves with ads no matter which joker the Republicans actually nominate. In order to do this, he needs a lot of money. The Kochs have a lot of money. But the Kochs and Rove are apparently not going to coordinate their campaigns this year, because they don't get along.

Rove is driven by partisanship and has absolutely no ideology or principles beyond winning elections. He doesn't care what the Republican candidate believes or does, as long as the Republican candidate is electable. The Kochs, driven by principled support of a political philosophy that paints their desire to make the most amount of money with the least amount of oversight as a morally righteous mission instead of your typical plutocratic greed, only want to elect conservative Republicans. In 2010, the two camps coordinated their efforts:

In the months preceding the 2010 elections, operatives working with groups that received millions of dollars in Koch-linked funding participated in twice-a-month coordinating meetings convened by Rove that drew an array of conservative groups looking to boost Republicans. Koch-backed groups included Americans for Prosperity, Americans for Limited Government and the 60 Plus Association.

But the philosophical split made itself apparent when Rove's groups supported John Boehner's debt ceiling compromise, which the Kochs' Americans for Prosperity opposed. Now the Kochs and the Rove groups are developing competing voter databases and they're launching competing campaigns to win Latino support for Republicans.

Of course, they'll probably kiss and make up. If someone as unpalatable to conservatives as Mitt Romney or as potentially toxic to moderates as Rick Perry wins the nomination, Karl Rove will hold his nose and get to work electing him. The Kochs will do the same, knowing they have enough leverage with the party to push any Republican president around.