The real danger from classified leaks 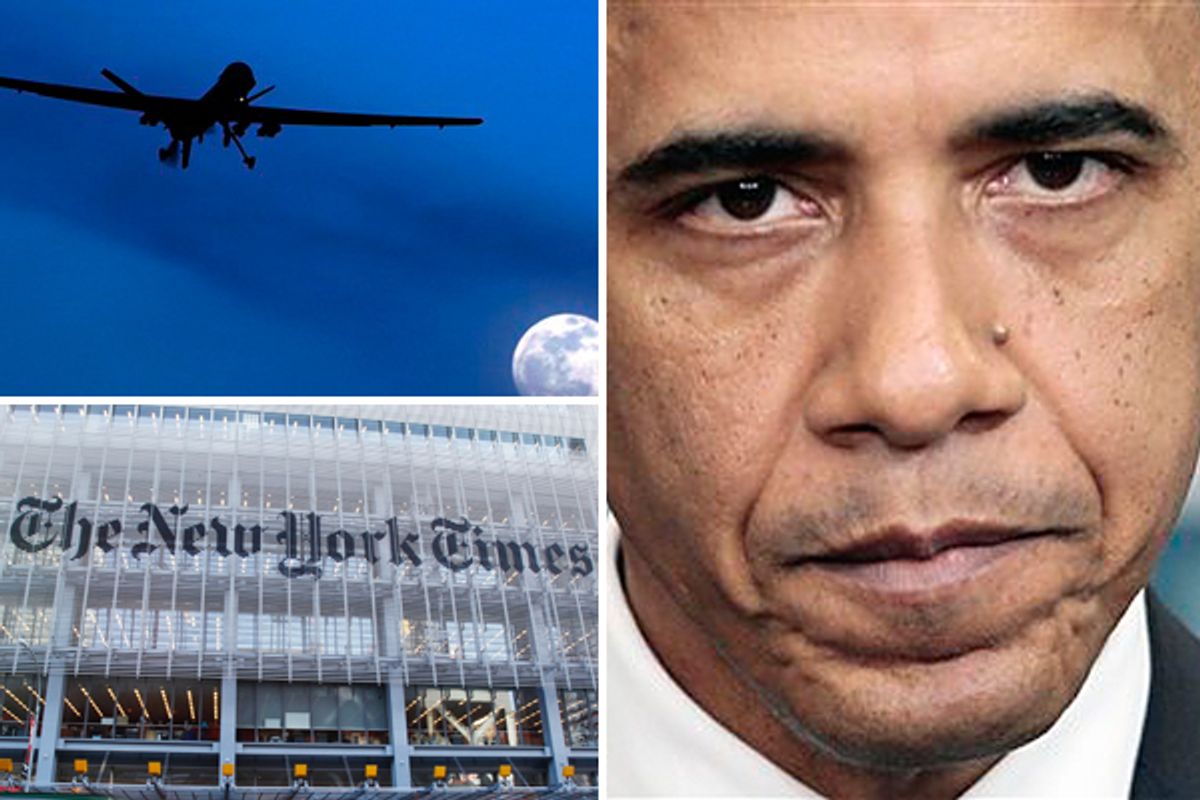 It's worthwhile to expand on one point I made at the end of yesterday's discussion of the leaking by anonymous DOJ officials of selected portions of the Awlaki memo to The New York Times' Charlie Savage. As Marcy Wheeler noted, "What was leaked to Savage is MORE classified than anything Bradley Manning is alleged to have leaked." But as I added last night, given that these anonymous DOJ officials appear to have been on a mission to justify the President’s assassination order as legal and just, it’s probably inadvisable to hold your breath waiting for the criminal leak investigation to begin.

This highlights a vital point: the Obama administration's chronic, self-serving and dangerous game-playing with classified information. The New York Times' Public Editor, Arthur Brisbane, had a good column yesterday on the administration's obsessive secrecy when it comes to assassinations, drones and the killing of U.S. citizens. With regard to the administration's refusal even to account for the legal principles it has embraced governing whom the President can order killed, the Public Editor writes: "it should be intolerable that the question goes unanswered."  But far worse, Brisbane notes that the administration manipulates and exploits its secrecy powers by leaking snippets to the media which glorify President Obama while concealing everything else:

After the drone strike, The Times and others lit up with accounts of the event, and unnamed government officials poured forth with comments. There was no mistaking the administration’s eagerness to put its antiterrorism success on display. . . . The administration invokes secrecy to shield the details while simultaneously deploying a campaign of leaks to build public support. For The Times, and its peers, this dynamic is beyond awkward: it gives the appearance that the government is manipulating them.

The reason that behavior "gives the appearance that the government is manipulating" the media is because that is the reality. If a government employee leaks classified information that exposes wrongdoing on the part of the President or his aides or otherwise embarrasses them, he is prosecuted without mercy; at the same time, the President and his aides constantly leak bits of classified information (which remain classified) in order to benefit the President politically.  Thus, when it suits them, they dole out snippets of information about how the Tough, Strong President killed the Bad Guy with brutal efficiency and bravery -- and how his lawyers said it was permissible -- but all the details necessary to assess the accuracy of those claims and any information which contradicts them remain suppressed, and if anyone exposes them, they face lengthy prison terms.  Brisbane added:

“How can the U.S. government have rules that spell out when it can use lethal force, even against a U.S. citizen, and not let the rest of the citizens know what those rules are?” Jane Mayer, who has written about the drone program for The New Yorker, said in an e-mail to me. “The press ought to be able to get access to and describe the legal opinions that govern this program. As we saw with the torture memos, which eventually leaked, legal reasoning can be extraordinarily revealing, and important" . . . .

The public has a right to know, and assess, the legal rationale for these extraordinary and highly visible state killings. The public should have documented details concerning civilian casualties of the drone strikes.

But while The Most Transparent Adminstration Ever refuses to provide even this basic information about the Awlaki killing, it manipulates its secrecy powers to ensure that the only information that is known is information that can be used to venerate the Leader. The same thing happened with the bin Laden killing: the Obama administration has resisted efforts to declassify and disclose videos, documents and photographs regarding the raid that killed him -- requests motivated by the administration's multiple inconsistent  and ultimately false statements about what took place and lingering questions about what happened -- but then oh-so-mysteriously showed little interest (i.e., none) in discovering and punishing those who orally fed The New Yorker supposed details of the raid that produced an uncritical hagiography of those, including the President, responsible for the bin Laden killing.

This game-playing with secrecy powers has been going on for quite some time. In the wake of the 2005 disclosure that the Bush adminstration was spying on Americans without warrants, we suddenly learned from an anonymous government leaker that the Bush administration had a super-top-secret program in place to detect unusual radioactivity in the nation's mosques and the monitoring was even conducted without warrants  -- a leak which helpfully suggested, at the height of the NSA controversy, that Muslims in this country may be trying to radiate your children but that the administration is using super-sophisticated and stealth means even if they are a little bit illegal (just like warrantless eavesdropping) to protect and save us all. While the Bush administration was obsessed with punishing those responsible for the NSA leak -- to the point of publicly threatening The New York Times with criminal prosecution -- they, needless to say, displayed no interest in learning the identity of those who leaked their heroic efforts to detect radiation at mosques.

The problem of "overclassification" receives some attention (though not nearly the level of media condemnation as what is heaped on those who engage in unauthorized leaks (at least the leaks the Government dislikes)).  But the problem is much worse than mere execssive secrecy. Anyone who purports concern over the harmful leaking of classified information should look first to the Obama administration, which uses secrecy powers as a manipulative tool to propagandize the citizenry: trumpeting information that makes the leader and his government look good while  suppressing anything with the force of criminal law that does the opposite. Using secrecy powers to propagandize the citizenry this way is infinitely more harmful than any of the leaks the Obama administration has so aggressively prosecuted.

Speaking of secrecy obssession: U.S. citizen Jacob Appelbaum was identified as a WikiLeaks spokesman last year. Since then, despite being charged with (let alone convicted of) no crime whatsoever, he has -- all without any search warrants -- had his laptop, cellphone and camera seized at the airport; been repeatedly subjected to detention every time he re-enters the country; had people whose only crime was to appear in his telephone subjected to similar harrassment; had orders issued for information showing his Twitter activities and communications; and now, as The Wall Street Journal reports today, has had a secret Order served by the DOJ on Google and another internet provider for an array of information relating to his email activity (including the list of those with whom he has corresponded by email over the last two years: I'm happy to say I'm one of those correspondents).

The Fourth Amendment to the Constitution guarantees "the right of the people to be secure in their persons, houses, papers, and effects, against unreasonable searches and seizures" and that "no Warrants shall issue, but upon probable cause." In light of everything the U.S. Government has been able to seize regarding Appelbaum without a single search warrant -- laptops, cellphones, cameras, memory sticks, Twitter activity, electronic goods of his friends, interrogation via forcible detention, and now lists of his email correspondents and other information showing his email activity -- is there any rational conclusion other than to view that Amendment as an absurd joke?