Will Perry regain his footing, or marginalize himself for good? 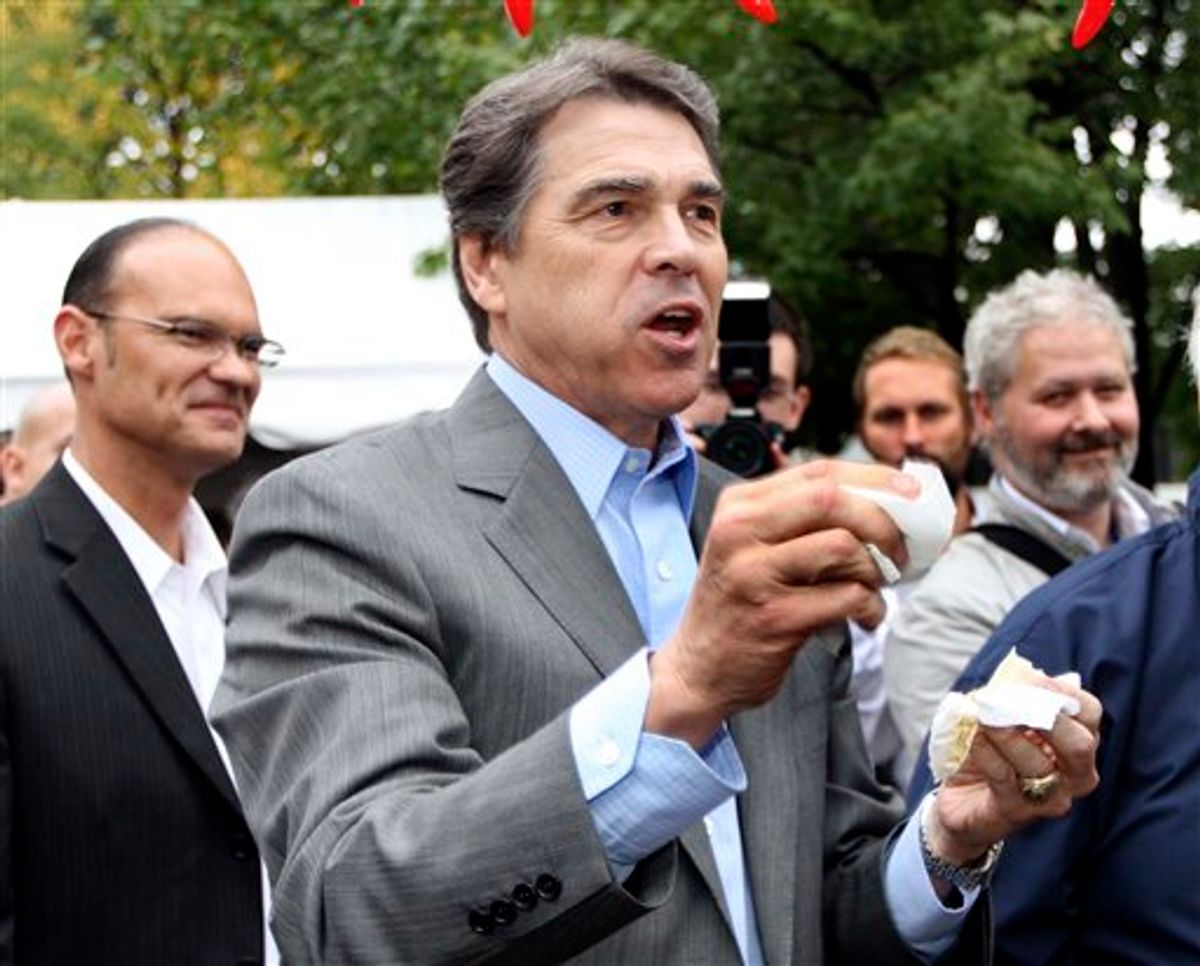 Another weekend, another painful example of Rick Perry's failure to meet his potential as a Republican presidential candidate.

This time the venue was the Values Voter Summit, the annual gathering of social conservative activists that wrapped up Saturday with a GOP straw poll. It was precisely the sort of event that Perry was supposed to dominate when he entered the race, a gathering of true believers yearning for a pure and credible alternative to Mitt Romney and the various B-list options who'd traded stints in the spotlight before Perry's emergence. Like all of the other candidates (except Jon Huntsman), Perry showed up and delivered a speech, pitching himself as a stalwart culture warrior and taking clear, if indirect, swipes at Romney's past social liberalism. But when the votes were tallied, he finished in a tie for fourth place, with just eight percent.

Granted, the results were somewhat distorted by Ron Paul's unusually dedicated army of supporters, who crashed the conference on Saturday and made him the official straw poll winner, with 37 percent of the vote. (This is a strategy that has helped the Texas congressman post a string of deceptively impressive straw poll performances.) After Paul, Herman Cain was next with 23 percent, followed by Rick Santorum at 16 percent, and Perry and Bachmann and eight percent. Romney was next with just four percent, a showing that confirms just how strong the GOP base's desire for an alternative to him is, especially when it comes to Christian conservatives.

That's what makes Perry's poor showing so remarkable. The combined 55 percent that he, Bachmann, Santorum and Cain received was, roughly speaking, supposed to represent his base as a candidate. And in his first few weeks in the race, he seemed on pace to unify the right, zooming to commanding leads in national and early state polling and rendering Bachmann and the rest mere asterisks. Cain even admitted recently that he had considered dropping out of the race, so suffocating was the effect of Perry's entrance on the other non-Romney candidates. The Values Voter conference is just the latest indication of how far Perry has fallen since then -- and of the very real risk that he may be reduced to just one of several candidates vying for a piece of the conservative vote, not the great unifier of the right he was supposed to be.

Five national polls in the last two weeks have shown Perry losing his lead to Romney and plummeting to as low as 12 percent. (He was in the mid-30s just a month ago.) The average of the most recent data now has Cain, who was barely registering in surveys a month ago, edging out Perry for second place. In New Hampshire, he's plunged to just four percent, and a poll in Florida released last week showed him fading to fifth place, with just nine percent. Florida is also where Perry suffered a humiliating straw poll defeat two weekends ago, just after his widely-panned Orlando debate performance, losing by 22 points to Cain even after the Perry campaign aggressively targeted the event. And while we're still waiting for fresh data from Iowa, where a credible poll hasn't been conducted since mid-September, Perry apparently found himself on the defensive there this weekend, with voters grilling him at several different events over his support for granting in-state tuition rates to the children of illegal immigrants -- a position that he has struggled to explain to a skeptical GOP electorate, a key factor in his decline.

Perry's candidacy seems to be at a pivot point: Will he bounce back, assuage all of the concerns he's raised among conservative leaders and activists and reassert himself as the right's chief alternative to Romney? Or will things go from bad to worse, with Perry permanently marginalized as just one of several Romney alternatives? The week we are now starting, which will feature the first debate since his Orlando debacle and a major Perry speech on the economy,  may be crucial in determining which direction he goes.

Certainly the opportunity for a comeback is there. This GOP race has been marked by unusual, even absurd, volatility. Every candidate except Santorum has had at least one burst of encouraging polling news, so there's no reason that Perry can't go from an early fall meltdown to a surge back to the top. After all, John McCain pulled something similar off last time around, returning from the dead in early December and walking off with the nomination. Plus, for all of his recent woes, Perry did manage to raise $17 million in the third quarter, money that makes a resurgence that much more plausible. (In fact, the New York Times reported late Sunday night that Perry is preparing to invest in television ads that will emphasize "Romney’s lack of consistency on the issues of most importance to conservatives.")

That's why this week's debate, set for Tuesday night, is so significant. Deflect immigration questions and attack Romney's conservative credentials with dexterity, and the same conservative opinion-shapers who have been turning on Perry might change their minds, leading to a broader reassessment by the rank-and-file masses who have been deserting him in polls. According to the Times, Perry's team has been pushing him to get more sleep at night in an effort to guard against a repeat of Orlando.

If he does turn in another dreadful performance, the doubts about Perry could reach critical mass. And it could be a sign that he's  simply incapable of turning in a confidence-inspiring performance. If this ends up being the case, all of that money might not be able to save him. Here the example of another Texas White House candidate comes to mind: Phil Gramm, who entered the 1996 GOP race boasting that he had "the most reliable friend you can have in American politics, and that is ready money." Gramm raised $4 million at one event on the eve of his campaign announcement, and raised eyebrows by nearly equaling front-runner Bob Dole's tally through much of 1995. But Gramm still collapsed and didn't even make it to New Hampshire.

If Perry's struggles endure, the big winner -- not surprisingly -- figures to be Romney, who has failed to attract many (or any) of the Republicans who have abandoned Perry in the last few weeks. Instead, those Republicans have flocked to Cain, and to a lesser extent Gingrich. Bachmann and Santorum continue to attract a few points each in polls, too. If conservative loyalties are divided, Romney may (like McCain) be able to win the key early contests with less than 40 percent of the vote, at which point the base could reluctantly surrender to his inevitability. That's probably Romney's best path to the nomination. And if this week goes poorly for Perry, it will be an even more plausible one.