Can OWS be turned into a Democratic Party movement?

The pro-Obama camp is trying to co-opt the OWS movement. But it's not going to happen 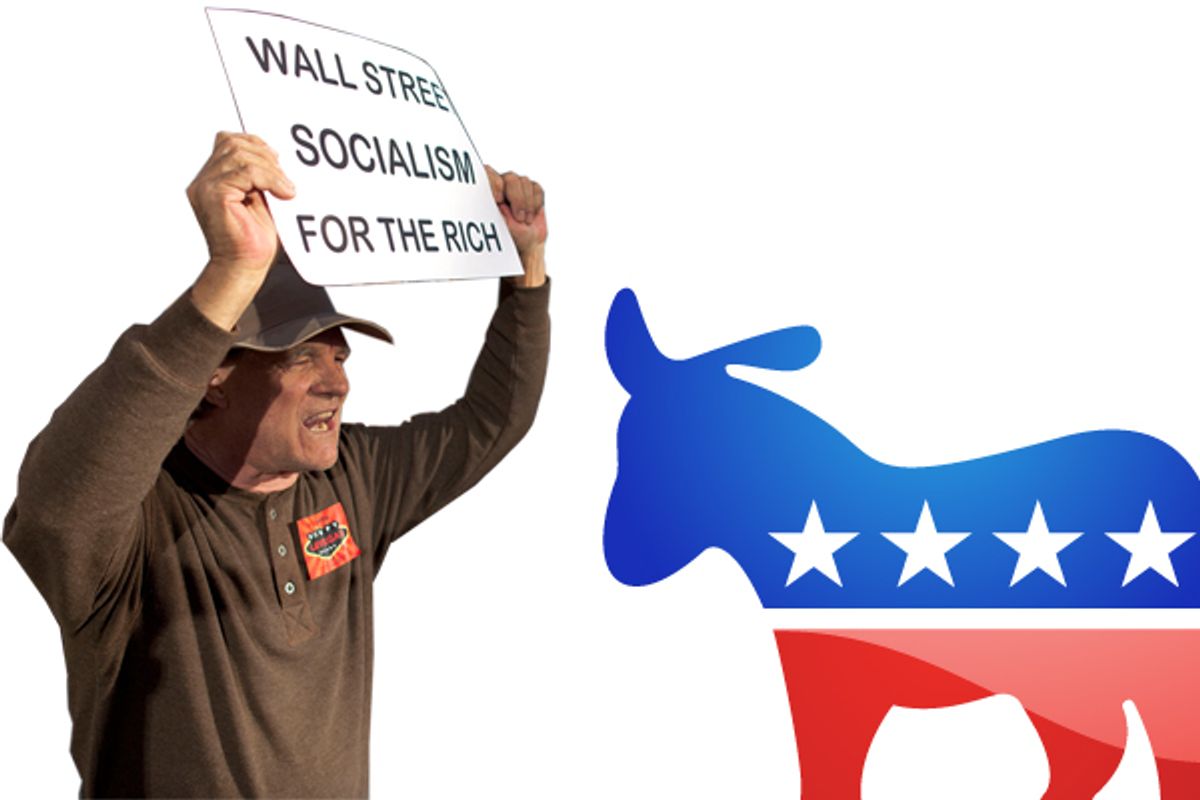 When I first wrote in defense of the Occupy Wall Street protests a couple of weeks ago, I suggested that much of the scorn then being expressed by many progressives was "grounded in the belief that the only valid form of political activism is support for Democratic Party candidates." Since then, even the most establishment Democrats have fundamentally changed how they talk about the protests -- from condescension and hostility to respect and even support -- and The New York Times today makes clear one significant factor accounting for this change:

Leading Democratic figures, including party fund-raisers and a top ally of President Obama, are embracing the spread of the anti-Wall Street protests in a clear sign that members of the Democratic establishment see the movement as a way to align disenchanted Americans with their party.

The Democratic Congressional Campaign Committee, the party’s powerful House fund-raising arm, is circulating a petition seeking 100,000 party supporters to declare that “I stand with the Occupy Wall Street protests.”

The Center for American Progress, a liberal organization run by John D. Podesta, who helped lead Mr. Obama’s 2008 transition, credits the protests with tapping into pent-up anger over a political system that it says rewards the rich over the working class — a populist theme now being emphasized by the White House and the party. The center has encouraged and sought to help coordinate protests in different cities.

Judd Legum, a spokesman for the center, said that its direct contacts with the protests have been limited, but that “we’ve definitely been publicizing it and supporting it.”

He said Democrats are already looking for ways to mobilize protesters in get-out-the-vote drives for 2012.

Politico similarly noted today that "the White House wants to make it clear that President Barack Obama is on the same side as the Occupy Wall Street protesters."

Can that scheme work? Can the Occupy Wall Street protests be transformed into a get-out-the-vote organ of Obama 2012 and the Democratic Party? To determine if this is likely, let's review a few relevant facts.

In March, 2008, The Los Angeles Times published an article with the headline "Democrats are darlings of Wall St", which reported that both Obama and Clinton "are benefiting handsomely from Wall Street donations, easily surpassing Republican John McCain in campaign contributions."  In June, 2008, Reuters published an article entitled "Wall Street puts its money behind Obama"; it detailed that Obama had almost twice as much in contributions from "the securities and investment industry" and that "Democrats garnered 57 percent of the contributions from" that industry. When the financial collapse exploded, then-candidate Obama became an outspoken supporter of the Wall Street bailout.

After Obama's election, the Democratic Party controlled the White House, the Senate and the House for the first two years, and the White House and Senate for the ten months after that. During this time, unemployment and home foreclosures were painfully high, while Wall Street and corporate profits exploded, along with income inequality. In July, 2009, The New York Times dubbed JPMorgan Chase CEO Jamie Dimon "Obama's favorite banker" because of his close relationship with, and heavy influence on, leading Democrats, including the President. In February, 2010, President Obama defended Dimon's $17 million bonus and the $9 million bonus to Goldman CEO Lloyd Blankfein -- both of whose firms received substantial taxpayer bailouts -- as fair and reasonable.

The key Senate fundraiser for the Party is Chuck Schumer, whom the New York Times profiled -- in an article headlined "Champion of Wall Street Reaps the Benefits" -- as someone who repeatedly supported "measures now blamed for contributing to the financial crisis" and who "took other steps to protect industry players from government oversight and tougher rules" and thus "became a magnet for campaign donations from wealthy industry executives, including Jamie Dimon, now the chief executive of JPMorgan Chase; John J. Mack, the chief executive at Morgan Stanley; and Charles O. Prince III, the former chief executive of Citigroup." That servitude to Wall Street is what consolidated Schumer's power in the Party:

As a result, [Schumer] has collected over his career more in campaign contributions from the securities and investment industry than any of his peers in Congress, with the exception of Senator John F. Kerry of Massachusetts . . . In the last two-year election cycle, he helped raise more than $120 million for the Democrats’ Senate campaign committee, drawing nearly four times as much money from Wall Street as the National Republican Senatorial Committee. Donors often mention his “pro-business message” and record of addressing their concerns.

When Obama chose him, Geithner had just participated in a secret meeting along with Bush Treasury Secretary Hank Paulson and Goldman Sachs CEO Lloyd Blankfein, at which it was decided that a bankrupt AIG would be saved and then -- with taxpayer money -- would pay Goldman every penny owed to it.  Summers, in February, 2009, defended gaudy AIG bonuses as compelled by "the rule of law" even after the administration forced auto union workers to take sizable cuts in their contractually guaranteed pay.

As his Chief of Staff at Treasury, Geithner chose Mark Patterson, the former top lobbyist for Goldman, Sachs. Goldman replaced Patterson with Michael Paese, who at the time was the top staffer to Democratic Rep. Barney Frank in his capacity as Chairman of the House Financial Services Committee, which regulates Wall Street. Obama's choice to oversee America's futures markets was Gary Gensler, a former Goldman Sachs executive who, during the 1990s, was known for his shockingly lax enforcement of regulations governing derivative products. Obama re-appointed Bush's Fed Chair Ben Bernanke, and named CEO of GE Jeffery Immelt to head his panel of jobs advisers, along with several other job-cutting corporate executives.

When Rahm Emanuel -- who had made $16 million in three years as an investment banker after leaving the Clinton White House -- left as Obama's Chief of Staff to run for Mayor of Chicago, Obama chose as his replacement Bill Daley, who at the time was serving as JP Morgan’s Midwest Chairman and a director of Boeing. Shortly after Obama's star director of Office of Management and Budget, Peter Orszag, left the administration, he became a top executive at Citigroup. The DCCC, recently headed by Emanuel and now feigning support for the protests, is characterized by little other than a strategy of supporting corporatist, Wall-Street-revering "Blue Dog" Democrats as a way of consolidating power.

One of the most significant aspects of the Obama administration is the lack of criminal prosecutions for leading Wall Street executives for the 2008 financial crisis. Obama recently opined -- even while there are supposedly ongoing DOJ investigations -- that Wall Street's corruption was, in general, not illegal. The New York Times recently reported that top Obama officials are heavily pressuring New York State Attorney General Eric Schneiderman to join a woefully inadequate settlement agreement that would end all investigations and litigations against Wall Street firms for pervasive mortgage fraud.

Given these facts, does the Center for American Progress really believe that the protest movement named OccupyWallStreet was begun -- and that people are being arrested and pepper-sprayed and ready to endure harsh winters and marching to Jamie Dimon's house -- in order to devote themselves to ensuring that these people remain in power? Does CAP and the DCCC really believe that most of the protesters are motivated -- or can be motivated -- to turn themselves into a get-out-the-vote machine for Obama's re-election and the empowerment of Chuck Schumer and the Democratic Party? Obviously, when the GOP nominates some crony capitalist like Rick Perry or eager Wall Street servant like Mitt Romney, few if any of the protesters will or should support them, nor can it be denied that the GOP in its current incarnation is steadfastly devoted to a pro-Wall-Street, corporatist agenda. But it also seems to me quite delusional to think that you're going to exploit this protest as a way "to mobilize protesters in get-out-the-vote drives for 2012" on behalf of the Democratic Party that I just documented.

Presumably, people who are out protesting and getting arrested are politically astute enough to be aware of some, probably most, of these facts. A rejuvenated outburst of "populist rhetoric" from Obama -- a re-reading of the 2008 Change script -- just as election season is heating up and Obama again needs progressive enthusiasm to remain in power seems quite unlikely to make people forget all of this.

As Robert Reich recently pointed out, OWS and the Democratic Party are not exactly natural allies given that "Obama has been extraordinarily solicitous of Wall Street and big business" and that "a big share of both parties’ campaign funds comes from the Street and corporate board rooms." As Naomi Klein explained after speaking to the protesters, the reason they are out on the street rather than working for the DNC or OFA is precisely because they concluded that electoral politics or working for either party will not address the issues motivating them; part of what they're protesting is the Democratic Party. For an FDL Book Salon discussion this weekend, I reviewed Lawrence Lessig's excellent new book on our corrupted political system, Republic: Lost, and he documents exactly why he transformed from an enthusiastic supporter of his long-time friend and colleague Barack Obama in 2008 into a harsh critic of both parties: because the political system itself has been subverted by oligarchical control. As he put it in his book: : "Democracy on this account seems a show or a rule; power rests elsewhere. . . . the charade is a signal: spend your time elsewhere, because this game is not for real."

So best of luck to CAP and the DCCC in their efforts to exploit these protests into some re-branded Obama 2012 crusade and to convince the protesters to engage in civil disobedience and get arrested all to make themselves the 2012 street version of OFA. I think they're going to need it.

UPDATE: Here are the top recipients of campaign donations from the "securities and investment" industry from 1989 through 2010 (h/t muddy thinking):

Would it not be a bit odd for a protest movement to "Occupy Wall Street" while simultaneously devoting itself to keeping Wall Street's most lavishly funded politician in power?