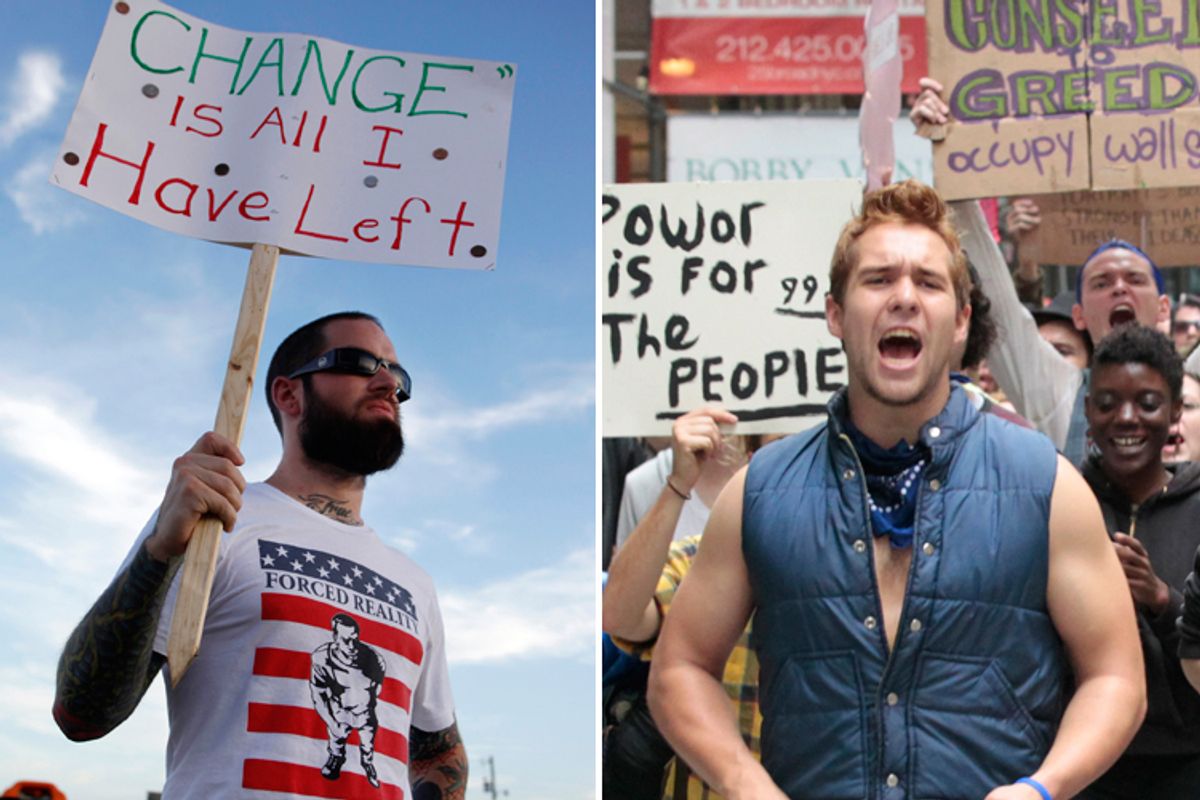 Can the Occupy Wall Street movement do for the Democrats what the Tea Party has done for the Republicans? Will a spontaneous grass-roots uprising against the rich neutralize the manipulated “Astroturf” Tea Party movement’s assault on big government, assure a second term for Barack Obama and lead to the new New Deal that progressives have been waiting for?

Alas, probably not. Ever since Richard Nixon won his reelection victory in 1972 by appealing to many of the discontented populists attracted to George Wallace, the Republican Party, formerly a party of big city boardroom types and small-town Rotarians, has been based at least in its rhetoric on right-wing populism. The Tea Party movement is merely an extreme exaggeration of the mainstream GOP.

But the Democrats since George McGovern captured the party’s presidential nomination in the same fateful year of 1972 have been the opposite of a left-wing populist party. Thus while right-wing populism reinforces the existing Republican story about America, any genuine left-wing populism would challenge the basic constituencies and values of the McGovern-to-Obama Democrats. There are six reasons in particular why Democrats are unlikely to benefit as much from populism as Republicans.

Reason No. 1: The Democrats depend on Wall Street for campaign donations. Both national parties are captured to a large degree by financial industry contributors. But this is not as much of a problem for the Republicans as for the Democrats. Since Nixon, the Republicans have successfully channeled anger away from Big Money to Big Government. They have done so by manipulating the classic populist paradigm of producers vs. parasites. They have treated private sector workers, business owners and investors as allies in a common struggle of producers against parasitic public sector employees and poor people dependent on welfare.

To counteract this powerful neo-Jacksonian narrative, the Democrats would have to be equally pungent in their criticism of plutocratic bankers and overpaid CEOs. But how can President Obama and Democrats in Congress wave pitchforks at Wall Street while engaging in Wall Street fundraisers for their 2012 campaigns?

Barack Obama, who went without federal matching funds in 2008 so that he would be free to shovel in unlimited amounts of big money, is a particularly unlikely critic of Wall Street. In 2008, if professors at universities are not counted, the top institutional donors to the Obama campaign were Goldman Sachs, Microsoft, JP Morgan Chase, Citigroup and Time Warner.

Obama’s 2008 campaign looks less like William Jennings Bryan’s outsider challenge than like William McKinley’s successful fundraising in 1896 from the banking and corporate elite.

Reason No. 2: The Democrats rely increasingly for votes on elite professionals. Having lost the white working class to the Republicans decades ago, Democrats have had some success in winning over upscale white professionals with liberal attitudes on social issues and the environment. But identification with the professional-class minority poses as many problems for would-be Democratic populists as does the party’s reliance on the financial sector.

The majority of Americans do not go to college and are not likely to be inspired by the elite progressive vision of a society where anyone with high test scores can study until his or her 30s, earn an expensive credential, and then get an interesting and fulfilling office job. The populist ideal is the horny-handed son of toil who can fix a car engine, not the meritocratic nerd who could flourish in a lightning round on "Jeopardy."

Even worse, to avoid alienating their professional-class supporters the Democrats are forced to come up with absurdly restrictive definitions of “the rich” or “the wealthy” that will include billionaire hedge fund types but exclude the toilers who earn a quarter of a million dollars a year and can afford vacation homes, maids and private schools for their children. According to the Democratic version of populism, corporate lawyers who make less than $250,000 a year, along with janitors who make $15,000 a year and rely on food stamps, are both members of the suffering proletariat exploited by the rich. This explains the emphasis on the gains in income and wealth of the top 1 percent, rather than, say, the top 10 percent or 20 percent. And it explains the widespread opposition among Democrats to lifting the cap on wage income taxed by the Social Security payroll tax above the present limit of $106,800. It’s one thing for billionaires and millionaires to pay as much as their secretaries in taxes, and quite another for Democratic lawyers, consultants and professors with lower six-figure salaries to pay the same share of income in payroll taxes as their secretaries. A genuine populism of the left would go after America’s pampered and privileged professionals, not just billionaires.

Reason No. 3: Public Sector Unions. The left-populism of the New Deal era drew on both organized farmers’ movements and organized labor. The right’s counterrevolution against organized labor since the 1980s has all but annihilated unions in the private sector.

Can a populism of the left be based on the public sector workers who, with professionals and minorities, are part of the Democratic Party base? In theory, it could. The progressive view, set forth recently with admirable clarity and passion by Elizabeth Warren, is that the U.S. is a mixed economy, in which the success of the private and nonprofit sectors depends on the success of the public sector. And front-line public servants like police officers, first responders and teachers continue to command the respect of their neighbors.

Reason No. 4: Identity Politics. The essence of populism of the left, right or center is the defense of the common good of the demos, the people, against unjust privileges sought by special interests -- that is, populations who make up less than the whole. Populism only works if there is a clearly identifiable “people.”

In most nation-states “the people” is identified, in the popular mind if not officially, with the dominant ethnocultural population in the country—the French in France, the Czechs in the Czech Republic. For this reason, populism is easily captured by right-wing movements for whom the “true people” are members of the ethnic or racial majority and for whom national minorities are threatening outsiders.

But more inclusive versions of populism are possible. In the U.S. the idea of “the melting pot” held that Americans of many different ancestries, by cultural interchange and intermarriage, amalgamate over time to produce a new nationality that is distinct from ancestral subcultures. In its mid-century formulation, the melting pot ideal in practice was limited to the amalgamation of Anglo-Americans with immigrants from Ireland and continental Europe to form a kind of generic white “people.” With the Civil Rights Revolution, the white-ethnic melting pot could have been redefined as a larger, more inclusive trans-racial melting pot.

Instead, however, the American center-left from the 1970s onward rejected the idea of the melting pot, in favor of identity politics, which seeks the permanent preservation of ethno-racial identities as fixed elements of a multicultural America. These official ethno-racial identities are those of America’s Soviet-style bureaucratic racialism: non-Hispanic white, Hispanic (may be of any race), African-American, Asian and Pacific Islander, and Native American. A genuine left-wing populism in the last generation would have mocked these bureaucratic categories and celebrated fluidity and hybridization across racial lines. Instead, the power of identity politics is shown by the fact that Barack Obama, the son of a white mother and a black father, is identified, and identifies himself, as “black” rather than “mixed race.”

Reason No. 5: Progressives and Double Standards. The definition of America as a collection of peoples, rather than as a single, diverse people, creates another problem for would-be Democratic populists — their endorsement of race-based double standards. One consists of race-based affirmative action, which, in spite of liberal attempts to argue otherwise, means nothing if it does not mean sometimes favoring blacks and Latinos with lower tests scores in college admissions at the expense of whites and Asians with higher test scores.

“Equal rights for all and special privileges for none” was the motto of Jacksonian populism. Racial preference policies created a genuine, grass-roots populist movement among so-called non-Hispanic whites for their repeal, which succeeded in many states. Had there been genuine populists of the left in America, they would have spent the last 30 years fighting for living wages and universal social insurance, which benefit Americans of all races, rather than fighting losing battles to defend double standards in college admissions and small business loans for some groups at the expense of others.

Having largely lost the ill-conceived battle in defense of racial preferences, many progressive activists have found a new kind of race-based double standard they can embrace: celebrating illegal immigration as the equivalent of the civil rights movement, as though a Guatemalan janitor or Irish bartender who sneaks into the U.S., buys a forged Social Security card and repeatedly deceives federal, state and local governments, at the expense of other Guatemalan or Irish would-be immigrants who patiently wait in line, is somehow the equivalent of Rosa Parks. A case can be made for providing citizenship to many of today’s illegal immigrants, if only to prevent the existence on American soil of a permanent class of metics or workers without rights. But what kind of populism idealizes foreigners who break immigration laws made by the elected representatives of the people?

Reason No. 6: The Vilification of Working-Class Lifestyles by the Cultural Left. Last but not least, Democrats are not likely to be able to compete on populist terrain with the right as long as a substantial portion of the progressive intelligentsia is identified with scorn toward the lifestyles of people in the suburbs, where the majority of working-class blacks and Latinos as well as whites are now found. Since the days of Nixon, right-wing populism has derived much of its appeal from attacks on “limousine liberals” — more recently, “latte liberals” — who, according to conservatives, look down their noses at the religious beliefs and folkways of the American working class. Unfortunately, much of the progressive intelligentsia seems determined to live up to the right’s stereotype, by demonizing the elements of modern American working-class life, from SUVs and low-price exurban box stores to the kinds of cuisine that upscale foodies frown upon.

It is all too easy for conservative populists to portray progressive thinkers and pundits who denounce suburban single-family homes, the reliance of most Americans on automobiles for commuting and shopping, church attendance and, in some parts of the country, traditions of hunting as out-of-touch elitists at war with the Main Street way of life. And what could be more anti-populist than the enthusiastic embrace by much of the center-left of Cass Sunstein’s notion of public policy based on “nudging,” in which elite liberal technocrats will use taxes and other devices to manipulate irrational working-class yokels into doing the right thing against their bad instincts?

Today’s plutocratic America could use a populist movement of the center-left, comparable to the coalition of workers and farmers and radicalized professionals who provided the backbone of the New Deal Democrats. But the prospects are remote that any genuine populism of the left will come from a party funded by Wall Street that finds its core constituencies among upper-middle-class professionals and public sector workers and reaches out to minorities on the basis of narrowly tailored patronage policies targeting particular groups. A Democratic Party that channeled popular anger for constructive liberal purposes would look and sound very different from the Democratic Party of today.