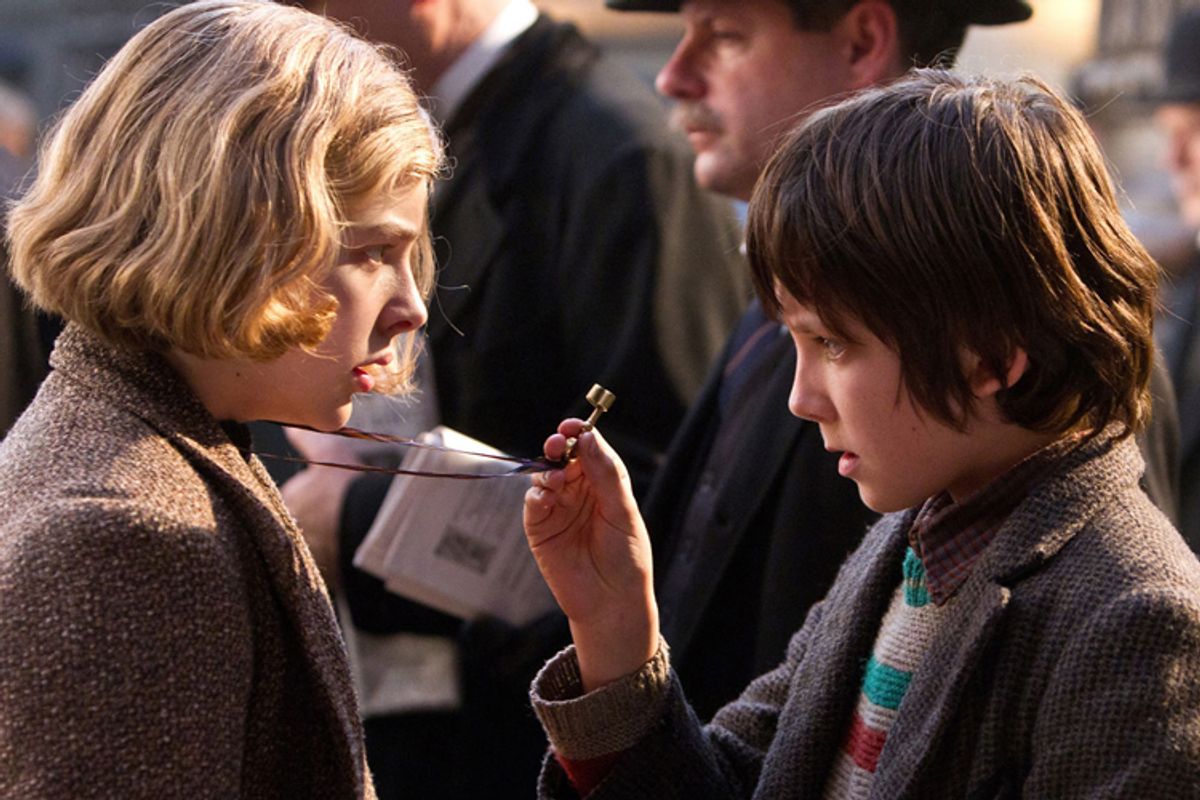 I have seen the future of 3-D moviemaking, and it belongs to Martin Scorsese, of all people. If you were bewildered by the news that Scorsese was apparently blundering into Steven Spielberg's territory and making a 3-D family spectacle for the holidays, wonder no longer. Indeed, I am tempted to guess that Scorsese's "Hugo," which screened as a work in progress on Monday night at the New York Film Festival, is the best movie that anyone will make in the current 3-D wave, which shows distinct signs of ebbing.

"Hugo" definitely isn't finished. The print Scorsese introduced on Monday before a packed house in Lincoln Center's Avery Fisher Hall included some crude, temporary digital effects footage in a couple of scenes, one of them a crucial action sequence near the climax of the film. A working version of Howard Shore's score was played on the soundtrack, without full orchestration or instrumentation. The movie hadn't been color-corrected, and lacked a full credit sequence.

Members of the press were asked not to review the film before seeing the final cut, which may of course also differ in other ways. (If I had to guess, I would say that Scorsese might decide to cut a few minutes of running time.) That's only fair, although I can promise you that all of us who saw "Hugo" last night are virtually bursting with private analyses and questions and debating points. It looks to be a movie with tremendous box-office and awards-season potential, and also a deeply personal film that's artistically uneven. It will also present an intriguing marketing challenge. A jocular debate broke out on Twitter last night over the burning question of whether Johnny Depp (a co-producer) plays a cameo role as legendary jazz guitarist Django Reinhardt. I won't even answer that question completely -- no, sort of -- and the rest of those discussions will have to wait until next month.

I don't think Scorsese or Paramount Pictures will object to the following teaser: Based on what I've seen so far, "Hugo" is an absolutely magical film, one that creates a fantastical, storybook vision of Paris, circa 1930, and moves around in it with fluid cinematic ease. Scorsese does not use 3-D as a stunt or a value-added effect, but as a storytelling tool, a method of infusing his tale with humor, humanity and often breathtaking depth. If you already know Brian Selznick's Caldecott Medal children's book "The Invention of Hugo Cabret," you'll understand exactly why it appealed to Scorsese so much (the adaptation is by veteran screenwriter John Logan). If you don't, I won't spoil it except to say that the director's passion for history, and in particular the history of early cinema, has never been put to better use. It's premature for me to declare that this is Scorsese's best work in 10 to 15 years -- and easily among the top five of his career -- but I strongly suspect that's the case.

Given Scorsese's superlative command of the technical aspects of cinema, and his career-long commitment to movies as full-on sensual spectacles (although always, or almost always, built around human characters and stories), it shouldn't really surprise us that he saw potential in 3-D that other filmmakers failed to grasp. Up until now, almost the only post-"Avatar" film made in 3-D that displayed any verve or imagination whatsoever was the summer 2010 animated hit "Despicable Me," which at least was good fun. (I enjoyed "Cars 2" quite a bit more than most critics, but you really didn't miss much of the production design -- and saved several bucks -- if you watched it in 2-D projection.) Too much of the time, we're dealing with post-production 3-D conversion, which either looks like absolute crap ("The Last Airbender") or added nothing but a mild headache to the viewing experience (the two-part "Harry Potter" conclusion).

This is a movie that goes inside the machinery of a clock high above a Parisian train station, where the eponymous orphan (English youngster Asa Butterfield) makes his home, and also, so to speak, inside its own dream-factory machinery. Butterfield and Chloë Grace Moretz, as a better-off orphan who takes pity on Hugo, are the evident protagonists of this Dickensian-gone-Gallic fable. But the film's real star may be Ben Kingsley, playing an obscure toymaker named Georges who literally holds the story's secrets, as well as the prehistory of the craft and art to which Scorsese has devoted his life.

There are other delights too numerous to mention, including supporting roles for Emily Mortimer, Jude Law, Richard Griffiths and Christopher Lee, along with Sacha Baron Cohen -- and his character's Doberman pinscher -- used as the movie's most memorable 3-D effects. Scorsese has aimed for nothing less here than a memorable holiday classic, an exciting melodrama that will play very differently for child and adult viewers and will reward repeat viewings for many years to come. Has he gotten there? We'll soon see.