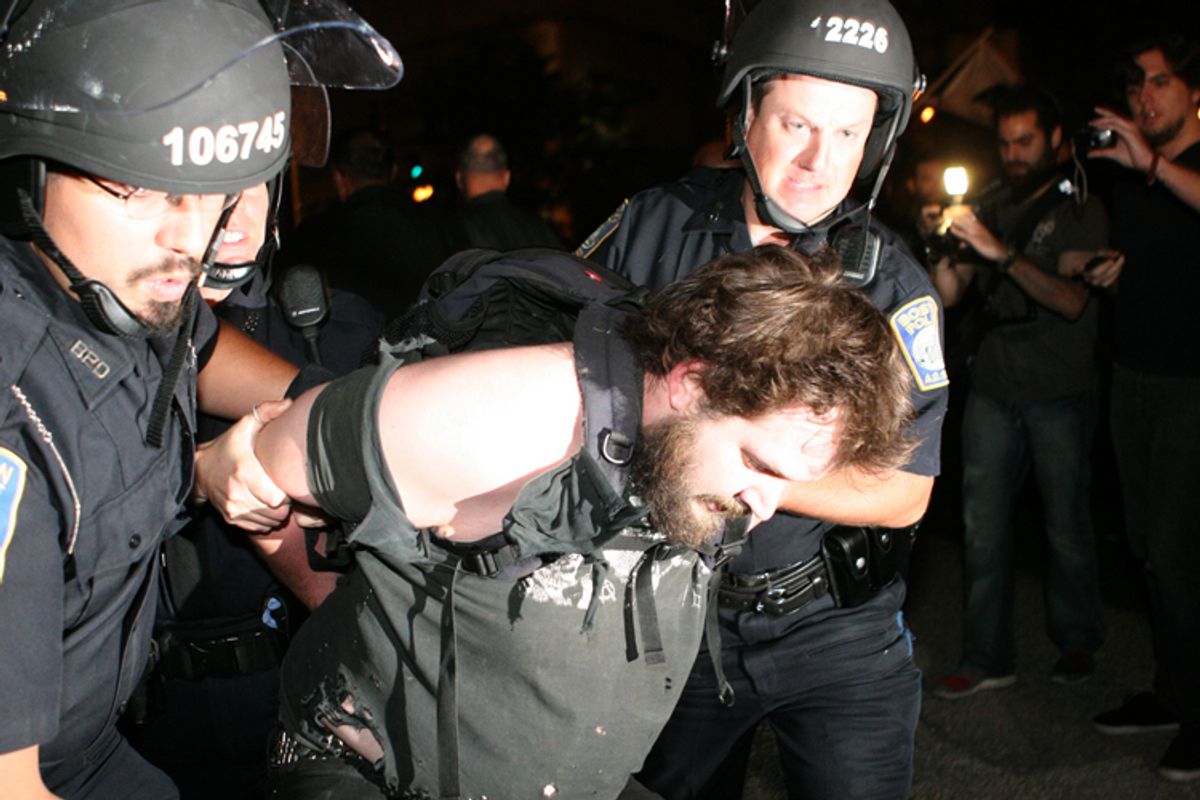 BOSTON—As the last of 141 anti-corporate protestors underwent arraignment at a Boston district courthouse Wednesday, the crowd at the city's Dewey Square occupation site has grown, along with a tighter police presence. The occupiers released a conciliatory statement about the police action yesterday but the mood on the street seems noticeably tenser than it did a week ago.

The arrests, made by more than 200 police, included what Salon rightly called "the worst moment" of the burgeoning occupation movement: the videotaped clubbing of aging Vietnam veterans—Winston Warfield, a U.S. Army veteran, and John Niles, a U.S. Marine veteran, both of Veterans for Peace. The men were knocked down by a shaved-headed officer surrounded by baton-wielding boys in blue. One vet was punched in the throat.

Others occupiers were clubbed with batons, pepper sprayed, and hauled away, according to eyewitnesses. They said the police made no distinction between protesters, medics, or legal observers. Urszula Masny-Latos, who serves as the Executive Director for the Massachusetts branch of the National Lawyers Guild, was arrested as were four medics trying to treat the injured.

On Tuesday morning Occupy Boston released a statement saying the group "bears no ill-will towards the men and women of the Boston Police Department who were simply following orders." The statement continued:

“We hope that someday the peaceful pursuit of economic
justice will not provoke the beating of elderly veterans and the arrest of medics and legal observers. We encourage everyone who continues to feel as strongly as we do about limiting the influence of Wall Street on our democracy to join us tomorrow, and in the future, down in Dewey Square."

The protestors, increasingly frustrated that their rights have been eroded, were charged with two criminal counts of unlawful public assembly and trespassing after police closed in on them at 1:30 am Tuesday. On the fifth floor of the Edward W. Brooke Courthouse, a bearded, silver-haired Judge Raymond Dougan Jr.—widely regarded as the most lenient judge on the Suffolk District bench—reduced the charges to civil violations and ordered the defendants to pay a $50 fine each.

The courtroom was filled to capacity with occupiers in three rows of pews, many wiggling fingers of greeting at each other, one of the more enduring and endearing sign-language idiosyncrasies of the movement.

As the first group of scruffy-looking defendants raised shackled arms to acknowledge the court as their names were read aloud, they were told they could challenge the criminal counts or accept the disposition of the court reducing the charges to civil violations. No one contested the deal--or wiggled their fingers.

Outside, the weather had shifted to seasonably cooler under thicker, low-level cloud cover Wednesday morning, but the protestors vowed to stay through the winter if their demands are not heard in Washington.

Nadeem Masen, a recent MIT graduate and businessman who is emerging as the most eloquent spokesperson for the Boston group, said they were digging in for the winter, using pedal power to generate electricity for computers and heaters. "I think when we talk about heat and winterizing, we're going to be fine," he said.

The original Dewey Square site, a once empty field first occupied ten days earlier, had been growing every night, thanks in large part to good relations with Mayor Thomas Menino and the Boston Police. Those relations faltered late Monday evening as the campsite expanded across Congress Street to the Rose Kennedy Greenway, a sculpture-dotted park.

The second parcel of occupied land had grown organically Monday evening from the overflow from Dewey Square, which remains filled with hundreds of tents and tarps. The crowd of mostly countercultural protestors was swelled further as more than a thousand Boston college students--stopped from marching across the Charlestown Bridge--found their way downtown. The sense of disorder grew as group of hockey fans leaving the Boston Garden clashed with protestors on Friend Street. Then the police moved in as the demonstrators shouted "shame on you."

Police have now erected barricades around the second site to keep out any potential occupiers.

The crowd seemed sizably bigger in the aftermath of arrests. The growing publicity is attracting  more people like James Stoehn, a 46 year-old man who lost his specialty retail business and then refinanced his home mortgage on a subprime loan.

“I went through the whole rigamarole with Bank of America, but everything was set up like a house of cards for me," he said. "I’m also here now because I’m really into nonviolence. My concern is: where’s this all going now that people are getting their heads broken?”

The tougher police tactics mark a new test for the occupation movement's consensual decision-making process. Brendan Curran, a 27 year-old minister in training at the United Church of Christ, had been urging his fellow protestors to brace for the crackdown.

“Slowly we’re learning what it means to be an autonomous community," he said. "After all, we’re Occupy Boston, not Occupy Dewey Square. Rather than getting bogged down in extraneous conversation, we need to resist together.”

Among more radical protestors the mood shifted from the festive free-for-all atmosphere of Monday night to angry defiance. One young blonde man stepped to the microphone to denounce the press as well as the police.

“Some people here say the police are our friends, but I don’t see how people who pepper spray us and prevent medics from treating us can be our friends," he said. "The police are not on our side. When it comes down to it, they will protect the 1 percent. The press too. As far as I’m concerned, they’re like mushrooms. So feed ‘em shit and keep ‘em in the dark.”

Others urged the occupiers not to air their differences publicly.

Some visitors complained that their voices were not being included in the so-called "99 percent." Phil Primeau, a 23 year-old newlywed on his honeymoon from Rhode Island, told the group he felt that legitimate reform was in danger of being hijacked by fringe groups.

“I’m an average guy,” he said. “I work in a warehouse, I know the economy is not great, that a lot of people got screwed, but you people need to stop talking among yourselves. You say you speak for 99 percent of the people, but are 99 percent for anarchism or just reform? You need to accept the reality that most mainstream people support the free market. Otherwise you’re gonna alienate the mainstream.”

Another man begged to differ. “We have anarchists here,” he allowed, “but this camp holds such a broad diversity of people, you have to wonder why they’re all here.”

Not all of those arrested were permanent occupiers. Michael Turner, 58, and his partner of 33 years, Felicity Turner, who run a small home-repair business, had previously donated printers and scrap lumber for building materials but had not slept at the occupation site.

When they saw a notice on the Occupy Boston web site asking for help in form a human shield around the expansion site, “Michael was out the door and on the Red Line," said Ms. Turner. "He called home about 10:30 pm and said it was boring. Then he called at 2 a.m. and said he was about to be arrested.”

"They gave me the option of leaving, saying, ‘You don’t really want to go to jail, do you?’" Turner explained. "I said, “Yes, that’s why I came down, so they led me off to the paddy wagon.”

It wasn’t the first arrest for Turner who was locked up 40 years during the Vietnam era when the U.S. Marines came to recruit at Boston University. With the help of National Lawyers group, he was released early Tuesday.

The movement's growing pains are likely not over. This Saturday an array of pro-labor and anti-war activists, also upset with the dominance of money in politics, are planning to march from Boston Common to Dewey Square As the movement swells, the endorsement of traditional labor groups that fill the campaign coffers of Washington politicians is a sticking point for many occupiers. Some fear the unions will swallow or co-opt the social media activist movement.

“We have to be careful,” said Jason Potteiger, media liaison for Occupy Boston. “We haven’t accepted money and, if we do, we’ll make it a transparent process.”