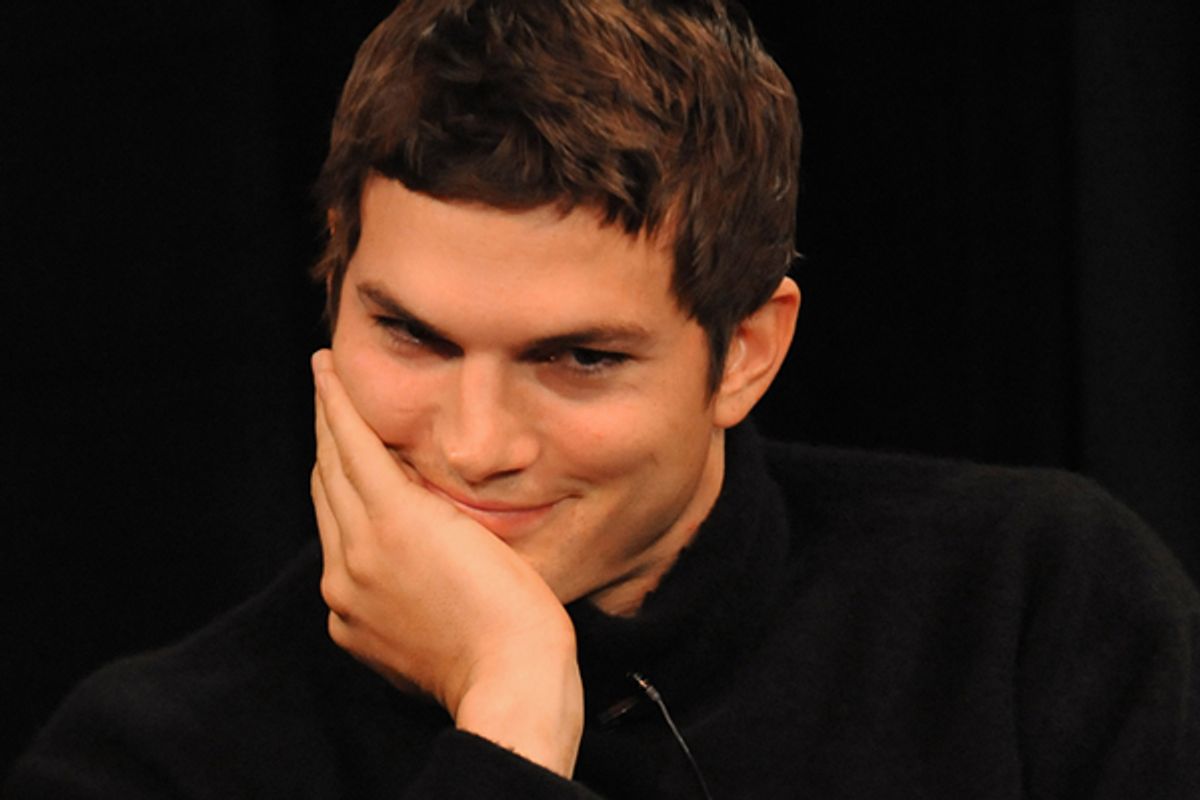 You can't be a married celebrity without being haunted by rumors of infidelity. But on Tuesday, the tawdry frenzy surrounding Ashton Kutcher's alleged recent indiscretion got a novel twist – with the casual allegation that the encounter wasn't just extramarital, it was downright unsafe.

It was only a matter of time before the blonde who purportedly romped with Ashton Kutcher on the eve of his wedding anniversary last month sold her story to the tabloids. And sure enough, this week, Sara Leal spilled her account of a night of forbidden passion with the married star of "Two and a Half Men" to Us magazine. But along with the uninspired details that "We had sex twice," and the underwhelming report that "He was good, but it wasn't weird or perverted or creepy," what's troubling about Leal's account is her bold brag that Kutcher didn't wear a condom.

Exactly what happened in a San Diego Hard Rock hotel a few weeks ago is known only to those who were there. But that particular detail – and Leal's eagerness to share it – show just how much attitudes and behaviors have changed in the last few years. And that taking risks is no longer the great taboo it once was.

Late last month, right around the time Sara Leal was allegedly getting her Magnum-free freak on, the International Planned Parenthood Federation was releasing a sobering study  on the dramatic rise in unprotected sex among young people worldwide. Since 2009, the number of teens forgoing contraception when they bed a new partner has spiked 39 percent in the United States – and a harrowing 111 percent in France. Unsurprisingly, among the reasons cited were not liking it and not having adequate access to it. The CDC estimates there are "approximately 19 million new STD infections each year, which cost the U.S. healthcare system $16.4 billion annually."

Leal is not some doe-eyed high school sophomore, but at 22, she's young enough to have a different perspective on the risks of unprotected sex than her AIDS-era elders. Whatever she and Kutcher may or may not have done, however, her cavalier boast seems a way of making the story more intimate and authentic. She didn't just have sex with a TV star, folks – she had the real kind! The kind you'd have with a boyfriend! And then they talked about astrology.

Whatever one might think of the morality of a tale that involves the words "Ashton Kutcher" and "hot tub," what's really skin-crawling about Leal's tell-all is the utter lack of concern she seems to have for herself or her sexual partners. Instead, she paints a picture of being swept up by a handsome, famous man with "good endurance." And by insisting the encounter was condom-free, she seems to want to imply a certain level of intimacy and trust -- while instead coming off as dangerously deluded.

Condoms aren't synonymous with spontaneity or romance. They tell a person, look, we've got to protect ourselves here from any potential diseases. They immediately signal that both parties have had a sexual past and a likely future. Opening the package and getting the sucker on don't always go smoothly – and they feel different once you're going at it. That's why even now, for all the rampant sex scenes on prime time and in the movies, you rarely see a scene of someone fumbling with a box of prophylactics. A condom is life's way of saying, "Please don't give me the clap," and that's not an easy statement to make with someone whose pants you're trying to get into.

Yet admitting you bail on protection doesn't make a person seem sexy or spontaneous. It just makes her sound reckless and dumb. And Leal might now have a harder time finding anybody else who wants to go where she claims Kutcher has boldly gone. Because though she, like the increasing number of teens gambling with their bodies, doesn't seem to mind that one Americans in six has herpes or that nearly 3 million cases of chlamydia are reported annually, there are still plenty of sexually active adults out there who accept the stark reality that the pleasures of sex have to go hand in hand with the responsibilities of it.