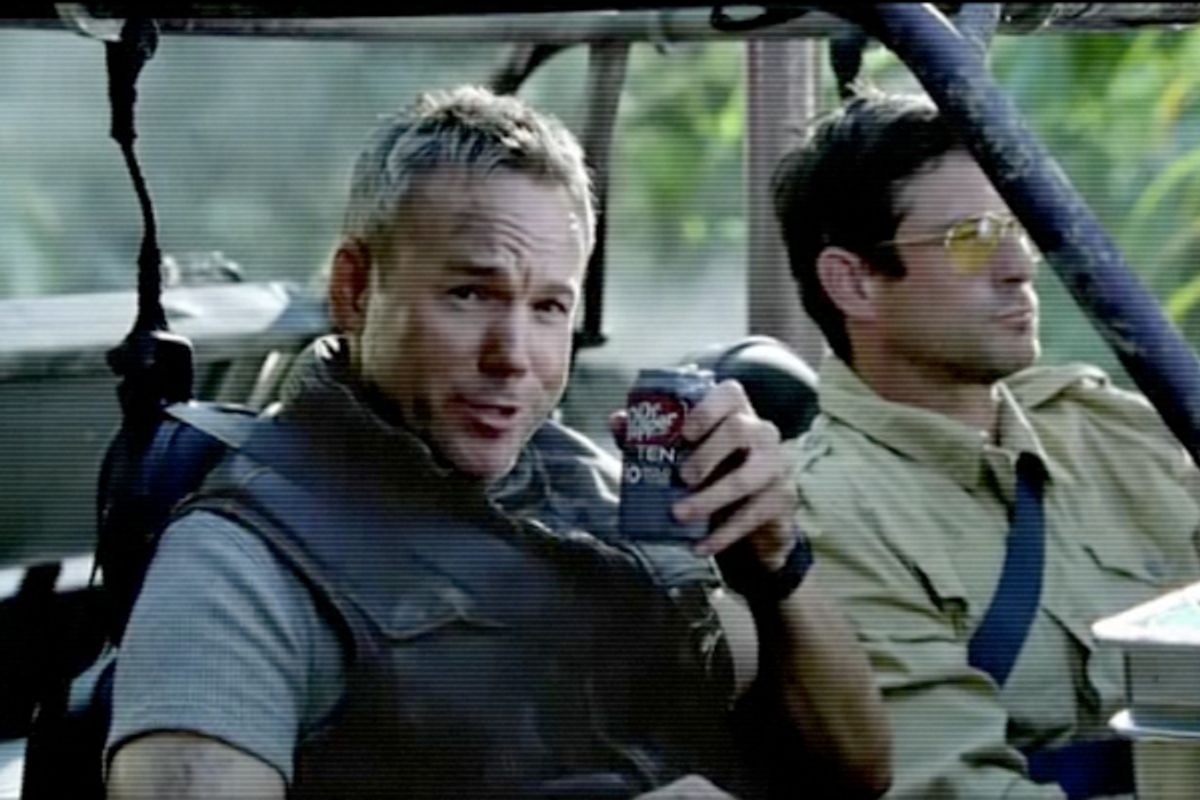 You'd think the most revolting thing about a 10-calorie version of Dr. Pepper would be its mere existence. But no, the medicinally flavored soft drink has managed to spread a bad taste without even making you pop open a can. How? Good old-fashioned misplaced machismo.

As part of its ongoing campaign designed to reassure men that they can drink diet soda without growing a vagina, Dr. Pepper is boldly asking consumers if they're "man enough" for the can, proclaiming, "It's not for women." I guess we females can just stick to Diet Dr. Pepper, because the difference between men and ladies comes down to "10 bold calories" and scrubbing that chick word "diet" from your can.

This week, the company unleashed a new campaign on Facebook, including a "man quiz" and a shooting gallery that aims at girly things like lipstick. There's also an awkwardly worded "10 Man'ments" that includes alleged social network taboos like untagging unflattering photos and the use of "OMG" and smileys.

It's hard not to smell a strong whiff of cynicism within Dr. Pepper's gambit into caveman territory. It's not as if the advertising industry hasn't already had its share of boneheaded, backfiring sexist campaigns this year. Hasn't anybody learned anything from milk's PMS disaster or JC Penney's absurd attempt to sell ugly shirts with a classic clip from "Fast Times at Ridgemont High"? Phoebe Cates and her bikini deserve so much better than that, world. Both campaigns were quickly scrubbed, but the resulting attention did get people other than your grandmother talking about milk and JC Penney for about five minutes. Could Dr. Pepper be employing a similar, deliberately offensive tactic?

Or is Dr. Pepper, in its quest to be like its manly, low-cal soda bros Coke Zero and Pepsi Max, really just that stupid? The company's executive vice president of marketing Jim Trebilcock told the Associated Press this week that "Women get the joke." He said that the campaign is merely "a way to start the conversation that can spread and get people engaged in the product." But "conversation" doesn't equal "working up a thirst."

Earlier this year, Dr. Pepper rolled out an ad featuring a gun-toting, snake-punching dude defiantly asking, "Hey, ladies, enjoy the film? Of course not. Because this is our movie. And Dr. Pepper is our soda." OMG and smiley face, you can keep your dumb campaigns and your crap soda, fellas. Because a real man can drink whatever he wants without turning it into a display of penis waving. And when I want a light beverage that doesn't need to put down an entire gender to sell itself, I'll grab water.