How to realize the OWS vision

Five changes that would help this grassroots movement transform the nation 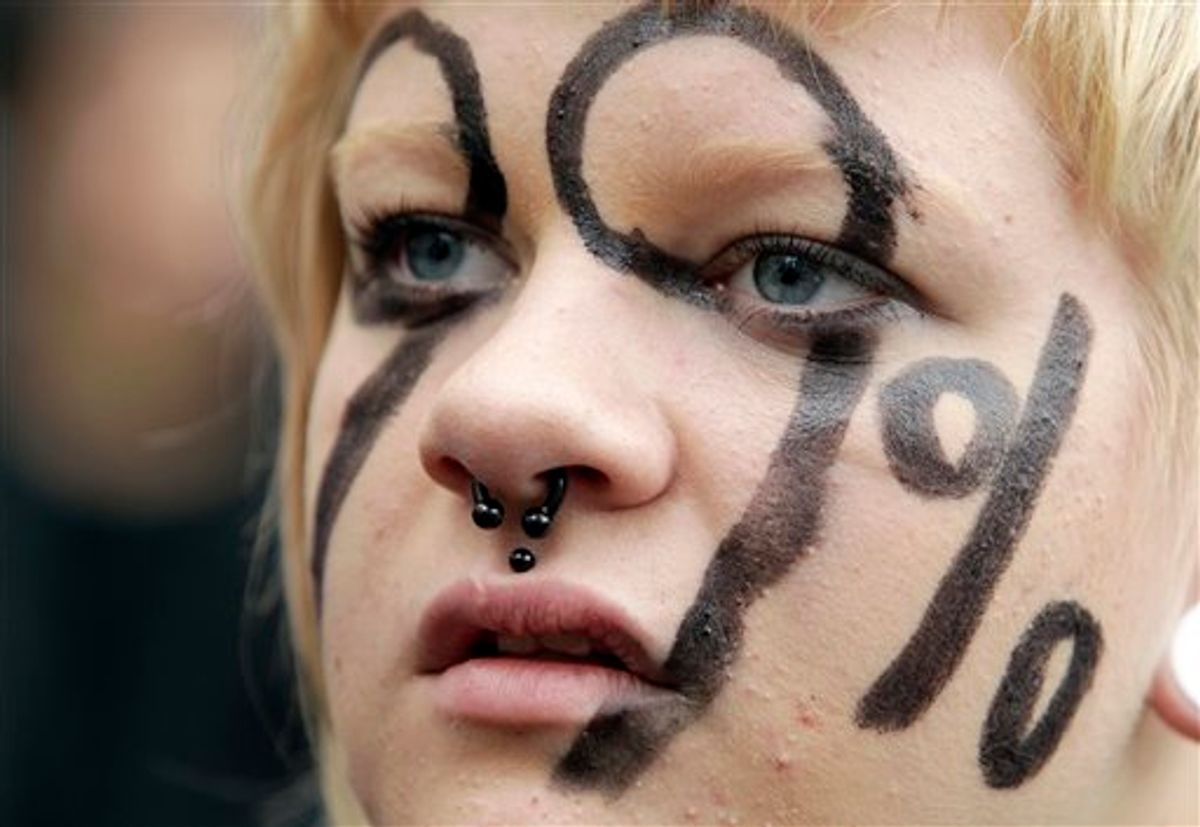 This article originally appeared on MinnPost

Jim Hightower likes to tell the story of the moving company in Austin whose slogan is, "If we can get it loose, we can get it moving." The tens of thousands of people occupying sites around the country, including Minneapolis, may be prying us loose from cynicism and despair.

The next step is to move the country.

Grassroots-driven fundamental change is not without precedent. We can look to the Arab spring. #Occupy Wall Street was self-consciously inspired by the occupation by Egyptians of Tahrir Square. But we can also look to our own history. At the end of the 19th century a political movement arose to confront many of the same concerns that torment us today: concentrated wealth, corporate power, the influence of money on democracy. The populist uprising led to the passage of state and national laws (e.g. antitrust legislation, minimum-wage and maximum-hour statutes) and several constitutional amendments. In 1913 the 16th Amendment allowed an income tax; the 17th Amendment, ratified the same year, required the direct election of senators; the 19th Amendment, ratified in 1920, gave women the right to vote.

What fundamental changes would honor the vision of #Occupy?  I offer five suggestions: two constitutional amendments and three laws.

1. Ratify an amendment: Corporations are not persons

The 14th Amendment, ratified in 1868, gave blacks the constitutional right of citizenship: "All persons born or naturalized in the United States, and subject to the jurisdiction thereof, are citizens of the United States and of the State wherein they reside. No State shall … deprive any person of life, liberty, or property, without due process of law; nor deny to any person within its jurisdiction the equal protection of the laws."

In 1886, in a case that had nothing to do with corporate personhood, the court clerk wrote a headnote to the case that contained these fateful sentences, "The court does not wish to hear argument on the question whether the provision in the Fourteenth Amendment to the Constitution, which forbids a State to deny to any person within its jurisdiction the equal protection of the laws, applies to these corporations. We are all of the opinion that it does."

Some 65 years later Justice William O. Douglas observed that "the Santa Clara case becomes one of the most momentous of all our decisions. Corporations were now armed with constitutional prerogatives." They made the most of these new prerogatives. The 14th Amendment, written to protect largely defenseless ex-slaves, was used mostly to protect powerful corporations. Of the 150 cases based on the 14th amendment heard by the Supreme Court between 1886 and 1896, 15 involved blacks while 135 involved business entities.

In the next 20 years, relying on the 1886 "precedent," the Supreme Court steadily expanded the number of constitutional rights accorded to this new type of person:  in 1893 the 5th Amendment  right of due process;  in 1906 the 4th Amendment protection against search and seizure; in 1908 the 6th Amendment right to a trial by jury. By the 1940s Justice Felix Frankfurter declared, "Artificial or not, corporations have won more rights under law than people have — rights which government has protected with armed force."

In early 2010 the Supreme Court gave corporations the right, as persons, to spend unlimited amounts of money to influence elections.

A wonderful sign at the Occupy Wall Street protest reads, "I won't believe corporations are people until Texas executes one."

We need a constitutional amendment consisting of four words: Corporations are not persons.

2. Ratify an amendment: Money is not speech

In 1976 the Supreme Court ruled that money is speech and therefore protected by the First Amendment. Today members of Congress spend 25-40 percent of their time begging for money. Political scientist Thomas Ferguson observes, "Public opinion has only a weak and inconstant influence on policy. The political system is largely investor-driven, and runs on enormous quantities of money."

When states or the federal government have tried to make elections fairer the Supreme Court says no. Vermont passed a law to cap campaign expenditures for state offices. The Court struck it down.

Congress tried to stop billionaire candidates from spending an unlimited amount of their own money on their own campaigns. The Supreme Court struck down the law. Speaking for a 5-4 majority, Justice Samuel Alito told Congress that trying to "level electoral opportunities for candidates of different personal wealth" is not "a legitimate government objective."

Jamie Raskin, a Maryland state senator and law professor at American university, points out that if members of the Fortune 100 spent only l percent of their profits on elections to protect and foster their interests, the total comes to $6 billion, more money than was spent for and on behalf of all congressional and presidential candidates in 2008.

We need a constitutional amendment consisting of four words: Money is not speech.

Economist Dean Baker suggests that a modest tax (0.25 percent) could easily raise more than $100 billion a year. "A small increase in trading costs would be a very manageable burden for those who are using financial markets to support productive economic activity. However, it would impose serious costs on those who see the financial markets as a casino in which they place their bets by the day, hour or minute."

Billionaire Warren Buffett has commented on the unfairness of having a lower tax rate than his secretary. That is so because most of his income derives from dividends and capital gains, which are taxed at half the rate as income from work.

In 2007 the 400 Americans with the highest income — nearly $345 million — were taxed at less than half the ordinary tax rate of 35 percent because most of their income was derived from investments. If we were to require that all their income be taxed at the 1999 tax rate of 39.6 percent, this alone would generate an additional $300 billion in revenue over the next 10 years.

4. Tax all income as ordinary income

Billionaire Warren Buffett has commented on the unfairness of having a lower tax rate than his secretary. That is so because most of his income derives from dividends and capital gains, which are taxed at half the rate as income from work.

In 2007 the 400 Americans with the highest income — nearly $345 million — were taxed at less than half the ordinary tax rate of 35 percent because most of their income was derived from investments. If we were to require that all their income be taxed at the 1999 tax rate of 39.6 percent, this alone would generate an additional $300 billion in revenue over the next 10 years.

5. Declare a moratorium on foreclosures

Foreclosures hurt individuals, neighborhoods and the economy. Dumping millions of homes on the market depresses the overall value of all real estate, increases unemployment and disrupts lives and neighborhoods.

The most effective way to stop the tidal wave of foreclosures is through permanent, sustainable loan modifications that reduce homeowners' mortgage principal and interest rates to market value.

In a 2010 report, National Peoples Action proposed one strategy. "11 million homeowners are $766 billion under water with their mortgages. Paid off over 30 years this means $73 billion a year [is] needed to reset all underwater homeowners' principals and interest rates. ... (That) would [require] about half of the $143 billion the top six banks alone are getting ready to pay in 2010 in bonuses and compensation."