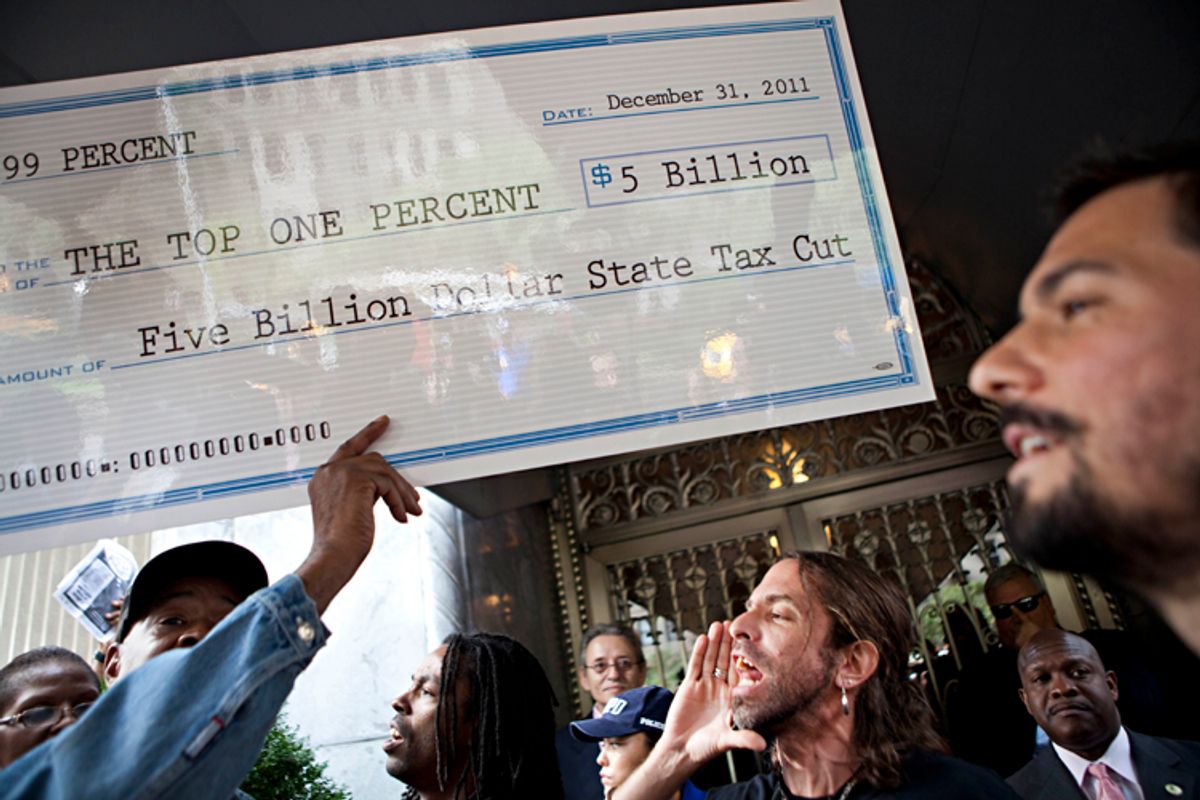 New York progressive and community groups joined by Occupy Wall Street protesters marched through one of the city's poshest neighborhoods on Tuesday, visiting the homes of several billionaires to pressure Gov. Andrew Cuomo and the state Legislature to extend the life of a surcharge tax on the state's wealthiest residents.

Besides being good theater -- a giant check representing state tax cuts for the rich was left on the doorstep of hedge funder John Paulson's Upper East Side townhouse -- the march amounted to an attempt by veteran community and labor-affiliated activists to harness the intense media and popular interest in Occupy Wall Street to advance a specific progressive policy goal.

"We're not trying to grab the steering wheel. We're not trying to say Occupy Wall Street is all about one issue. But this is a concrete example of the kind of policies that are screwed up," said organizer Michael Kink, executive director of Strong Economy for All, a coalition of unions and community advocacy groups. "I think public opinion is galvanizing around Occupy," he added.

Kink is also a former policy aide for the Democratic Party in the state Senate.

Cuomo and state Republicans favor allowing a surcharge on New Yorkers making more than $200,000 per year in taxable income -- the so-called millionaires' tax -- to expire at the end of the year. Assembly Speaker Sheldon Silver, a Democrat, said last month he still wants to see the surcharge renewed.

The march of roughly 500 was organized by a new coalition of groups, "99 New York," whose name is a reference to the unofficial slogan of Occupy Wall Street, "We are the 99 percent," and which formed in the last few weeks. It is made up of Strong Economy for All, United NY, the Working Families Party, New York Communities for Change, and MoveOn. Activists from Occupy Wall Street were also involved in the planning of the march, said 99 New York spokesman Douglas Forand.

"Rupert can you heeaarrrr me up there?" screamed one marcher outside Murdoch's building on Fifth Avenue. "I would like a croissant!"

Marchers got waves and smiles from many of the service workers in the neighborhood -- guards, cleaners and doormen -- but were met mostly with bemusement or irritation by the area's well-heeled residents.

Scores of police officers and NYPD vehicles kept protesters on the sidewalks and were posted outside the homes where the march stopped (here is a photo of Koch's front door). There were no arrests.

Much like the giant union-backed march last Wednesday, the Upper East Side protest had the trappings of an action put together by veteran activists. There were prefab signs like this one, "School budgets get slashed to increase their stash." There was a professional press contact, in contrast to the spotty, volunteer P.R. operation at Occupy Wall Street in Liberty Square. That seemed to pay off for the organizers: The press turnout was impressive. At times it seemed like there was one reporter, photographer or cameraman for every five protesters or so. On the other hand, the crowd took a while to get the hang of the human mic, the call-and-response system of human amplification that has become a signature of Occupy Wall Street.

More actions are planned for this week on the millionaires' tax issue. On Wednesday 99 New York will be at Chase Plaza protesting Dimon. On  Thursday there is an "austerity breakfast at Tiffany's" planned, which will also highlight the wealth gap.