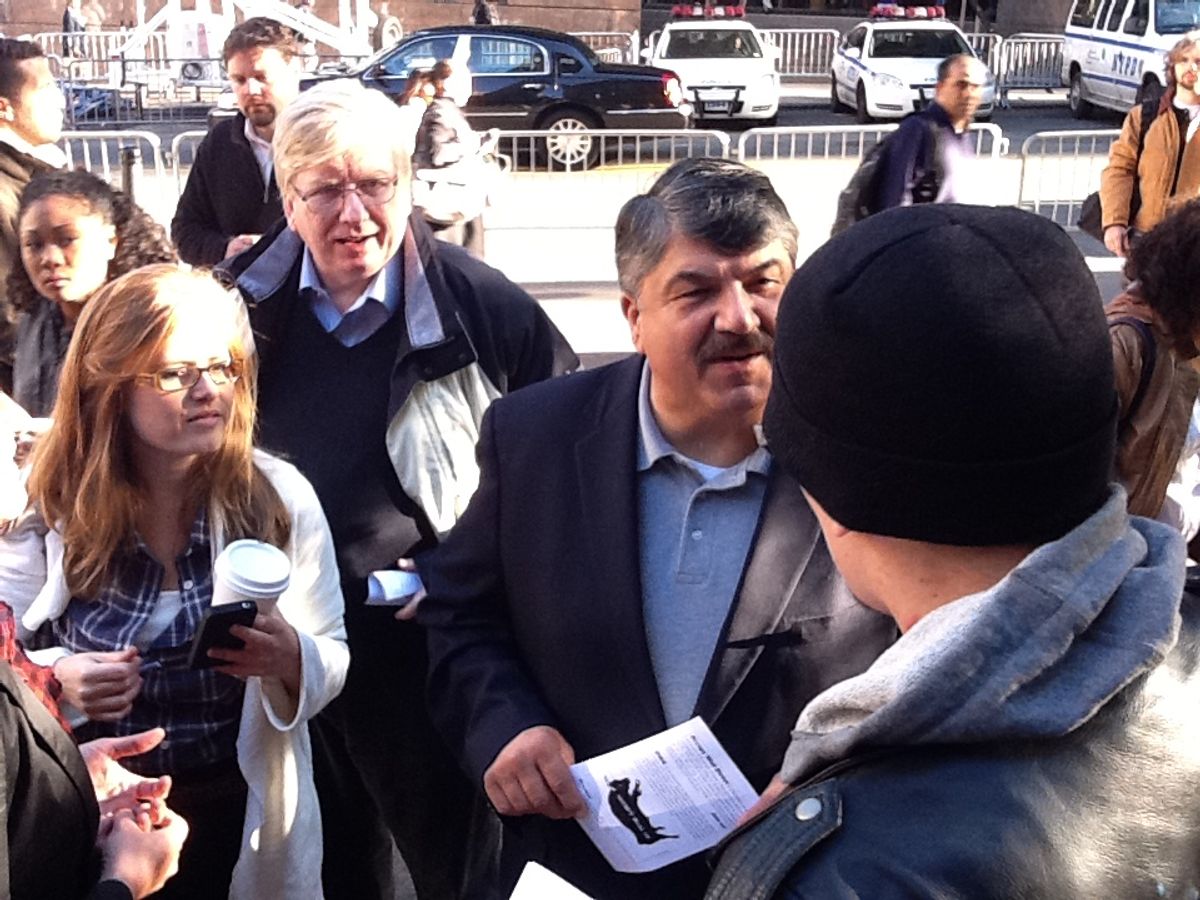 Early last Friday morning, as the Occupy Wall Street protesters were just uncurling from their sleeping bags, I went downtown for a walk-through of their campsite at Zuccotti Park, now also known as Liberty Plaza. I met up there with AFL-CIO president Rich Trumka and New York City Central Labor Council president Vincent Alvarez. (I’m president of the Writet's Guild East, an AFL-CIO-affiliated union.)

There were just a few of us in our group, and as the sun burned through the dawn’s chill not much attention was paid as we took the tour. We kept our voices low and walked carefully, doing our best to keep from tripping over and waking those who were still asleep.

One or two reporters hooked up with us, not including the kid you may have seen with the fake cardboard Fox News camera and microphone, who tossed out questions as he walked along behind us. That was the extent of the media coverage.

Every once in a while someone would ask who Trumka was and he would stop and chat. At the end of our visit, he sat with a group at the west end of the park, across from ground zero, and quietly offered encouragement, discussing strategy, goals and, on a practical level, the essentials needed to keep the protest going.

As many have noted, this so-called ragtag army of students and activists has ably taken democracy at its rawest and organized it well: the whiteboards filled with information, the computers mobilizing social media, the makeshift library of plastic bins filled with books and magazines, the committees that handle everything from “direct action” and training to hygiene and childcare. As for their general assemblies, at which speeches and group decisions are made, many have made fun of the call-and-response “people’s mike” that sometimes makes them sound a bit like the chanting members of a cult.

But ask yourself if it’s no more peculiar than many of the words and deeds of those who currently constitute the U.S. Congress. Unlike the Bible’s lilies of the field, those honorable gentlemen and women toil not but spin like hell. Consider the difference between an earnest and sincere gathering of committed men and women who for the most part only want to see our country pulled back from the abyss, and a Capitol Hill where legislators view the needs of a despairing nation as little more than moves in a punch-drunk game of fantasy league football.

Oh, and I didn’t think the park “smelled like an open sewer,” as Rupert Murdoch’s New York Post reported this week (the city reports that not a single complaint has been made to its 311 helpline). In fact, while I was there, the predominant aroma was that of hunger-inducing spices floating from the trucks of food vendors parked at the curbside. Neither was there any evidence of the blatant sex, drugs and public defecation the paper reported, but admittedly it was early and in any case I tend to usually miss out on that kind of thing.

In fact, there’s a lot of creativity and intelligence at work down there. Just read the movement’s snappily edited and written newspaper – The Occupied Wall Street Journal, of course – and take a look at some of their placards: “If only the war on poverty was a real war. Then we would actually be putting money into it” (Cornel West was holding that one), “The police are one layoff away from joining us,”  “You know things are messed up when librarians start marching.”

Are there miscreants among the crowd, hangers-on and even provocateurs? Sure. Speaking as an experienced veteran of demonstrations and picket lines, that’s been true since humankind first gathered together to express dissent. Lowlifes always try to latch on. Just the other day right-wing darling James O’Keefe, the puny scourge of ACORN and public radio, showed up in a business suit, tie and glasses, apparently hoping to provoke a protester into mistaking him for someone important and pummeling him with an empty pizza box. Most hands extend in solidarity but there are always some who will close theirs to make a fist or an obscene gesture.

At the end of our visit, as Trumka was leaving, a group of men from the United Steelworkers arrived from Jersey to take a look for themselves and offer support for the Occupy Wall Street movement. Some wore hard hats and I remembered how, on May 8, 1970, after Nixon’s invasion of Cambodia and the killing of four students by the National Guard at Kent State University, members of the building and trade unions, not very far from where we stood,  beat up protesters much like the ones now camped out at Zuccotti Park .

As the New York Times' legendary Homer Bigart reported back then, “Helmeted construction workers broke up a student anti-war demonstration in Wall Street yesterday, chasing youths through the canyons of the financial district in a wild noontime melee that left about 70 persons injured.” Kids were savagely kicked and pounded with tools, crowbars and yes, hard hats.

More than four decades later, all that has changed. The fate of our economy and our collective futures are so dire, unions have joined with the Occupy Wall Street activists. They have energized organized labor and the entire progressive movement, because these groups know that only with the strength of a unified voice putting truth to power can the plutocracy of government, industry and financial institutions be forced to budge even an inch from the avarice that values profit above people and domination over freedom.

I remembered, too, something I wrote a year and a half ago, recalling how much of the momentum of those 1970 antiwar protests and a national student strike vanished with the pleasures of summertime and dwindled – for a while at least --  into something an editor friend dubbed “the Frisbee revolution.”

I wrote, “Despite all the anger and worry today -- an economy in shambles, the loss of jobs and security, wars continuing in Afghanistan and Iraq, a dysfunctional government hobbled by the stranglehold of campaign cash and political hackery -- there's a similar lack of interest afflicting many of those who rallied to the cause of Barack Obama in 2008, knocking on doors, contributing money – voting.”