Corporate baby-making has a lot of unintended -- and troubling -- consequences 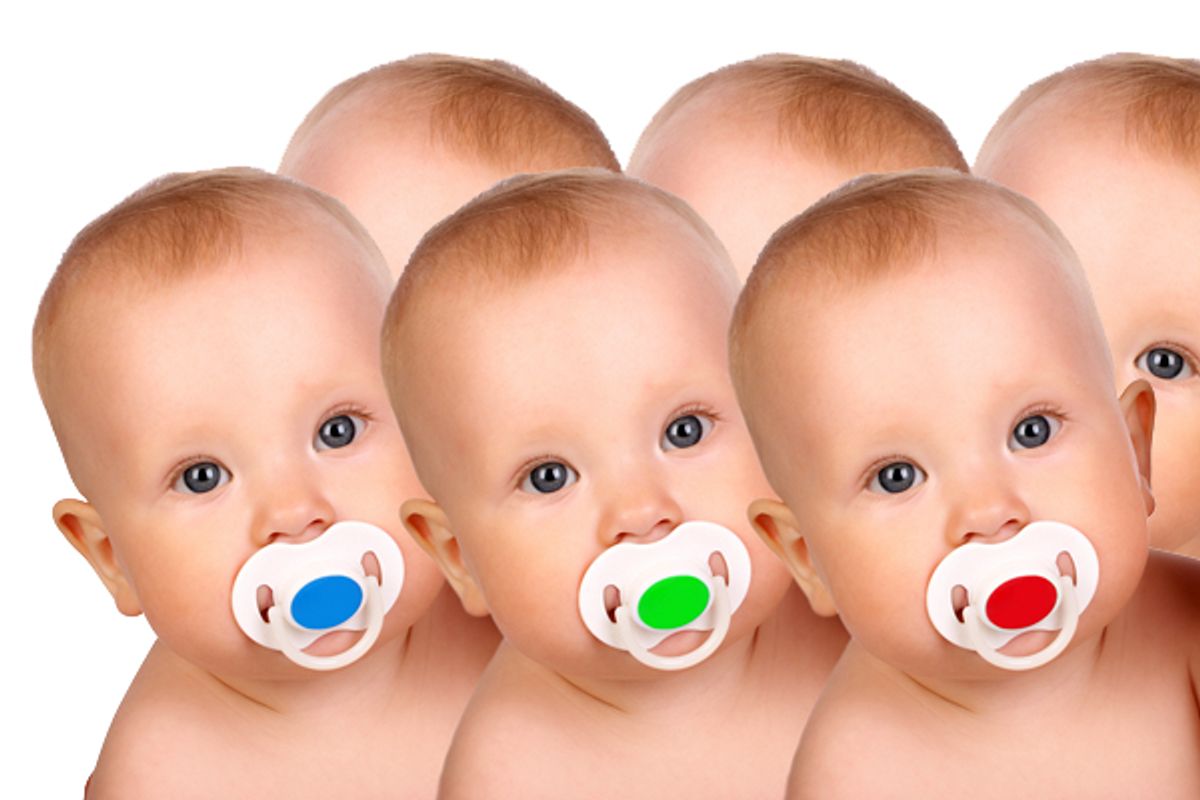 On the reality show "Style Exposed: Sperm Donor," set to air Thursday, Oct. 13, we learn that while Seisler donated anonymously, he later discovered the Donor Sibling Registry, a website created to help donor-children find their biological fathers and half-siblings. After posting his contact information and "donor number" at the DSR, he began receiving emails from mothers who had bought and used his sperm.

"I want to be available to these families," Seisler, now a Boston lawyer, says on the reality show. "I'm kind of curious as to what are these kids like."

When a friend asks whether he plans to attend 74 birthday parties every year, Seisler demurs. "They're not my kids," he says.

The New York Times reported recently on a man whose donated sperm has produced 150 children, along with other donors who, thanks to data revealed by the DSR and similar sites, have "fathered" 50 or more.

Super-spawn stories are becoming common because sperm banks behave like corporations, says Rene Almeling, an assistant professor of sociology at Yale and the author of "Sex Cells: The Medical Market for Eggs and Sperm" (University of California, 2011).

"In this country, we have moved from very small-scale custom production of sperm to mass-manufacturing. The national supply of sperm is concentrated in a small number of large, for-profit companies," Almeling says.

This is a recent development. For most of the 20th century, sperm donation was a boutique, on-demand affair. Typically, when a couple told their private doctor that they'd been unable to conceive, "the doctor would go out and yank a med student or medical resident off the rotation." In exchange for a small fee, "that student would provide a sample which would be immediately transferred into the patient in the next room," Almeling says.

The 1970s saw the first commercial sperm banks using frozen sperm. These boomed during the AIDS epidemic, when frozen sperm that had been tested comprehensively for diseases seemed safer to a frightened public -- and government agencies -- than fresh effluent.

This launched what Almeling calls "the mass manufacturing of sperm," along with catalogs "that you can flip through online to select your donor based on race, hair color and SAT score."

"Only a very small percentage of men are accepted as sperm donors. Sperm banks invest a lot of money in finding donors," which entails medical screenings. To offset costs, "they usually ask each donor to donate once a week for a year. That's how you end up with one donor producing hundreds of samples. That's how you get these large caches of genetic material being shipped all over."

In those boutique-donor days, secrecy and anonymity were paramount. In this new era of openness, more parents tell kids they were donor-conceived. And more kids grow up wanting to meet their donors.

"It's a way of learning more about themselves," says Alice Ruby, executive director of the Sperm Bank of California (TSBC), a Berkeley nonprofit whose voluntary Identity-Release Program, patented in 1983 and allowing donor-conceived adults to contact their donors, was the first of its kind worldwide.

"When people are struggling to conceive, often all they're thinking about is bringing this cute baby into the world. We want to help people conceive, but we're taking a long-term approach that they might not have the time or ability to take. We're thinking: Once that cute baby grows up, what if he or she wants to know more?"

TSBC limits the use of each Identity-Release Program donor's sperm to 10 families.

"Knowing that you're potentially involved with 10 different families feels more manageable than being involved with 20 or more families," Ruby says. The limit also controls for "any unexpected and unforeseeable health issues that might arise."

Sperm banks interview donors about their families' medical histories. But any self-reporting situation is susceptible to lies and honest ignorance. Who knows all about his own DNA?

"The danger of one man donating so much sperm is that half-siblings might unknowingly have children together. They would have a much higher risk of passing on a recessive disease than two people who are not related," says genetics expert Ricki Lewis, who has authored several textbooks and the forthcoming "The Forever Fix: Gene Therapy and the Boy Who Saved It" (St. Martin's, 2012).

"A recessive disease is one that requires both parents to be carriers: Each parent has the mutation, but also a functioning copy of the gene in question too, so he or she is not sick. For a rare disease -- say, one that affects one in 10,000 people, or even rarer -- the chance of two people being carriers is very low. But if two people are half-siblings, and the sperm donor is a carrier of a recessive disease -- and we probably all are -- then each partner has a one-half chance of inheriting the mutation," Lewis says.

Two unwitting half-sibs bearing a child with a recessive disease such as cystic fibrosis or Tay-Sachs "would be the short-term risk. Longer term, more people in the population would be carriers and, over time, certain inherited diseases would become more common."

"If a man intentionally withholds information on a single-gene disease, that would be unethical," Lewis asserts. "But Asperger’s and depression? Not so much. The man is selling something; a couple is buying something. Children never have a choice of who their natural parents are, so I don’t see too many ethical problems."

Ben Seisler's fiancée sort of does. Lauren, who is planning to start a family after her wedding, has just been informed that her future children already have dozens of half-siblings, like it or not.

"I don't know how many children Ben's sperm has created," a grim-faced Lauren says in "Style Exposed: Sperm Donor." "I never wanted to know." She stopped counting at 25.

"I'm now starting to associate those numbers with people -- with actual children -- and it's overwhelming."

Would he have said the same thing were Seisler schizophrenic, a serial killer and/or hideous? Does Seisler's sweet face, his solid build, his sense of humor, decent dress sense, employability and obvious intelligence make his mega-paternity more awesome?

Every ejaculation contains up to 500 million sperm. If he donated regularly for three years, we're talking about enough little Ben Seislers to repopulate the earth. Assessing Seisler, are we allowed to say that seems okay? Probably not. But it's not up to us. It's up to those sperm-shoppers who choose Seisler. In any mode of conception short of rape, women vote with their wombs.

In "Style Exposed: Sperm Donor," a Seattle single mom who used Seisler's sperm to conceive two children explains that she selected his anonymous profile from a catalog because she wanted her babies' biological father to be athletic and professional, to seem like a nice guy and to resemble her.

Looming behind any scenario in which millions of women shop for DNA from among millions of strangers based on characteristics such as looks, education, attainment, culture and class is the specter of eugenics: the pseudoscience -- popular in early 20th-century America and Nazi Germany and elsewhere -- of improving human populations via marriage restrictions, sterilization and selective impregnation. We don't practice eugenics in this country anymore. Or do we? Is it the flip side of death panels?

Maybe. But were I sperm-shopping, would I want Ben Seisler's sperm? Probably.