Park at the center of Occupy Wall Street will be cleared at 7 a.m. -- but protesters won\'t go willingly 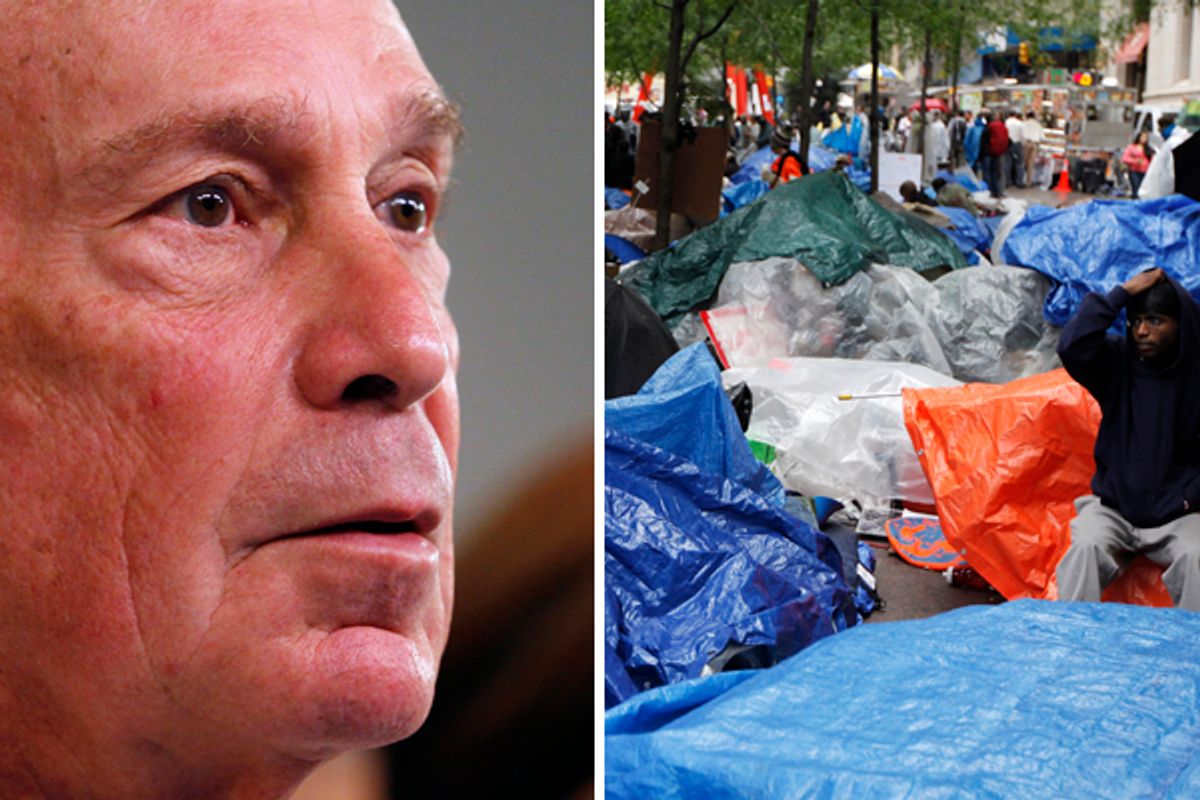 The cleaning notice being handed out in Zuccotti Park today is posted below. The gist:

--the cleaning will start at 7 a.m. ET Friday and begin on the western side of the park

--Representatives from Brookfield, which owns the park and wrote the notice, will be on hand to "delineate" the sections to be cleaned

--each section will take four hours to clean, for a total of 12 hours

--anything left behind will be thrown out

As I noted earlier, the occupiers of Wall Street have set up considerable infrastructure in the park, so simply getting up and leaving is not as simple as it might sound.

Occupy Wall Street, meanwhile, does not intend to comply with the "forcible closure" of the park by Mayor Michael Bloomberg and Brookfield, the company that owns Zuccotti.

In a new statement, the protesters note that the rules of the park (see below) include things like "no lying down" and "no sleeping bags." If those rules are enforced by the NYPD, the occupation of the park is over.

So they are planning a "non-violent eviction defense" at 6 a.m. (I will be on the scene early tomorrow morning, so watch my Twitter feed and Salon for updates.)

Occupy Wall Street is committed to keeping the park clean and safe — we even have a Sanitation Working Group whose purpose this is. We are organizing major cleaning operations today and will do so regularly.

If Bloomberg truly cares about sanitation here he should support the installation of portopans and dumpsters. #OWS allies have been working to secure these things to support our efforts.

We know where the real dirt is: on Wall Street. Billionaire Bloomberg is beholden to bankers.

We won't allow Bloomberg and the NYPD to foreclose our occupation. This is an occupation, not a permitted picnic.

Brookfield spokeswoman Melissa Coley sends along this statement from the company:

The manner in which Zuccotti Park has been used for the past several weeks has created unsanitary conditions.

Last night, the City of New York notified the public of Brookfield’s plan to clean Zuccotti Park, in phases, on Friday, October 14. The park has not been cleaned in four weeks, a process that is normally undertaken every night. Our goal is to keep the park clean, safe, and accessible to all.

As sections of the park are cleaned, they will re-open to the public. All are welcome to enjoy the park for its intended purpose as an open neighborhood plaza, in compliance with posted rules.

Brookfield appreciates the cooperation of the protestors, the NYPD, and the general public in this effort.

UPDATE: The police department is now saying that protesters will not be allowed back into the park with sleeping bags and other gear that would seem to be necessary for any long-term occupation. From the Times:

“After it’s cleaned, they’ll be able to come back,” [Police Commissioner Ray] Kelly told reporters after a memorial ceremony in Battery Park. “But they won’t be able to bring back the gear. The sleeping bags, that sort of thing, will not be able to be brought back into the park.”