Anita Perry: We know pain of unemployed because our banker son quit his job 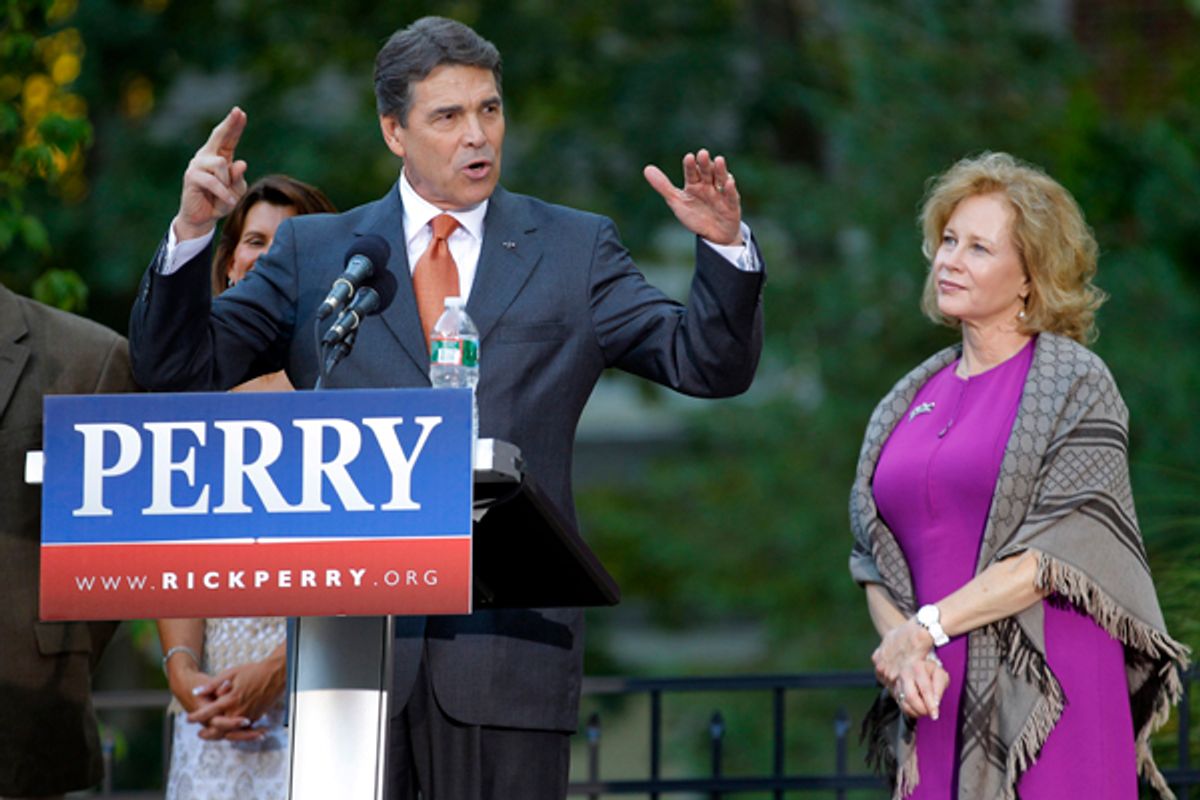 Anita Perry, Rick Perry's wife, is, it seems, a positive influence on the right-wing Texas governor. Her guidance is seen in his support for HPV vaccines and fundraising for victims of domestic violence. But she's also, it turns out, awful at speaking off-the-cuff in the middle of a high-stakes presidential campaign.

Being a candidate's spouse is really a horrible gig. Most candidates' spouses are non-politicians forced suddenly to act like politicians. Dumb things will be said. But the grandiose victimology on display in Anita Perry's talk before a South Carolina college yesterday is still pretty egregious. You may have seen it:

“We’ve been brutalized and eaten up and chewed up in the press,” she said.

“It is a comfort to know that I am in this place where I can feel the presence of God. We are being brutalized by our opponents, and our own party,” she said. “So much of that is, I think they look at him because of his faith.”

Rick Perry, running for the Republican nomination for president, is falling in the polls because he loves God too much. Yes, that's it exactly. And the press won't stop "brutalizing" her poor husband, solely because he is the world's best Christian. (She's also using "brutalize" incorrectly -- unless those press attacks have utterly dehumanized poor Rick -- but basically everyone does, so we'll let that go.)

But the "brutalized" routine was not half as silly as what Anita Perry said today at a diner. Apparently, the Perrys know all too well the pain of unemployed Americans, because their own son has lost his job. Not just that, but he was made jobless by the Obama administration's onerous regulations! The conservative nightmare scenario played out right in their own family!

"My son had to resign his job because of federal regulations that Washington has put on us," Mrs. Perry said while campaigning for her husband in South Carolina, after a voter shared the story of losing his job.

She is speaking of Griffin Perry. Griffin Perry, who worked at Deutsche Bank until recently, when he had to quit in order to work on his father's presidential campaign.

"He resigned his job two weeks ago because he can't go out and campaign with his father because of SEC regulations," she continued, referring to the Securities and Exchange Commission. "He has a wife... he's trying to start a business. So I can empathize."

"My son lost his job because of this administration," she said a few minutes later.

She can relate to the downtrodden because Barack Obama forced her son the banker to quit his job in order to help his father run for president. Griffin Perry is the 53 percent.

Maybe Perry should take his wife off the campaign trail for a while? I am positive she'd appreciate it.