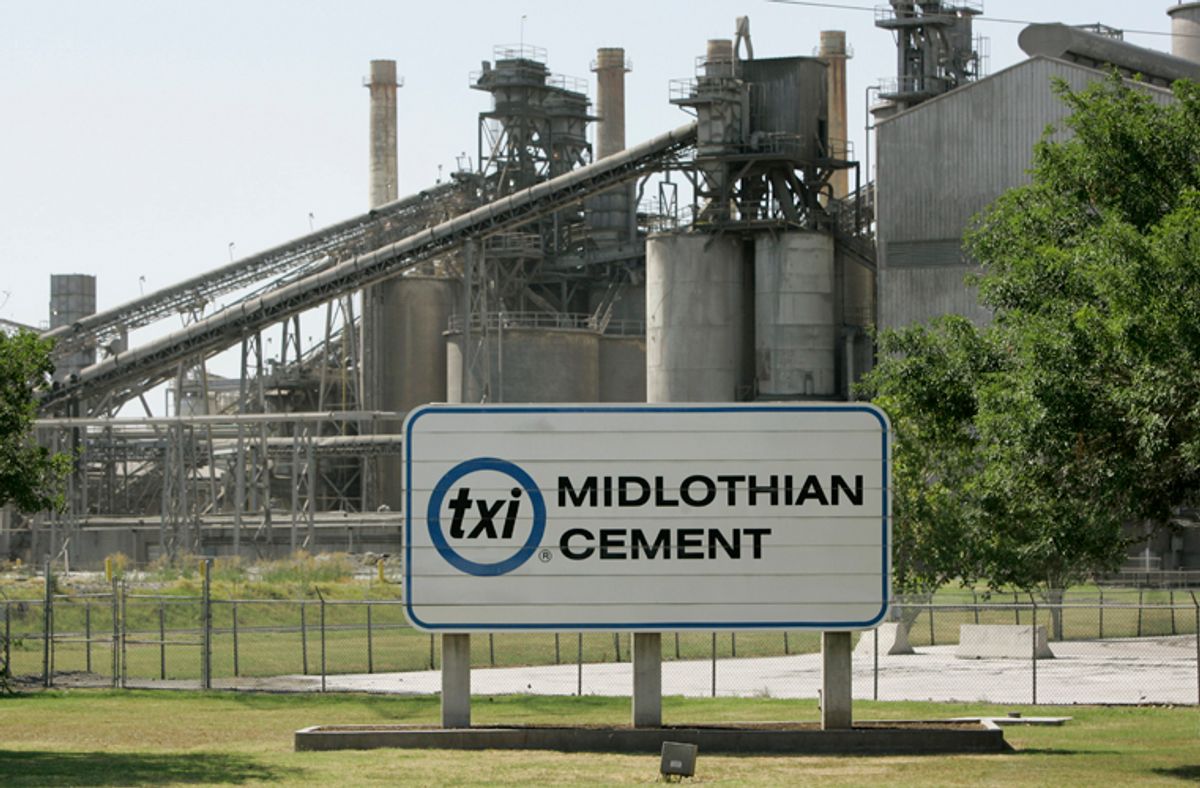 With the passage of two bills rolling back federal regulations of industrial boilers and delaying regulation of cement kilns, House Republicans opened a new front in their war on the EPA on Thursday: The GOP majority is now waging war on the Clean Air Act.

One of the most enduring accomplishments of Republican President Richard Nixon, the Clean Air Act is a popular and effective law. The EPA estimates that the act saved 160,000 lives in 2010 alone, and projects that the new standards targeted by these bills would prevent up to 9,000 premature deaths annually. As a result, policies to ensure clean air enjoy wide support in both parties and all regions of the country. A recent nationwide poll, conducted by Hart Research, found respondents favor air pollution protections by 60 percent to 22 percent. Three out of four people believe that the EPA, rather than Congress, should set air pollution standards.

But in Washington, industry interests have prevailed over popular sentiment among House Republicans, who voted almost unanimously in favor of both bills. The communities most affected by industrial pollution stand to suffer most from the bills now going before the Senate.

Consider the example of Dallas Republican Joe Barton, a co-sponsor of HR 2681, which delays cement regulations. Barton's history of fighting environmental regulations prompted the Dallas Morning News to label him “Smokey Joe.” He has relied on industry ever since a cement company funded his college education. According to data found on the website Dirty Secrets, Barton has accepted a total of $3,068,365 from companies that stand to benefit from his efforts to roll back environmental regulations, including more than $100,000 from cement manufacturers.

Barton represents Texas’ 6th District, just south of the Dallas-Fort Worth area, which encompasses the town of Midlothian. Known as the Cement Capital of Texas for its three cement plants, the town would be affected by HR 2681’s elimination of the limits established by the EPA to control toxic emissions from cement plants. Midlothian residents who have been raising public health concerns for years welcome the new regulations, but Barton and other industry supporters argue that increased regulation threatens 600 jobs at the plants -- even though evidence shows that regulation doesn’t kill jobs. Indeed, residents of towns like Midlothian have been presented with a choice -- however false -- between jobs and health for years.

Alex Allred, 46, is an author and teacher turned clean air advocate by her experiences living in Midlothian. Her 2-year-old son started suffering the effects of severe asthma a few months after moving to Midlothian and over the next few years was hospitalized multiple times, to the point where he was in danger of being held back in kindergarten because he’d missed so many days of school. When a doctor at the Children’s Hospital in Dallas looked at her son’s file, Allred says, he said, “Oh ... you live in Midlothian."

Tom and Julie Boyle, a couple with three children, were avowed conservatives who found themselves making common cause with environmentalists as the mounting evidence of harm became too much to ignore. In 2005, Boyle wrote: “I believe my family is at risk. And we talk about leaving ... If I must err, I’ll err on the side of my children.” When Julie was diagnosed with cancer a few weeks later, they finally decided to leave Midlothian for good.

Sue Pope, a rancher and horse breeder in Midlothian, founded the organization Downwinders at Risk when her family’s horses stopped breeding and her neighbors’ animals began to suffer health problems. She eventually stopped breeding horses in 1994, saying: “It was just too sad. We decided we shouldn’t create more problems, and we [she and her husband] were both ill at the time.”

Allred says that many people in Midlothian know something is wrong but feel resigned to the way things are. “Half the time people don’t even realize that something being burned is hazardous. They know that it gives people headaches and that there are a lot of people with rare cancers and babies with Down Syndrome around here, but I don’t think people really understand how bad this stuff is.”

Of course, these are anecdotes -- no individual case has been definitively linked to industrial pollution. But it’s well-established that emissions from cement plants, including arsenic, chromium, lead, mercury and dioxins, cause a range of health problems, including asthma, cancer and birth defects. Moreover, one of the plants near Midlothian -- TXI, the largest of the three -- also burned hazardous waste up until 2010, and is currently applying for a permit to burn other types of waste, including plastics and car parts.

Epidemiological studies of Midlothian have turned up worrisome data. A preliminary symptom survey undertaken by researchers at the University of Texas in 1998 found the risk of respiratory symptoms in Midlothian was up to 34 percent higher than in other areas of Texas. A 2006 study found that people in Midlothian were 5.3 times as likely to have severe asthma than the rest of the Texas population, and 4.3 times as likely to die from it. A USA TODAY report analyzing industrial pollution in schools using EPA data found that two of Midlothian’s elementary schools ranked in the first percentile for toxic exposure, and another two ranked in the third.

Some dispute these findings. Boyce Whatley, the mayor of Midlothian, expresses concern about emissions, but charges that the EPA is “premature in pushing through legislation as opposed to letting the science dictate policy.” Whatley says that Midlothian’s air quality has been tested more than that of any other city in the state and found to be safe. He cites a series of studies and tests carried out by the Texas Commission on Environmental Quality (TCEQ), the Texas Department of State Health Services, and the CDC’s Agency for Toxic Substances and Disease Registry.

However, environmental advocates say those studies are flawed and point out that the commission often sides with polluters. The liberal Texas Observer labeled it the “Agency of Destruction.” An investigative report from the Dallas Morning News documented the “clout of heavy industry” in the commission's work. The TCEQ has also altered scientific reports to fit its political agenda. As Mother Jones recently reported, the agency even edited all mentions of climate change out of a report on sea level rise to conform with Perry’s denialist stance.

Perry and his predecessor George W. Bush appointed a string of pro-industry commissioners, many of whom go on to work for the polluters they were regulating after leaving office. The current head of the TCEQ, Bryan Shaw, recently published an Op-Ed decrying EPA legislation designed to lessen cross-border emissions on the grounds that it would harm Texas’ economic growth -- never mind the fact that the EPA is not permitted to take economic considerations into account when making decisions about health and safety.

The pro-industry sentiment is widespread. Mayor Whatley says, “We’ve seen so many of our jobs exported because of overbearing regulation from the EPA in particular,” though he did not have evidence to support this claim. (In fact, research indicates that environmental regulations rarely result in outsourcing.) Midlothian City Council member Wayne Sibley told me he wasn’t familiar with the bill before Congress but said he wouldn’t support more regulation of cement plants because they’re “already getting all kinds of regulations.”

Clean air advocates argue that industry is perfectly capable of reducing emissions without going out of business -- and indeed, it’s done so in the past. Says Matthew Tejada, the director of Air Alliance Houston, “We’re just seeing the same knee-jerk reaction that we’ve seen for decades when industry is asked to react to the evolution of the Clean Air Act.” Indeed, environmental and public health advocates argue that regulations can actually create jobs.

But such arguments have made little headway with Texas officials. Even stories from their constituents have failed to garner support. When Allred became convinced her son’s asthma was the result of environmental pollution, she figured she’d bring the matter to the attention of her local politicians and get it straightened out. She soon learned it wasn’t so simple: “That’s when I found out how much the cement lobbyists really do take care of politicians. It’s just like a movie -- you can’t believe it happens that way, but it really does.”

Allred and her son flew all the way to Washington, D.C., to meet with Texas senators and representatives, only to be foisted onto an intern. (They ended up talking to Barack Obama, then a senator from Illinois.) Since then the Allreds have met with many House members to discuss clean air policies, but none from their own state.

“They’ve made it abundantly clear that they don’t want to have a conversation about how to fix the environment here in Texas," Allred said.

Allred says she’s given up even trying to get Texas legislators’ attention -- instead, she tries to work on a national level or work with clean air advocacy groups in other states.

“It’s kind of pointless to do it here in Texas,” she says. “Texas politics is Texas politics.” Most environmental advocates concur that the prospects for serious pollution standards in Texas are slim: industrial interests -- oil, gas, cement, chemicals, paper and pulp -- are just too powerful.

Both HR 2250 and 2681 are expected to be blocked in the Democrat-controlled Senate, and President Obama has said he’ll veto the bills if they somehow get through. Of course, it’s not exactly news that environment takes a backseat to the economy in Texas, or that Texas politicians are aligned with industry interests. But it’s worth remembering, as the war on the EPA continues, that the people in places like Texas -- people who can’t count on their state to provide even minimal environmental protections -- depend on federal legislation the most.

Tejada says that if the Congress rolls back the federal protections provided by the Clean Air Act, “we’re accepting this fact that a lot of areas of the United States that already have some of the most atrocious health standards, that already have elevated levels of disease and illness -- that we’re going to continue to sacrifice those people so that a lot of multinational companies can continue to make millions of dollars a quarter.”