As the world clamors for the latest upgrade, I finally resolve to surrender mine. If only it were that simple 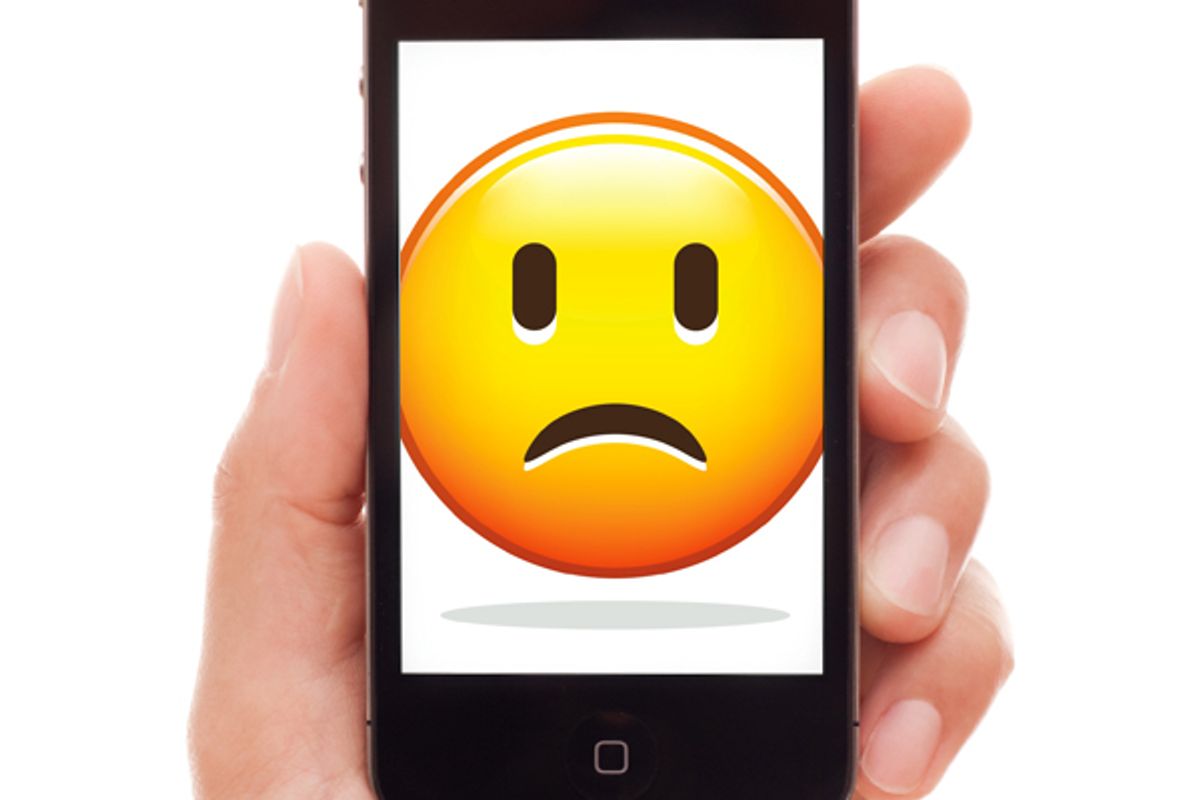 Last Saturday night at 10 p.m., I parked my car in the driveway, hustled myself inside as it began to rain, and locked the door behind me when I realized: I did not have my iPhone.

So weird. I'd just had it, like, 10 minutes ago, when I checked my voicemail at a friend's place. I started to call her to ask if it was lying around, which is when I realized: Not having an iPhone means you can't actually use your iPhone.

That night, even as rain pelted the windows, my home felt eerily silent. Like so many people, I do not have a separate landline, and I do not have cable TV. Without that small and all-powerful device within arm's reach, I was in exile. Typing emails on my laptop (because I still had wireless) seemed a bit like scribbling on parchment in the amber glow of an oil lantern. I would send the emails and receive nothing in response. Gah, is this thing even on???

The next morning, I walked out to the car to head to my friend's house when I discovered where my iPhone had been all night -- lying face-up on the driveway, inches from the driver-side door of my car, water still pooled on its black screen.

I thought I could save it. A friend who once dropped his iPhone in the sink told me rice sucked out the moisture, though it could take a while. I cradled the little guy in my hands and rushed it to the ICU of my kitchen, where I nestled it in a bowl filled with brown rice. (Nice to know that brown rice was good for something.) As the days passed, it languished, unblinking, in its starchy bed -- and my life without an iPhone began.

This is not one of those uplifting stories in which the author disconnects from technology but finds meaningful connection with the people in her real life. I'm not all that addicted to my iPhone, and it has never deterred me from long, deep conversations with other humans. This is also not one of those screeds wherein I tell you what a hideous, overhyped device the iPhone is. To be honest, I think the iPhone is the single greatest piece of equipment I have ever owned, and though I was reluctant to buy one, it took mere minutes to determine that I held in my hands the stuff of which history was made. No, this is a story about giving up an iPhone -- or trying to, anyway -- because the cost of keeping one had just become too high. That was my problem: I loved my iPhone, but I could no longer afford it. It was too much phone for me. I was like one of those homeowners sinking into debt, realizing too late they are heaping money into a sinkhole to pay for a life beyond their reach.

This is about my iPhone foreclosure. It didn't exactly go as planned.

It made sense, in 2008, for me to buy an iPhone. I was an editor who needed to check email often during the day and work on-the-go. I liked the way the iPhone looked, and what it said about me. It telegraphed to strangers that I was tech-savvy and fashionable and high-powered (though I was none of those things). But if I'm honest, I was also afraid of slipping into irrelevance. There is an anxiety in this hyper-connected digital age that you must adapt to new technologies -- or you will perish. You're not on Twitter? Enjoy your life as a dinosaur. You don't use Facebook? Welcome to 1988. And so I took a big cannonball dive into my fancy two-year contract and wished for the best.

But problems began to emerge. Not with the iPhone itself -- but with me. For all my phone's superpowers, for all its techno razzle-dazzle, I knew relatively little about how to use it. I texted, sure, and I could set the alarm. But I would guesstimate that I learned 10 percent of the iPhone's functions, maybe even less. It's like I had a magic wand in my purse, and I was using it to scrape glass off the windshield.

In July, when I reupped to my iPhone 4, I actually carved out an entire afternoon to figure out the sucker. But that afternoon came, and I was less interested in reading CNET stories than I was in listening to Marc Maron podcasts, one after the other, which I actually just streamed from my laptop. The iPhone might be capable of changing the world, but alas, it can't change me. There is nothing I find more deadly dull than an instruction manual. If I can't figure it out by tapping around for 10 minutes, it ain't gonna happen.

There were other issues, too. My having an iPhone was like driving an elegant horse-drawn carriage in the demolition derby. Mere weeks after purchase, I was texting as I walked past an elementary school one morning when my shiny new phone tumbled out of my hands and landed on the sidewalk with an unmistakable crunch. Little kids passed by me as I literally stomped my foot on the ground and said, for perhaps the first time in my life, "Oh fudge. Oh fudgety fudge." My gleaming, flawless companion now had a split right up its middle with two branches coming off it, like a line-drawn tree.

After I moved to Texas and shifted into part-time work, my iPhone bills started to climb. Frankly, they were staggering. I switched plans, but the next month the bill was even bigger. This was a problem, because financially, I didn't have much wiggle room. A year ago, I paid off and cut up several credit cards -- a slow crawl back from when they were maxed out, at 29 percent interest -- and I only purchased items with the money in my bank account, as opposed to simply purchasing items with the magical thinking that money would appear somewhere down the line.

I was still trying to scheme a way to pay those massive iPhone bills when the poor guy drowned himself outside, and I had to wonder: Why was I holding on to this thing anyway? Why was I going broke for a piece of equipment I didn't even know how to use? Since I'd started working from home, the only thing I really used my iPhone for was to talk. And that's the one function where the iPhone isn't all that great. I'm not just talking about dropped calls. Have you ever tried to hold the iPhone against your ear for long periods of time? It's like cuddling with a curling iron. The iPhone is for typing, for deep dives into Internet underworlds, for home videos and schedule management and working from the back of a taxi cab and tweeting quips about a ham sandwich to your 2,000 followers. If you want to lose three hours chatting with your friend on a Monday night -- not so much. And that's too bad. Because as the world grows more digital, an ever-percolating mix of emoticons and instant messages, I find myself drawn toward the warm sound of someone else's voice in my ear. Skype is just not my bag; I resent any device that draws attention to my shiny forehead.

So that was it: I had to give up my iPhone. It felt good just to say it. It gave me a jolt of consumer rebellion. I fired up my old iPod nano and pulled my cracked old second-gen iPhone out of the drawer to see if it still took pictures (it did). See, I didn't need a fancy new iPhone after all! I could make my own smart phone out of the misfit tools I already owned. I felt so practical, so boldly against the grain. I was leading a charge away from high-priced must-have doodads and back into the calm waters of clunky flip phones. I was going to save so much money. I was going to make a statement. My phone wouldn't say, "Ooh look at me, I have an iPhone!" It would say, "My phone doesn't define me. Also, I'm working part-time."

But the powers that be don't make it easy to give up your iPhone. In fact, they make it very very hard. When I arrived at the AT&T store, brimming with pluck, I was met by a friendly employee, his hair gelled into a perfect triangle.

"You know, thanks to a one-year warranty, you could purchase another iPhone for just $200," he said.

"That's OK," I said, smiling. I did not feel like explaining to him that a proper "warranty" would not involve paying the exact same amount you did in the first place. I did not feel like complaining to him about the injustice of the Apple empire, because I had a plan. "I've decided to downgrade to the flip phone for the rest of my contract. You can just give me your cheapest one."

He began to shift on his feet. His eyebrows started to flutter. "But those flip phones cost $200, too. Because you're not eligible for a new contract."

Wait, what? I had not anticipated this. It had never occurred to me that anyone would have the gall to charge $200 for a piece of machinery that was roughly as current as the horse and buggy. Shouldn't they be giving those away on the street to homeless people? "So wait," I said, trying very hard not to be That Customer, though my strained voice hadn't gotten the memo. "Those clunky old flip phones cost as much as another iPhone would?"

He nodded. It was silent, except for my sighs. "You could look on Craigslist," he said finally. "If you find an AT&T branded flip phone for sale, you could use that."

Great. Just what my afternoon didn't need -- freaking Craigslist. Now I was going to have to drive 60 miles into the suburbs to buy a Samsung that had been jacked from some poor old lady.

I rubbed my forehead. "How much would it cost to just cancel my contract?" I asked.

Oof. This revolution was getting awfully inconvenient. I had to wonder: How much did I want to pay for freedom from my iPhone? Would I be saving that much money in the long run?

Earlier that afternoon, I had dumped my old iPhone in my purse. Not the one that died, but the one I shoved in a drawer last July when I upgraded to my fancy new widget. I had this idea that I'd use it to take pictures from now on. It was clunky all right, the bottom half of the screen so shattered it practically turned everything into abstract art. I wasn't certain if I wanted to keep using it. But I knew I needed to get a cellphone -- some kind of cellphone -- today. Like, now. And so I sucked it up, and set it on the counter.

"And how much would it be to just power this up again?" I asked.

He smiled and clapped his hands together. "I could do that for you for free."