The Republican war on science is un-American

In a Salon interview, a top scientist warns the world is catching up in biotech. The GOP\'s hostility doesn\'t help 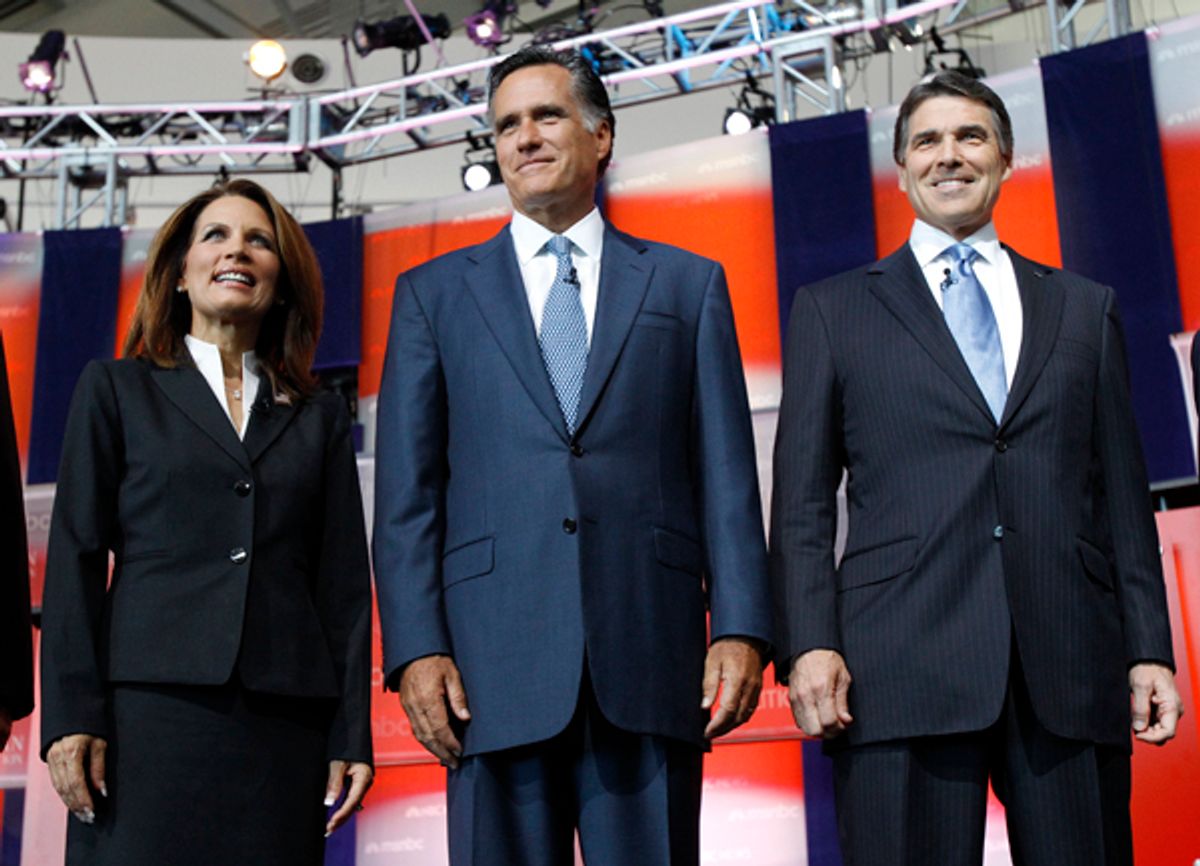 In his new book, “The Body Politic: The Battle Over Science in America,” (Bellevue Literary Press), Jonathan D. Moreno delivers an impassioned defense of scientific study. “The alternative to experimental confirmation is, in a word, dogma,” he writes. “Dogmatic statements may have many fine qualities. They may be beautiful, inspirational, and convey a kind of wisdom, or at least the impression of wisdom. But they can never be verifiable and self-correcting in the manner of science.”

This seems like common sense. But at a time when several presidential hopefuls are tirelessly trying to demonstrate their anti-science bona fides — Republican candidates have taken strange positions on everything from vaccines to evolution and climate change — Moreno’s book offers an essential dose of logic.

A professor of science and medical ethics at the University of Pennsylvania and a member of President Barack Obama’s transition team, Moreno talked to Salon about politicians who don’t understand science, how other countries are catching up to work being done in American labs and why Mitt Romney could be called a flip-flopper on a key scientific issue.

In your book, you call yourself a “bioprogressive,” and you describe this as the “century of biology.” What does that mean?

This is not original with me, but you can see the 19th century as the century of engineering, the 20th century as the century of physics. Historically, biology has been mostly descriptive: You go out into the woods and you categorize the flora and fauna. But now we’re actually mucking around with the basic building blocks. We’re in the information age: This all creates the opportunity for vast new sources of knowledge, wealth, power. We’re talking everything from industry to national security, but it also has a symbolic weight that engineering and physical sciences don’t have, because it is about life itself.

You write about the United States’ quest to retain its edge in biotech: “China, Canada, Australia, Taiwan, Singapore and South Korea are among those that have embraced the opportunity to create new markets and new wealth based on a biotech platform.” And you say that they’re catching up to American biotech studies. Is that a concern for the United States?

I think it is. In one sense it’s a danger because we have to be useful partners in the future of science. Many people say, “We have to be able to compete.” Well, it’s not just competition anymore, it’s also collaboration. Because science is globalized, if you can’t help a (scientific) team, if you can’t provide the depth and expertise that they need, they’ll go to somebody else. I think too often we see this as a matter of competition, but to compete in science in the 21st century, you have to be able to cooperate.

Why are other countries catching up?

They’re catching up because we had a completely unique situation from the end of the Second World War on. Everybody was bankrupt, and if they weren’t, they were poor. And if they weren’t poor, they weren’t a player to begin with. So we had an open field. It’s just incredibly striking how everything worked in our favor for the decades after the Second World War. For example, after the war the White House sent teams of experts in various fields of science and technology to walk through every science lab and every industry lab. American tire makers were interested in synthetic rubber, and we knew that the Germans had made synthetic rubber that was superior to ours. And we didn’t know how.

So we borrowed it.

Unencumbered by intellectual property concerns, we just took it. One of my favorite anecdotes is the fact the Elvis Presley was able to walk into this hole-in-the-wall studio, record two songs that sucked in 1953, and they said, “Oh, this kid’s nothing. But let him do another one.” He wouldn’t have been able to do that if not for the fact that Goebbels told BASF to make something better that he could edit his speeches on. So: magnetic tape.

Science has been in the news a lot lately, especially with the Republican campaign for president. Several of the candidates say they don’t believe in climate change, and Rep. Michele Bachmann made that senseless comment about the HPV vaccine. You’d think that these factless statements would be easy to refute, but as you write, “recent surveys show that over the past few years, the more people have heard about climate change, the less they believe it is happening.” How do we fix this?

The solution that my friends in the science policy world advocate is everybody in Congress should have a Ph.D in biology. A) That’s not going to happen. B) Scientists don’t necessarily have a great record running democracies. You think about who ran the central European countries, who ran the Soviet Union. They were mostly agronomists and hydrologist, engineers. You can be really smart and clever about systems, and still not be a big small-D democrat. C) I’d argue that these are cultural questions. These are not scientific questions. When a candidate raises his or her hand and says that he or she does not believe in evolution, they weren’t reading “Origin of the Species” last night in preparation for this debate. They are identifying themselves as a certain kind of person.

But it does have an effect. The New York Times had a story a few days after Bachmann’s HPV comments that said this could scare people away from having their daughters inoculated.

No doubt. And I’m not saying there’s not a heavy responsibility of political leaders to be smarter. But let’s understand the function of these statements first. They are not really statements about science or fact. They are statements about group identification — it’s a way of saying who you are. We have to grasp that, or we spin our wheels a lot.

You write that “science, understood as rational argument and demonstration, was also part of the constellation of ideas that gave the United States special promise; it is not too much to say that America is the only country founded by a group of scientists.” Yet some of the people who want to be president — people who claim to revere the Founding Fathers — are openly hostile to science. Where’s the disconnect?

I’m willing to go out on a limb and say the Founders would not approve of the statements that have been made with respect to science. Seeing science and innovation and demonstration and questioning, and coming to terms with reality — as ugly as it is, as lovely as it is, as complicated as it is — is all very American. There’s something un-American about not seeing that in the world.

Stem cell research is a core issue in the book. Maybe the last time some of us thought about this was in 2001, when President Bush discussed it in an Oval Office speech. Where are we now, both practically and politically?

In practical terms, because of what the Obama Administration has done, there are now dozens of stem cell lines that have come from embryos that have been donated with informed consent of the progenitors, which scientists will be able to work with around the world. What we’re learning about is how the earliest cells in bodies turn into all the cells in our bodies. The hope is that someday you could actually use your cells and turn them into some specific cell that you need to fix something. Will that ever be feasible? There’s a big debate about that.

Politically, I think it will not get back into the political conversation this cycle, but who the hell knows. (Republican presidential hopeful Mitt) Romney was in favor of embryonic stem cell research in Massachusetts before he was against it. Everybody’s talking about ObamaCare and RomneyCare, but one thing to look for is: Will somebody come up with a stem cell issue as a flip-flop for Mitt Romney?