The consumer capital comes to a halt as movement spreads to London, Frankfurt, Rome, throughout the world 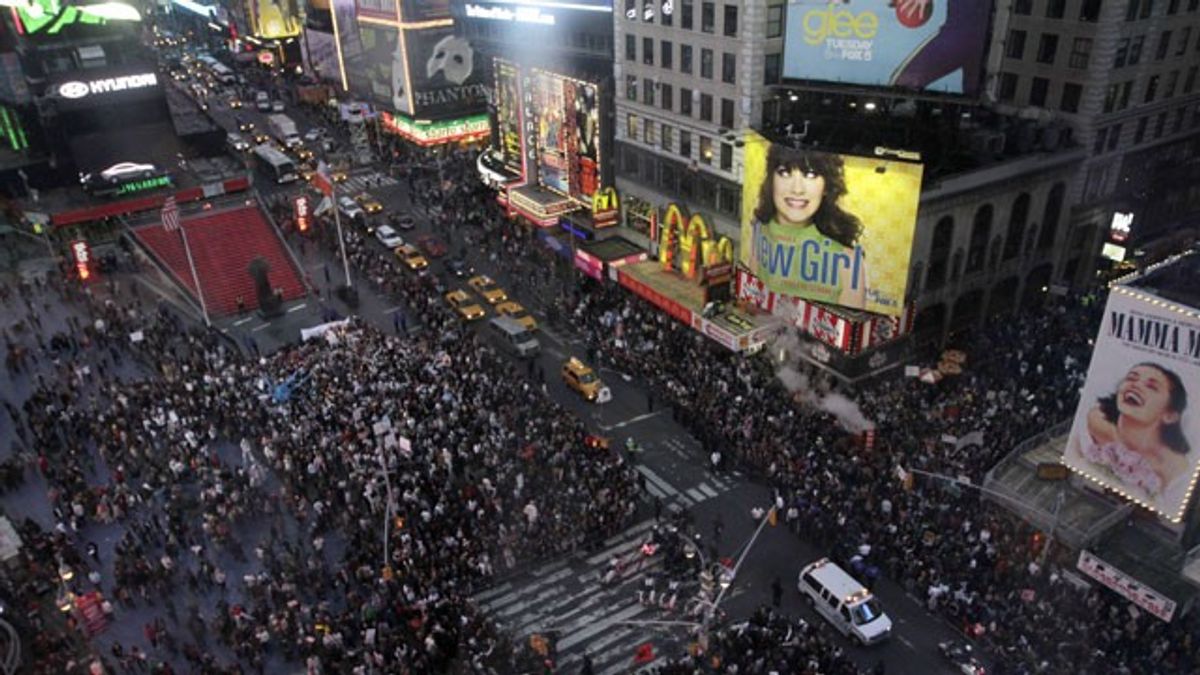 I was in Times Square Saturday as thousands of Occupy Wall Street protesters brought their anti-greed, pro-economic justice message to Manhattan's brightly lit temple of consumerism and corporate culture. The protest in New York occurred along with hundreds of other coordinated actions around the country and the world. Large affiliated crowds marched in London, Frankfurt, and Rome, where rioters hijacked a peaceful anti-austerity protest. There was a reported total of 900 protests in cities around the world, ranging in size. The day capped a month of exponential growth for a movement that started in New York on Sept. 17, and has since spread to nearly 2,000 towns and cities.

Here is a panoramic photo I took in Times Square Saturday. This is a single-shot view of the crowd, which largely stopped pedestrian traffic through the busy commercial hub for a few hours. I heard many of the chants from what has become Occupy Wall Street's repertoire:

"How do we fix the deficit? End the wars! Tax the rich!"

"Banks got bailed out! We got sold out!"

And there was the usual colorful collection of homemade signs, often scrawled on the back of broken down cardboard boxes.

"You're God damn right, it's class warfare!" declared one.  "I'll believe corporations are people when Texas executes one," said another. I saw Jesse LaGreca, who, after his interview with Fox News went unaired -- and viral, is now Occupy's first full-fledged celebrity. People were stopping him to pose for pictures.

It was a diverse crowd -- in age, aesthetic sensibility, and race. I bumped into Ted Actie, a Brooklynite and member of Occupy Wall Street's people of color working committee. He told me that the crowd at Zuccotti, which was more homogeneous in the beginning, has improved in terms of racial diversity.  "If we can't stop racism, genderism, ageism, and all the other -isms, then it's not going to work -- no matter what happens with the economy," he said.

The police presence -- usually significant in Times Square -- was as massive as I've seen it at any Occupy event to date. That includes police who may have been posing as protesters. I videotaped this man, with a walkie talkie in his belt and an "Occupy" T-shirt slung over his shoulder, casually chatting with two badge-bearing plainclothes officers. This video was taken after most of the march had cleared out of Times Square, in an area behind police barricades that was being kept strictly free of any protesters or members of the public.

Another video of the man is here. Some of the other apparent undercover officers were wearing orange wristbands. I asked the man with the "Occupy" T-shirt whether he was a police officer and he told me he was with "sanitation." I asked him about the t-shirt and he just smiled and shrugged. There were was no one from the Department of Sanitation in sight and no one cleaning the streets. I haven't seen any of the real protesters wearing branded "Occupy" clothing.

The NYPD, it's worth noting, has a history of sending officers into marches posing as protesters, drawing the ire of activists and civil liberties advocates. I've reached out to the department for comment and I will update this post if I hear back.

Despite no reported instances of violence by protesters, a reported 70-plus were arrested Saturday. The two primary rules officers are enforcing are the law banning groups of people wearing masks and the requirement that marchers remain on the sidewalks (a permit is needed to march on the street).

Here is a taste of the magnitude of the police presence in Times Square (click for full size): After spending a few hours in Times Square, word spread that the crowd was to head back to Washington Square Park. That is a city-owned green space surrounded by an up-scale residential neighborhood and NYU. It has been used for a few general assembly meetings because it is significantly larger than Zuccotti; it is also seen as a candidate for a second occupation. Attempting to sleep in Washington Square Park would almost certainly bring a confrontation with police because camping is prohibited in city parks.

While occupiers ultimately decided Saturday night not to attempt to sleep in Washington Square Park, there were several reported arrests and a large police presence.