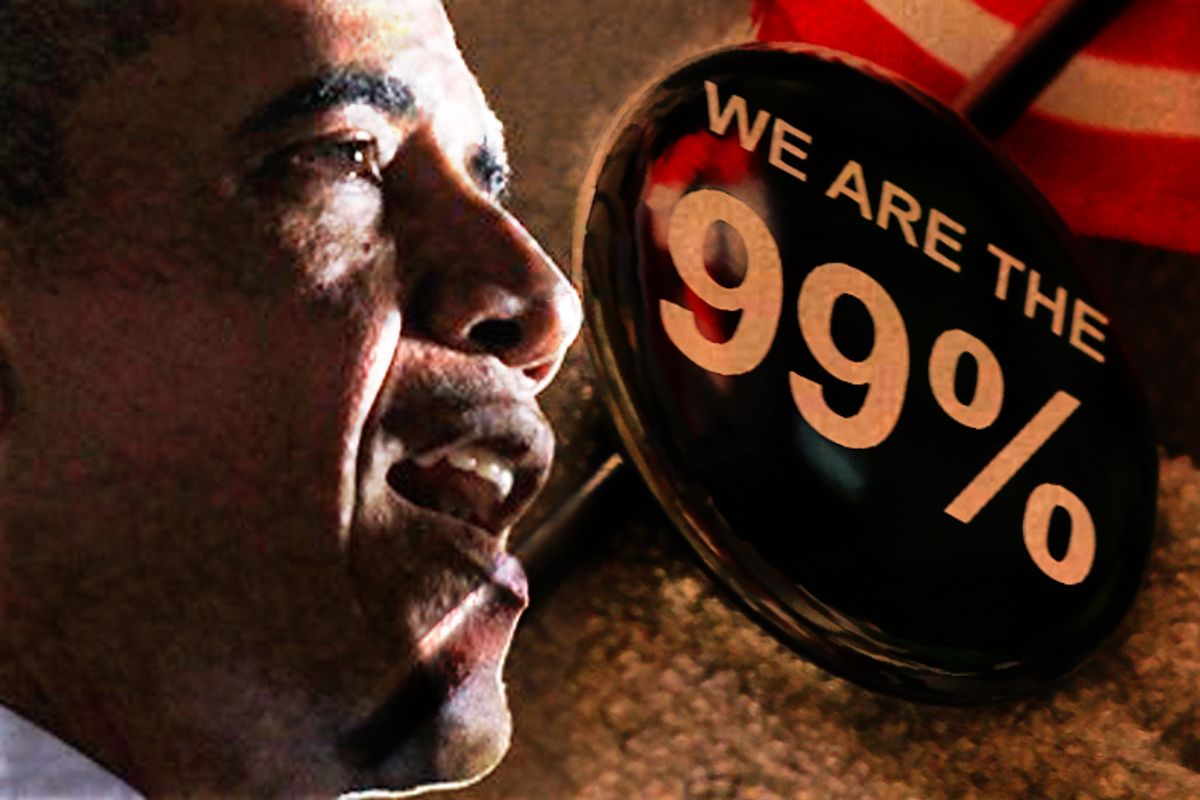 It appears that the White House is adopting what is probably the most powerful slogan of Occupy Wall Street: "We are the 99%."

That reference to the growing gap in income and wealth between the super-rich and the rest of us was invoked by a top administration spokesman during a press briefing Sunday about President Obama's bus trip to Virginia and North Carolina. Politico reports:

[Principal Deputy Press Secretary Josh] Earnest told scribes to stay tuned, adding that it was possible Obama would talk about the movement specifically but that he would acknowledge the "frustrations" of middle and working-class people who feel the rich haven't paid their fair share - or been penalized for the excesses that led to the financial crisis.

The president, he said, will make sure "the interests of the 99 percent of Americans are well-represented on the tour," the first reference I can find in which an Obama staffer specifically repeated the mantra.

Here's Press Secretary Jay Carney being quizzed on the same issue during a press gaggle aboard Air Force One this morning:

Q    How explicitly do you expect the President to embrace or echo some of the rhetoric of the Occupy Wall Street protest?  We heard Josh yesterday actually use the phrase, “the 99 percent of Americans.”  Might we expect to see the President move in that direction?

MR. CARNEY:  Well, I want you to listen carefully to what the President does say, so I won’t preview his remarks in any detail.  But I think we have expressed, and the President has expressed, an understanding of the frustration that the demonstrations manifest and represent.  There is a link between two things:  One, the frustrations that regular folks -- middle-class Americans feel about the state of the economy, the need for growth to improve, and certainly the need for job creation to improve.  And there is a related frustration that a lot of Americans feel about the idea that Wall Street in the past played by different rules than Main Street*, and now we have a situation where -- and yet was, for good reasons, was assisted by the federal government to prevent the financial sector from collapsing.

Following on that, there is frustration now I believe with the efforts by some to roll back the protections the President fought so hard to put into place through the Wall Street reform act that was passed and signed into law.  It is -- I don't have to imply or insinuate that it is the objective of the Republicans, including contenders for president, to roll back those reforms because they say so themselves.  And it's just inconceivable to us that an economic plan for the future would contain within it the elimination of reforms that would prevent the kind of financial protector collapse that we saw that created the greatest recession since the Great Depression.  Just doesn’t make sense to us.  Doesn’t make sense to the President.

I don't think anyone at Occupy Wall Street is satisfied by the anemic "Wall Street reform act" that Carney invokes here.

But we seem to be seeing an emerging White House strategy to adopt the language of Occupy without actually proposing any policy changes. Top Obama aide David Plouffe previewed this very strategy to the Washington Post a few days ago.

Gleen Greenwald has written at length about why this is going to be an awkward fit, to say the least.