An image of a protester apparently tackling a cop goes national, despite the majority's commitment to nonviolence 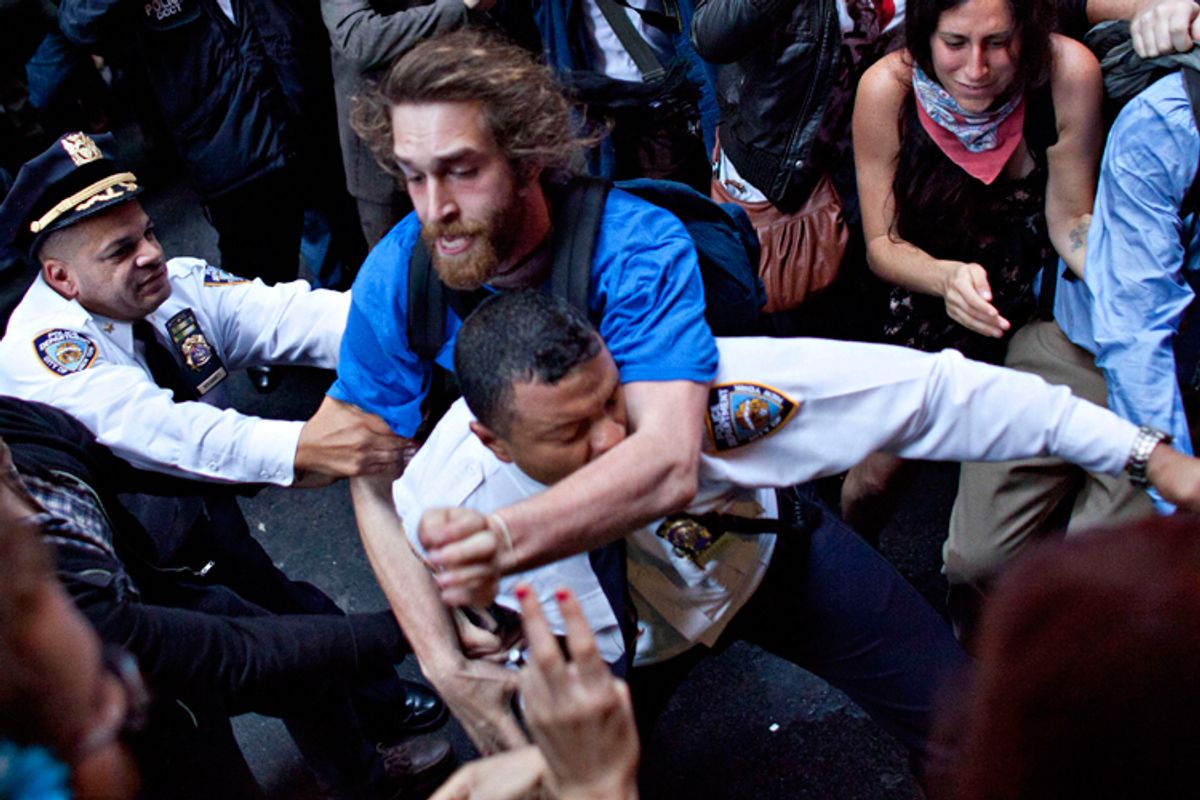 A man affiliated with the Occupy Wall Street protests tackles a police officer during a march towards Wall Street in New York, on Friday. The Washington Post published this photo on its front page Saturday. (AP/Andrew Burton)
--

On Saturday, the Washington Post splashed a photo on its front page of an Occupy Wall Street protester apparently tackling a police officer during a march Friday morning in lower Manhattan.

The newspaper chose an image of a bearded protester seeming to assault a cop to illustrate a movement that has been overwhelmingly -- almost without exception -- nonviolent. It ran the photo above the story, "Obama looks to harness anti-Wall St. angst." Critics of Occupy on the right have already seized on the photo.

After spending many days at Liberty Plaza in the past month and attending all of the major Occupy marches in New York, I have encountered a very small minority of protesters who seem less than committed to the principle of nonviolence. But I have never seen anything like the sort of apparent assault on a police officer that is shown in this photograph.

Neither, it turns out, has the photographer behind the image.

The photo was taken on a march Friday morning after a long, tense night in which protesters were preparing to be arrested en masse in Zuccotti Park following an eviction request by the company that owns the space. The company and City Hall, of course, abandoned their plan to "clean" the park at the last moment. That prompted a minority of the protesters to set off on celebratory marches in both directions on Broadway, which abuts the park and leads down to Wall Street.

Burton describes a "hectic, fluid, chaotic scene" in the run-up to the tackling photo, which went out on the AP wire and was published in newspapers around the country. "Conflicts between the police and protestors would flair up spontaneously, causing huge crowds to gather instantly, and then die back down just as instantly," he writes. That made it difficult for him to pin down the exact context on all of the photos he took that morning.

I was walking up the street when I suddenly heard a huge uproar from the crowd behind me. I turned around to see people gathering around 'something' and ran to the outer circle of the crowd. There was scaffolding on the sidewalk, so I climbed up onto it, maybe 3 feet off the ground. It was a very, very chaotic scene, and I put my camera to my eye and started firing off frames, not even fully sure what I was taking photos of, just near the center of the crowd. The instigating action that gathered the crowd had already taken place. As quickly as I climbed up on the scaffolding, their was a huge surge of movement in the crowd toward me and the scaffolding, and numerous people fell over, from the street, onto the sidewalk (to the right of the pole I had climbed). It was only after I went to edit that I learned someone had tackled a police officer, which caused the surge of people towards me. So to be clear, I didn't see the moment I photographed inside my camera - I noticed it later. I did see lots of people then fall onto the sidewalk through my camera. I can't speak for why the man tackled the police. I don't know if he was arrested or not.

Whatever happened in this particular episode, the vast majority of occupiers I've interviewed -- as well as their allies on the outside -- are both committed to the moral principle of nonviolence and realize images of assaults on police or destruction of property could hinder Occupy's reputation and prospects for growth. "This is a nonviolent march!" is one chant I've heard more than once.

"Something else this movement is doing right: You have committed yourselves to nonviolence," wrote Naomi Klein in an address to Occupy Wall Street. "You have refused to give the media the images of broken windows and street fights it craves so desperately. And that tremendous discipline has meant that, again and again, the story has been the disgraceful and unprovoked police brutality. "

The words were particularly meaningful coming from Klein, a veteran of the '90s-era movement against deregulated globalization that became known for WTO protests in Seattle that were marred by vandalism (even if only a small number of protesters were responsible).

I've observed elements in Zuccotti Park who seem set on unnecessary confrontations with police in ways that go beyond civil disobedience. Around 11 p.m. on Oct. 10, for example, a small band of about 60 or 70 protesters set out on an impromptu march toward Wall Street. This was not endorsed by the general assembly; there didn't appear to be any plan. There was no apparent media presence besides myself and one other reporter.

The group seemed to be led by a few overexcited young guys wearing Anonymous masks or bandannas over their faces and included many people bearing red-and-black anarchist flags. (A couple of photos from the march are here.) The marchers were much younger on average than those sleeping in the park. Some of them appeared to be well under 18 and simply along for the thrill. Marchers walked aimlessly through the streets around Zuccotti, banging on the roll-down metal gates that protect storefronts after hours. At one point, for no apparent reason, a young man wearing red and black broke a large wooden police barrier and threw it in front of a car stopped at an intersection on Beaver Street. No police officers witnessed this moment; I'm certain he would have been arrested had the NYPD been around.

Eventually the march attracted a large contingent of police officers who occasionally ventured into the crowd to threaten people with arrest for wearing masks. The group ultimately wound its way back to the park without any major incidents. But I could imagine these adventurist types causing problems for Occupy Wall Street down the line.

"When you have such a grass-roots movement, those people are going to come," said Ted Actie, one of the early participants in Occupy, when I asked him about the incident. "You can't do anything about it. We can tell the media that's not Occupy Wall Street. Ninety-nine percent of it is nonviolent."

It's also worth noting that the massive police presence in lower Manhattan has created a sense of besiegement among protesters. And the balance of the reported violence has been by the police, with the pepper-spraying several weeks ago, the punching of a protester on Friday, and the use of batons, including even on a local Fox journalist.

On the protester side, one person was charged with assault earlier this month for allegedly knocking an officer off his scooter. Felix Rivera-Pitre, the protester decked by a police officer Friday, is himself being sought for charges of assault on an officer because the NYPD claims he tried to elbow an officer in the face (though this is not shown on any video of the episode). Rivera-Pitre denies doing anything of the sort.

An NYPD spokeswoman told me that the department has not broken down the arrests by type of alleged crime, so full numbers on violent crime charges are not available.

In this video taken Friday morning, a protester appears to start a scuffle with an officer by pushing against his motorcycle. The police then escalate matters and perform some fairly violent arrests. But it's clear that at least a few of the protesters are not fully committed to nonviolence. It's going to be the job of the majority of Occupy to keep them under control.

UPDATE: I asked Post Managing Editor Liz Spayd if she could shed light on the thinking behind using the tackle photo for the paper's front page Saturday. She responded that the photo was "the most original and the most newsy" of the options that day:

We've written several articiles and run numerous photographs in the paper and online from Occupy Wall Street protests. The vast majority portrayed the  animated but generally peaceful demonstrations you describe. The one we ran last Saturday was a powerful, vivid image of a protester clashing with a policeman. Of all the photographs we looked at that day, it was the most original and the most newsy. The cutline made clear there were only 15 protesters arrested, a small number given the total crowd. We remain highly interested in this movement and its potential political power in the future.

I should add that I've tried unsuccessfully to identify the protester in the photo. If you know who he is, please email me at justin@salon.com.

UPDATE II: There has been some speculation among commenters that the Tackling Man protester did not actually tackle the police officer, but rather was captured falling. He appears to be visible at the :23 mark in this video trying to help Felix Rivera-Pitre, the protester in the green shirt who was punched by a cop. This doesn't fully clear up what happened, but it appears to be another view of the chaotic scene.

UPDATE III: Rivera-Pitre tells Salon that the man in the blue shirt was merely trying to help him after he was punched by an NYPD officer.