Suspense, atmosphere, gore: This series is aces in every department but one -- the characters are obvious and dull 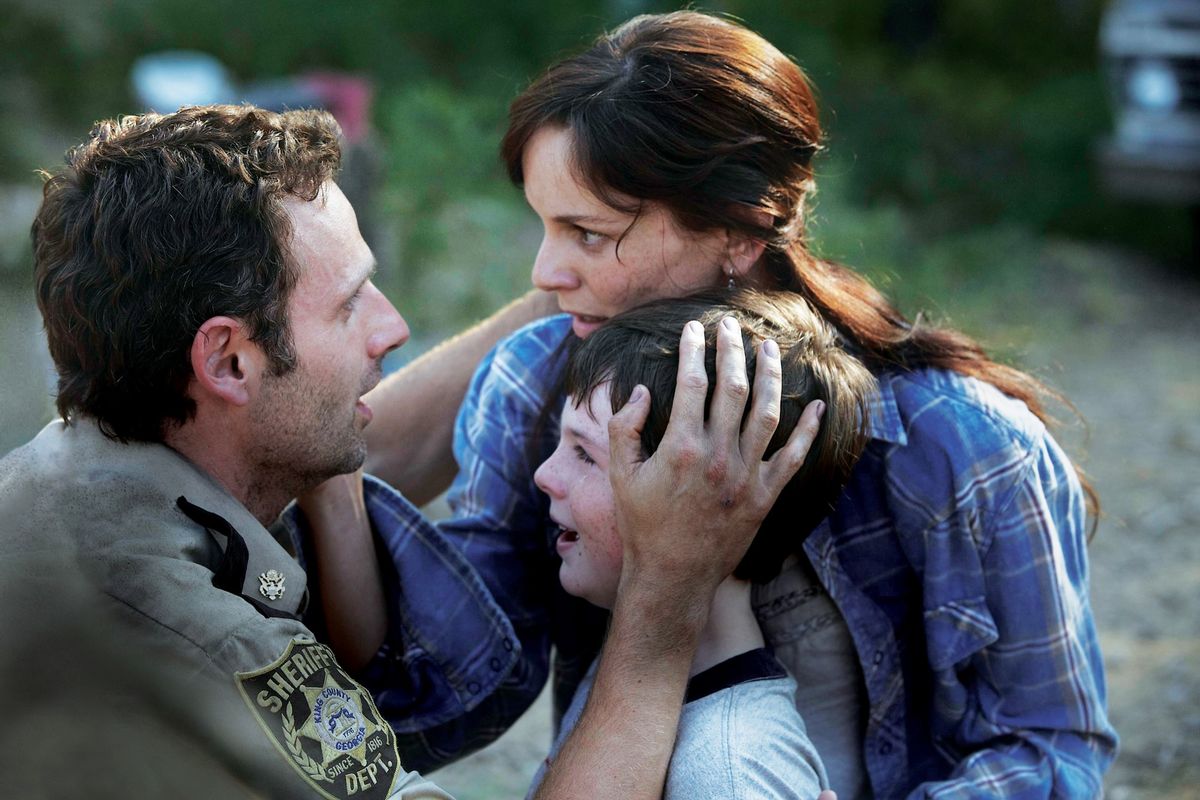 This article contains spoilers for the season two premiere of "The Walking Dead." Read at your own risk.

"The Walking Dead," which returned for a second season last night on AMC, is a frustrating show. It has everything it needs to be great: a compelling premise (humans fighting for survival in a ghoul-infested world), expertly constructed suspense scenes, gore that's horrifying even by the already-inflated standards of the zombie genre, and a knack for exploiting series TV's greatest strength, its elasticity of time. The sequence in last night's premiere in which Rick (Andrew Lincoln) and his hardy band hid beneath stalled cars on a highway to avoid a herd of zombies shambling through was one of the tensest action scenes I've seen on TV; it was all the more impressive because it wasn't so much about what was happening to the characters, which was already horrifying enough, but what might happen to them. The drawn-out pacing in this sequence -- and in others, such as the group's search for the disappeared little girl Sophia (Madison Lintz), and the gradual walk-up to the church, with its John Donne bell tolling for thee -- was a sterling example of old school classical filmmaking. I even like the show's didactic arguments about ethics and morality, which has always been the zombie genre's main reason for being anyhow.  In a post-apocalyptic world, the phrase "do unto others" takes on a different meaning. The sorts of arguments you see on "Walking Dead" have to happen in zombie stories, just as they had to happen in "The Lord of the Flies" or "The Road" or any disaster narrative -- though admittedly they could be a lot more elegantly conceived, so that you don't see them coming and think, "Now would be a good time to do the dishes."

No, the show's main problem is its lack of compelling characters. It isn't a question of whether or not they're "likable." They are likable. If they lived on your block you'd say good morning to them, maybe even invite them to a party. That's the problem, actually -- they're likable to a fault. More specifically, they're "relatable," to use a favorite Hollywood studio executive buzzword that I despise -- a word that doesn't mean "recognizably human, with glaring contradictions and faults," but something more along the lines of "thoroughly decent but slightly fuzzy characters who would be bloodless ciphers if they weren't played by professional actors."

The actors on "Walking Dead" are professional, often very skillful, but as we head into Season 2, it's becoming increasingly clear that they can't make these characters interesting, because they're too thinly conceived. My initial enthusiasm for this show had everything to do with the genre, the concept and the mostly strong execution; in retrospect I was way, way too patient with the characters, maybe because I assumed they were going to show me new and troubling shadings that still haven't materialized.

Rick; his wife, Lori (Sarah Wayne Callies); and his son, Carl (Chander Riggs); Rick's former colleague and secret romantic rival Shane (John Bernthal); grey-bearded Dale (Jeffrey DeMunn) with his "On Golden Pond" hat; even burly T-Dog (IronE Singleton), are all just so damned decent, so obviously striving to do the right thing at every possible second, that I'm already kind of tired of them. (They're mostly TV-pretty and Caucasian, too -- a point that the wounded T-Dog addresses in an upcoming episode when he notes, "I'm the only black guy here.") Click over to Steven Spielberg's lavishly budgeted sci-fi series "Terra Nova" on Fox -- or better yet, don't -- and you'll see a similar strategy at work.

When a network or studio is spending boatloads of money on a sci-fi or horror or other genre spectacular, there's great pressure to center the action on characters whom "everyone" can relate to, meaning the upper-middle-class white folks prized by advertisers. That often results in a core cast that would fit right into a sprightly 1940s western about homesteaders, or a 1950s sitcom with a pipe-smoking dad and a mom who vacuums in heels. The heroes are likely to be guys like Rick, who looks like a human action figure and whose worst quality is that he wants so badly to be a hero and rescue everybody that he sometimes makes bad calls, or Shane, who likewise presents as a Rick-like do-gooder. (For some reason, Jon Bernthal's performance exudes untrustworthiness; I keeping hoping he'll turn out to be a conniving and selfish character, the kind of guy that the young Burt Lancaster or Kirk Douglas might have played back in the day. The moment where Shane takes aim at the clueless Rick in the woods, then notices Dale watching him and lowers his rifle, suggests that Shane has that potential -- but really, does anyone think "The Walking Dead" has the guts to go down that road?) I hope that poor little Carl survives being shot at the end of the premiere not because he's an interesting character, but because he's a cute kid.

Yes, I know, "The Walking Dead" takes most of its characters and situations from a graphic novel, as detailed in this Salon piece by Simon Abrams. But adaptation is all about making choices of what to keep and what to change; the source material in this case is hardly "Dune," or even "Harry Potter"; recently-ousted show-runner Frank Darabont and company could have swapped out most of the main characters, or at least deepened or complicated them or jumped away from them for long stretches, without sparking audience revolt. Anyone who's watching this show doubtless has prior experience with zombie pictures -- or what I call "zombie-by-proxy" pictures, which avoid the undead angle but which are otherwise textbook examples of the genre -- so they're used to seeing genuinely quirky, even off-putting characters navigating a monster-infested universe. I hardly think they'd tune out if the show served up a similarly spicy array of mixed nuts.

The original "Dawn of the Dead" and its 2004 remake, "28 Days Later," "Day of the Dead," "Land of the Dead," both versions of "The Crazies," "28 Weeks Later," "Dead Alive," "Shaun of the Dead," "Zombieland" -- all these films and others offered a more lively array of main characters than "Walking Dead." Yes, when you watch a zombie film, you're likely to encounter milquetoast straight-arrow hero-types and generic best buddies and significant others, but also people who were hopelessly deluded, or so paralyzed by grief and fear that they're no help to anyone including themselves, and comic relief characters, and stalwart average guys like Brendan Gleeson's burly dad in "28 Days Later," and even straight-up sociopaths who are secretly thrilled to be living in Hobbes' State of Nature, and who only pretend to be working on behalf of the group. And what would a zombie picture be without at least one lazy, grousing, hilariously nihilistic dirtbag, like the smug yuppie played by Ty Burrell in the 2004 "Dawn of the Dead"? ("You know, I would love to help," Steve says, justifying his laziness, "but the captain never works alongside his men.")

Remember early last season when the main characters encountered that group of gangbangers who were caring for citizens of a nursing home? I loved those characters; why didn't we see more of them? Late in the season, when the show suddenly jumped away from the main story line to give us an extended flashback of Noah Emmerich's Centers for Disease Control researcher trying and failing to develop a cure, my heart jumped, not just because Emmerich is a fantastic actor, but because the show was giving me a change of scenery and putting me in the head space of a different character. Emmerich had just one more episode to go, alas.

The only recurring "Walking Dead" characters I find truly interesting are the irascible or alienated ones who harbor socially unacceptable attitudes -- the characters who are obviously only there to contrast with Rick and Shane and Lori and Dale and the other Nice Folks and eventually become "civilized" or otherwise "likable." I'm fascinated by Andrea, who insisted on personally shooting her own kid sister, Amy, when she turned zombie, and who has become withdrawn and faintly self-destructive in the aftermath. (There's a reason why no one wants her to have a gun.) Laurie Holden, the actress who plays Andrea, enacts grief and anger in a subtle, stingingly real way. She's off-putting in the way that real trauma survivors are off-putting. I like the way she looks at Rick and Lori and the others, as if she knows they're posers who are ultimately no more emotionally together than she is -- and that if she weren't in such a vulnerable place, she'd tell them so.

My favorite regular character, though, is Daryl Dixon (Norman Reedus), the crossbow-toting hillbilly white supremacist whose brother -- a vastly more unpleasant redneck psycho played, inevitably, by Michael Rooker -- (maybe) bought it in Season 1. Daryl is a walking rebuke to Rick, a Dudley Do-Right type with a cleft chin and trooper hat; he's the kind of guy that a cop like Shane would enjoy arresting, and who would mysteriously manage to "accidentally" bang his forehead every time he got shoved into the back of a squad car. I don't know if Daryl would make an altogether better leader than Rick, but when you're wandering around a landscape populated by flesh-eating ghouls, there's something to be said for an unsentimental demeanor and a ruthless streak. (The show seems to be softening Daryl, too, though; there's nothing like a zombie plague to make you reconsider your prejudices.)

Rick's big speech to the Jesus statue at the end of the Season 2 premiere encapsulated the show's character problems. It was one of the most awkward and unconvincing moments in the series' run to date -- and not just because the show had already communicated everything Rick (and Sophie's mother, Carol -- played by Melissa Suzanne McBride) had to say about God's indifference to human suffering and the uselessness of Jesus' message in zombie-world by rack-focusing from Rick splattering a walker to the Christ statue hanging on the church wall behind him. The church sequence needed to push much, much further than it did; instead of communicating a good man's despair over not being able to do more good (which already comes through in every scene Rick plays), I wanted to see the self-pitying, martyr side of Rick come flooding out; I wanted to see hints of the deeply screwed-up fury that drove Matthew Fox's character on "Lost" -- selflessness as a manifestation of vanity and fear of worthlessness. When Rick killed two walkers with stones early in the episode, we saw a hint of giddy blood lust in his face, but the episode didn't follow up on it. Has "Walking Dead" decided not to explore Rick's latent potential for darkness for fear of making him "unlikable," or somehow not "relatable"?

Whatever the explanation, there was more complexity and power in Daryl's tossed-off exit line at the end of the zombie church showdown, when he glared over his shoulder at the Jesus statue and muttered, "You take requests?"