He wants to fold the movement into his reelection campaign. What does he think it is, the Tea Party? 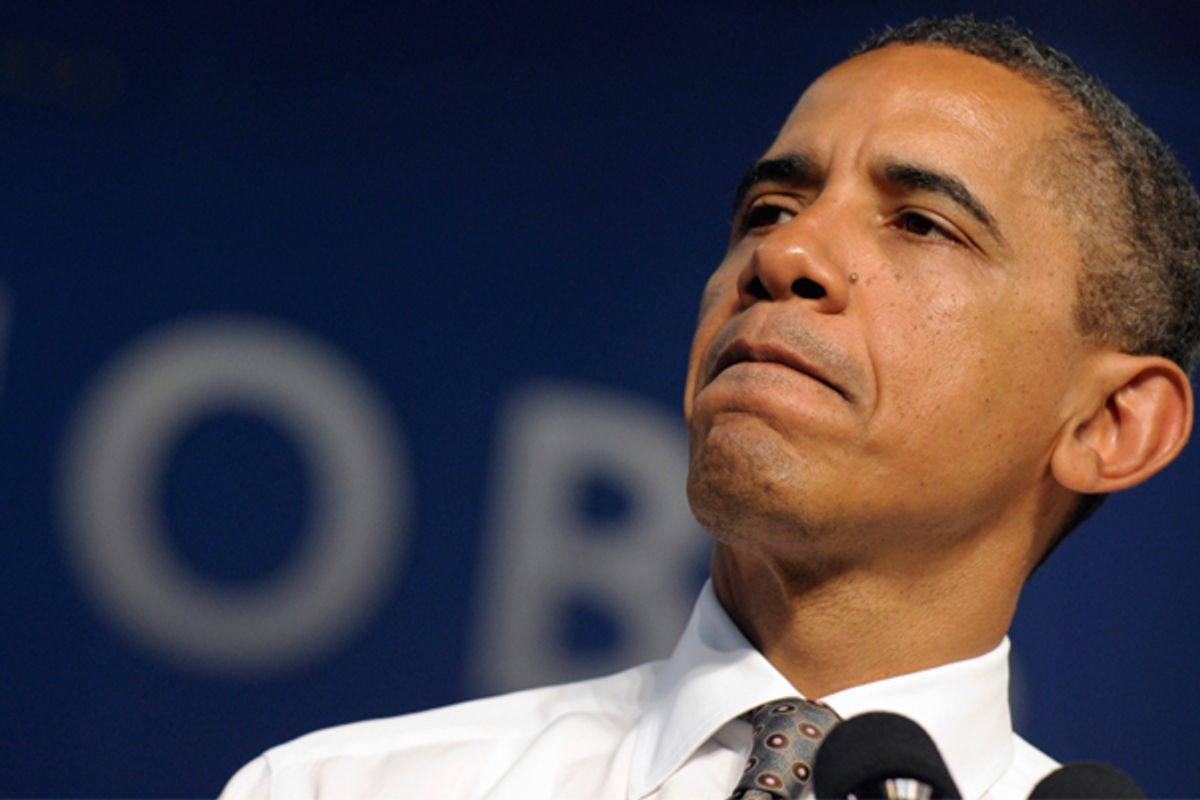 Over the weekend, Barack Obama's political team made it clear that they hope to channel the energy of the Occupy Wall Street movement into the president's reelection campaign. And now we're beginning to see what, exactly, they have in mind.

Launching a three-day bus tour in North Carolina on Monday, Obama went after congressional Republicans for blocking action on his jobs bill and for producing legislation that focuses mainly on easing government regulation of business. "It turns out the Republican plan boils down to a few basic ideas," Obama declared. "They want to gut regulations. They want to let Wall Street do whatever it wants." Presumably, this is just the start and Obama will be looking to exploit other openings to portray the GOP as Wall Street's protectors, a strategy that is consistent with the White House's goal of drawing attention to Republican obstruction of popular and urgent reforms.

This is the promise of the OWS movement for Obama: that it will focus the public conversation -- and public outrage -- on Wall Street and the culture that created the Great Recession, with Obama and his party reminding Americans over and over that Republicans bitterly resisted the post-meltdown bank reform law and are ready to repeal it if they win back the White House. This could be particularly useful if Obama's opponent ends up being Mitt Romney, who is quickly emerging as Wall Street's preferred candidate.

But if Obama is counting on receiving a more direct political boost from OWS, he may be in for a disappointment, because there's reason to believe that OWS is rooted much more in a broad frustration with America's political and economic systems than in simple partisan politics. In this way, it is fundamentally different from the Tea Party, the movement to which it has been endlessly compared, whose energy has been easily steered into electoral politics.

Just consider the roots of the Tea Party, which sprang up almost as soon as Barack Obama took office. At first, no one was quite sure what to make of it, and some treated as a nonpartisan uprising of fed-up political independents. But this was wrong. Tea Partiers were overwhelmingly likely to be conservative Republicans; Democrats and genuine independents were virtually nonexistent in their ranks. In fact, besides the name, there really wasn't much new about the Tea Party. It was just the latest example of the fierce, emotional right-wing backlash that we've come to expect whenever a Democrat wins the White House (especially if that Democrat also enjoys congressional majorities).

In other words, the Tea Party was -- and is -- a basic partisan phenomenon. Just like they did with Bill Clinton back in 1993, conservative leaders and activists resolved from the moment he took office to regard Obama as a far-left radical whose presidency would threaten the republic. The only way to respond was with bitter, nonstop resistance. It's true that the Tea Party wasn't officially launched by the GOP, but as soon as it gained prominence, conservatives leaders saw it as an ideal vehicle to advance their anti-Obama agenda and began promoting it to the conservative masses.

Since the movement's sympathizers tended to be freshly-energized Republican voters intent on stopping Obama, it was easy to set an agenda: If Obama was proposing it, the Tea Party was against it. And it was easy to channel that agenda into electoral politics: Vote against insufficiently pure Republicans (the ones who might be tempted to help Obama on a key vote) in primaries, and vote against all Democrats in the fall. Granted, this produced some bizarre contradictions. Tea Partiers, for instance, professed undying rage over the Wall Street bailout (and even punished some Republicans who voted for it), but when Obama began pushing for tighter regulations aimed at preventing another Too Big Too Fail moment, Republican leaders formed an alliance with Wall Street to fight him -- and the Tea Party was happy to go along. Dodd-Frank, the reform law that was ultimately enacted, has been criticized for not going nearly far enough, but the Tea Party is now committed to its repeal.

The roots of OWS are different.

For one thing, it's a broader movement, at least for now. A poll released by Time last week found that 54 percent of Americans say they have a favorable view of the protest movement compared to 23 percent who have an unfavorable view, making OWS far, far more popular than the Tea Party. And while a Reuters/Ipsos survey found a clear partisan divide, with Democrats expressing a positive opinion of the movement by a 51-11 percent margin and Republicans expressing a negative one by a 44-22 spread, it also found that OWS is viewed favorably by a strong plurality of independents. Polling also reveals deep, bipartisan anger toward Wall Street, broad support for prosecuting executives who played major roles in the meltdown, and a widespread belief that the gap between rich and poor is too vast.

GOP leaders are encouraging their rank-and-file masses to view OWS with hostility, and they may ultimately succeed in driving down the movement's overall popularity and making it seem more like a partisan Democratic cause. But even if they do, that doesn't mean that the voters who are left sympathizing with OWS will function as energized, partisan Democrats in 2012. Conservative Republicans embraced the Tea Party label in response to the other party winning the 2008 election. But the Democrats and Democratic-leaning voters who are now expressing support for OWS are doing so while their party controls the White House and the Senate.

This suggests that what attracts Democratic voters to OWS goes much deeper than simple partisan loyalty. After all, as Glenn Greenwald noted last week, there are plenty of reasons for OWS supporters to conclude that Obama -- who, don't forget, was Wall Street's candidate in 2008 -- and the top Democrats in Washington are guilty of enabling Wall Street's most destructive behavior and of paying too much lip service without action to the cause of "the 99 percent." This may be what is drawing many of them to OWS -- a belief that even well-meaning leaders of their own party are no match for the forces that really call the shots in America. If that's the case, then Obama will need to do more than point fingers at Republicans if he wants to turn OWS into his own Tea Party.