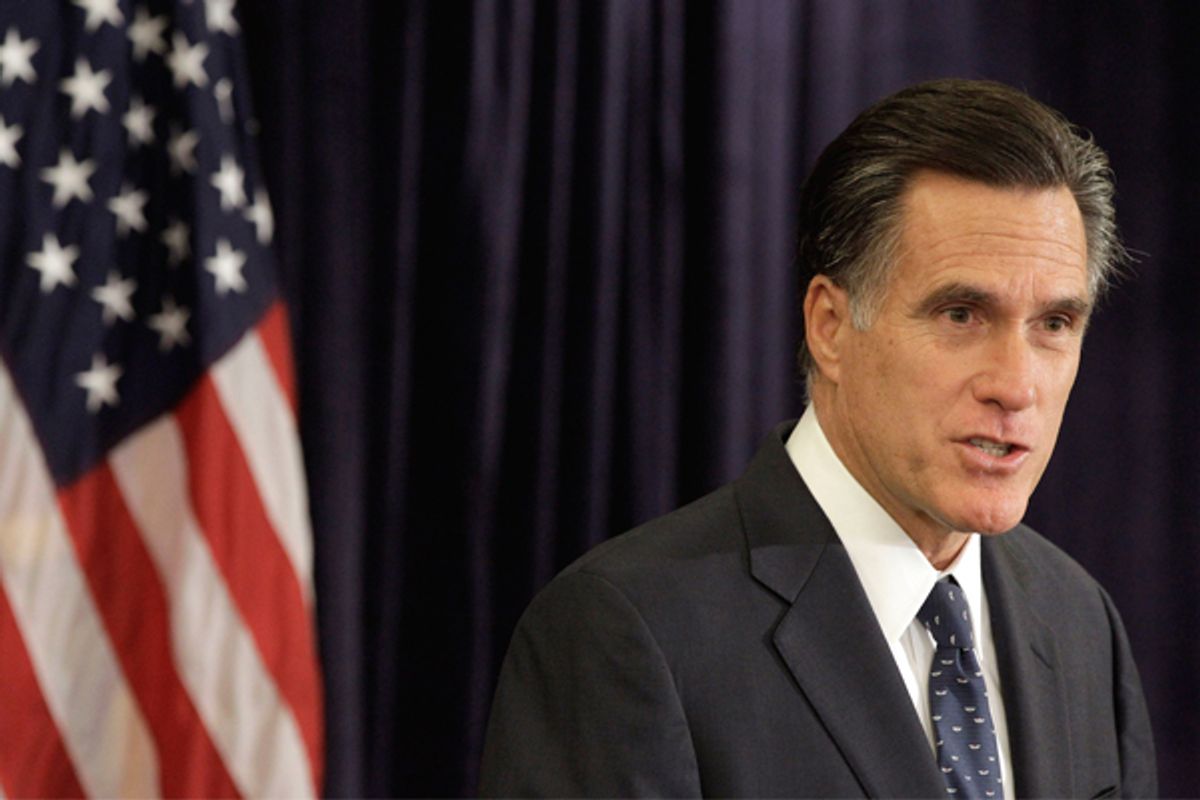 When it comes to the key early contests in the GOP race, New Hampshire is generally considered Mitt Romney's firewall. He nearly won the state in 2008, and the relatively small influence of Christian conservatives in its Republican electorate along with his next-door neighbor status makes Romney a logical favorite this time around. Polls have confirmed this; the most recent survey puts Romney at 39 percent, with the surging Herman Cain back at 24.

But now comes some potential trouble, with Republicans in the Granite State demanding that Romney boycott the GOP caucuses in Nevada, the other early state where he is well-positioned. Romney is refusing, and some of the most influential locals are getting angry.

At issue is Nevada's current plan to hold its contest on January 14, which New Hampshire's political leaders regard as a threat to their cherished first-in-the-nation status. The problem is that Iowa has scheduled its lead-off caucuses for January 3. New Hampshire would like to set its primary for a week later, on January 10, but the fear is that the impact of the results will be diluted if Nevada's caucuses take place just four days later. An old New Hampshire law designed to protect the primary states that it must be scheduled seven days before any "similar" event; consequently, New Hampshire's secretary of state is now threatening to move the date back to early December.

Most observers regard this as an empty threat, which may be why Republicans in the state are now trying to use their leverage with Romney to force Nevada to back off. Case in point: an editorial in today's Manchester Union-Leader, a fiercely conservative paper with significant influence in New Hampshire Republican politics, slamming Romney for continuing to campaign in Nevada (where a debate will be held tonight):

What this effort suggests: Romney is willing to sacrifice an institution beneficial to the republic (the New Hampshire primary) for his own political advantage. For the Nevada move weakens all 2012 candidates not named Romney and threatens all future New Hampshire primaries. Whether New Hampshire goes in December or in January with Nevada only a few days behind it, the tradition is broken, and other states will be emboldened to move in for the kill in 2016.

Of course, Romney could put New Hampshire voters’ minds at ease about his commitment to the primary and the value of selecting candidates the old-fashioned way. He could join the Nevada boycott.

Or not. Either way, New Hampshire is watching.

Romney doesn't seem to be blinking, though, and there is a chance that Nevada will eventually back down -- especially since it's also receiving pressure from Republicans outside of New Hampshire. But if the dispute drags on and the Union-Leader and other influential Republican voices in New Hampshire ratchet up the heat on Romney, it could cause problems for him. At least that's the lesson from a similar impasse back in the 1996 cycle.

Back then, it was Delaware and Arizona that were seeking to move in on New Hampshire's status. Initially, Arizona scheduled its primary for the same date -- February 20 -- that New Hampshire was planning, with Delaware announcing that it would go four days later, on February 24. New Hampshire's leaders swing unto action, demanding that all of the GOP candidates denounce the Arizona and Delaware moves and refuse to participate in their primaries. Most candidates, including front-runner Bob Dole, Lamar Alexander, and Pat Buchanan went along. But Phil Gramm, who was initially perceived as Dole's chief threat for the nomination, balked. Gramm apparently believed that the dispute would be resolved quickly and felt that, since they'd be voting early (whatever the exact date), it was in his interest to compete in Arizona and Delaware.

This proved to be a miscalculation. When he launched his campaign in early '95, Gramm had hoped to ride his staunchly conservative, anti-tax economic program to a New Hampshire victory. At his campaign launch, he was joined by then-Senator Bob Smith and former Governor Meldrim "Axe the tax!" Thomson, a hero to conservatives in the state. Gramm believed he'd be able to win over the Union-Leader and then-Governor Steve Merrill as well.

But the Arizona/Delaware drama ended up dragging on months, through the fall of 1995 and into early 1996, creating a distraction that made it difficult for Gramm to gain traction in the state. Merrill urged him, publicly and privately, to join the boycott, but Gramm didn't, one of the reasons Merrill ended up backing Dole. The Union-Leader, which missed no opportunity to remind its readers that Gramm's actions were threatening their influence in national politics, ended up championing Buchanan. And Gramm's fellow candidates took plenty of shots; Buchanan delighted in telling New Hampshire crowds that Gramm had sent his regrets from Delaware.

Gramm never got off the ground in New Hampshire, even though his message was probably a good match for the state's GOP electorate. Despite all of the early hype and his considerable war chest, Gramm struggled to break out of the low single digits in polls in the state, encouraging the national media to conclude that his campaign was in decline. And he had a similar problem in Iowa, whose status was threatened that year by Louisiana. Only Gramm and Buchanan contested the February 6 Louisiana caucuses, with Buchanan scoring a surprising win. That outcome nearly finished off Gramm, who nabbed just nine percent in Iowa the next week, good for fifth place. He dropped out after that, failing even to make it to the New Hampshire contest he once believed he'd win.

Granted, there are some significant differences between Romney's current campaign -- and his position in New Hampshire -- and Gramm's in 1996, and Romney may be better positioned to absorb some criticism. But when it comes to protecting their primary, both parties in New Hampshire don't mess around -- something that Romney will be reminded of over and over the longer this dispute lasts.