Lauren Myracle's YA novel sounded similar to the book the judges selected. So she withdrew, like a real winner 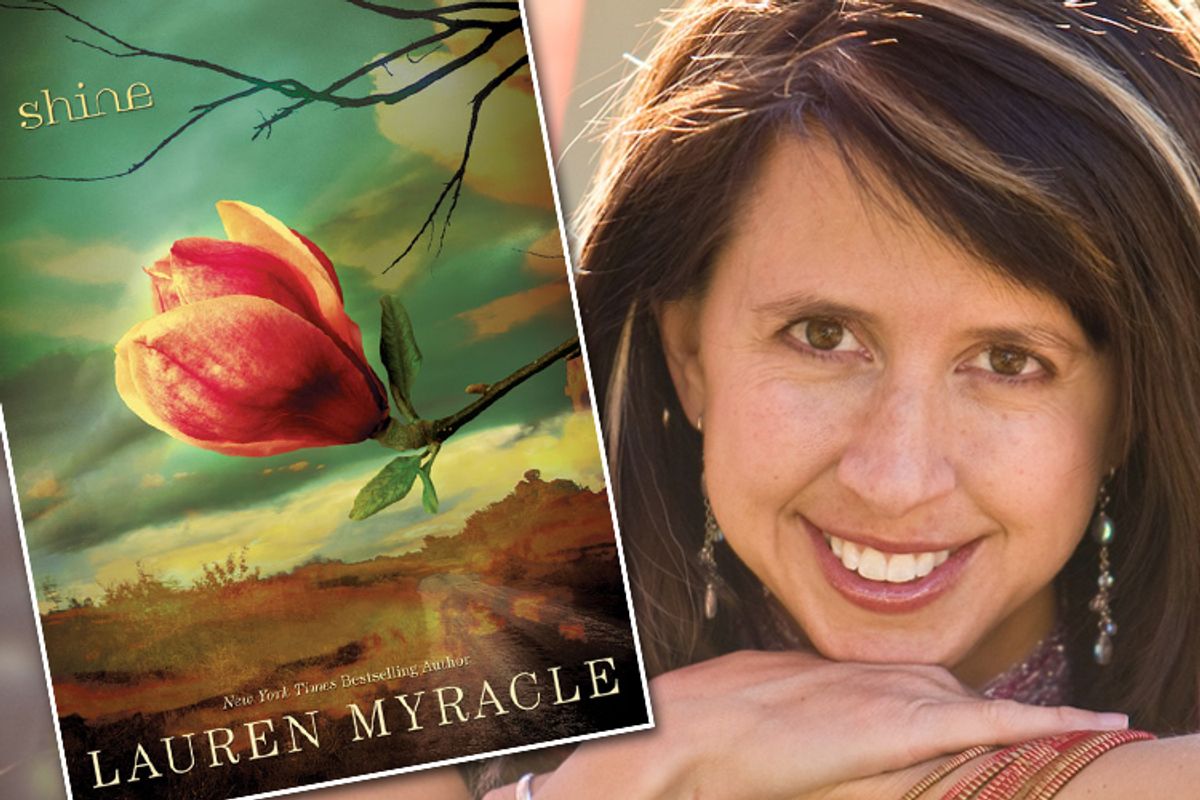 Lauren Myracle is accustomed to seeing her name on lists. The young-adult author, who frequently deals in the complicated, dark,  profane, and sexually charged vicissitudes of youth, can be found frequently on the New York Times bestseller list -- and the American Library Association's collection of the most frequently challenged authors. Her work is included on Anita Silvey's "500 Great Books for Teens." She's made Booklist's roster of Top Youth Romances, and the ALA's list of Best Books for Young Adults.

So when her gritty novel "Shine" was listed as one of five National Book Award finalists last week, it seemed a crowning recognition for an acclaimed novelist. Later that day, Myracle tweeted her elation, saying, "I'm a lucky girl for SO many reasons…. I'm grinning BIG time!"

And then it all hit the fan.

The kids would call this a WTF? moment. It started when a sixth title, Franny Billingsley's "Chime," suddenly popped up on the list of nominees. In what will surely go down in the Alanis Morissette Isn't It Ironic Hall of Fame, it turned out that an organization devoted to the promotion of excellent books had a reading comprehension problem. The Foundation had unintentionally bestowed upon "Shine" the accolade meant for "Chime." Oops, they sound alike! Things got even odder from there. Though the Foundation initially opted to accept its own mistake and expand the field of nominees to six, it then swiftly reversed itself. In a statement, Myracle's publisher explained that Myracle "was asked to withdraw... to preserve the integrity of the award and the judges' work."

Myracle, whose novel centers on the wrenching aftermath of a hate crime against a gay teen, graciously did just that -- with one caveat. After Myracle's name disappeared from the list of nominees, the Foundation announced that "At her suggestion we will be pleased to make a $5,000 donation to the Matthew Shepard Foundation in her name." Meanwhile, Myracle has been a spectacular good sport, tweeting her "happy dance" congratulations for Billingsley and "Chime," and joking to novelist Gayle Forman that "SHINE can join the list of my other best-of 2011 books that were not nominated for an #NBA." And in the process, the author, who has in the past found herself in the past nearly left out of  the Scholastic Book Fair for her gay-friendly content and condemned in the Wall Street Journal for  themes of "homophobia, booze and crystal meth " and "language that can't be reprinted in a newspaper," is enjoying vindication among fans and fellow authors -- as the classiest participant in this whole fiasco.

As "My Life With The Lincolns" author Gayle Brandeis tells Salon, "Lauren Myracle has really been able to (forgive me) shine through the whole kerfuffle. The awards people asked her to step down to preserve the 'integrity' of the award, but she's the only one to show any integrity (and grace and humor) through the situation… I'm grateful that the Matthew Shepard Foundation is going to benefit from the mishegas (and I imagine Lauren Myracle will find many fiercely loyal new readers.)"

And Sarah Darer Littman, author of "Want to Go Private?," "Confessions of a Closet Catholic," and more, told us: "I've been a huge advocate for 'Shine' ever since I read it. I was thrilled when it was nominated for the NBA…. Then we heard there'd apparently been some confusion about the award, which must have been mortifying for Lauren...  a truly kind and wonderful author who deserves much, much better than this. That she has been asked to withdraw her book from the nomination 'to preserve the integrity of the award and the judges work' is reprehensible, and quite simply, a display of mind-boggling insensitivity on the part of the National Book Award Foundation and the judges. The only one who has come out of this affair with any integrity at all is Lauren Myracle."

In many ways, the NBA debacle sums up everything about Myracle's career. She is at once praised and has praise wrenched from her. She is lauded and kicked back down. Yet through it all, she goes about the business of resiliency.  So the National Books Award finalists is one list she won't be on this year. By turning bad fortune into something positive, she's already proven herself every inch a dazzling winner, raising money and awareness for a worthy cause,  supporting her fellow authors, and winning over a slew of new fans. That's even more than a victory -- you might just call it a miracle.