The new e pluribus unum: "We are the 99 percent"

Even the GOP is talking nicer about OWS. Can Democrats figure out how to support it? 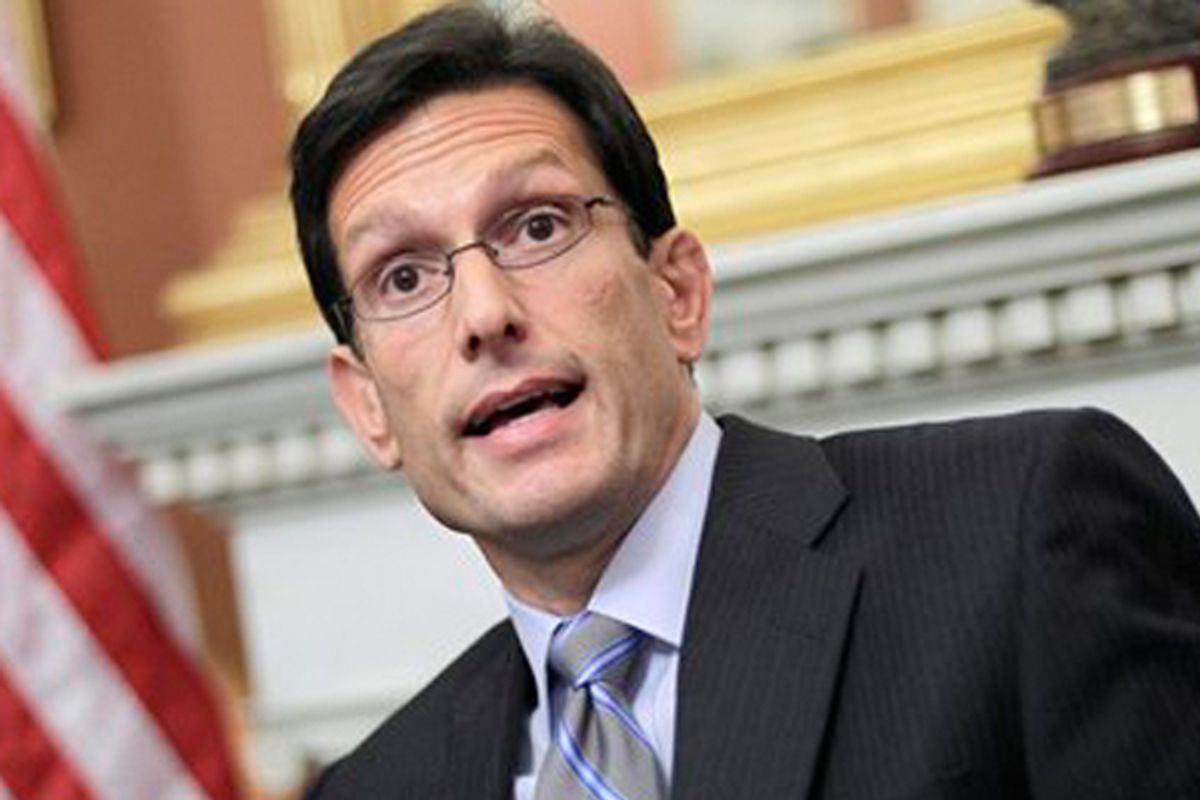 Wow, House Majority Leader Eric Cantor is running a little scared now. Ten days ago, he denounced Occupy Wall Street as a "growing mob." On Fox News Sunday, he softened his stance, agreeing "there is too much income disparity" and promising to work on getting the top 1 percent to create jobs and opportunity for the rest of us.

In fact, Cantor said Monday that he's going to deliver his very own speech on income disparity "and how Republicans believe the government could help fix it" on Friday. A spokesman elaborated: Cantor will talk about on how Washington can assist "a single working mom…a small business owner..and how we make sure the people at the top stay there."

Got it? We're going to address income inequality by making sure "the people at the top stay there." That sounds like a plan. A note of personal privilege here: This Cantor blog post lets me quote Charles Pierce on the same topic: "Cantor has demonstrated a remarkable ability to combine complete ignorance of practically every major issue with the unctuous personality of a third-string maitre d' at a fourth-string steakhouse." Best quote of the day.

Of course Cantor won't have a plan to address income inequality, because the GOP is devoted to maintaining it. More than 30 years of tax cuts and deregulation, ramped up by Ronald Reagan and put on steroids by George W. Bush, is exactly why the top 1 percent now has 40 percent of the wealth. That has to change to narrow income inequality. In fact, the only time the galloping pace of American economic inequality slowed was during the Clinton administration.

For all that President Clinton cozied up to Wall Street and presided over the repeal of Glass Steagall regulations on the banking industry, he raised taxes on the rich and he presided over an economy in which "income disparity" began to narrow, not widen, for the first time in 25 years. Between 1993 and 2000 real wages went up 6.5 percent; they'd gone down 4.3 percent through the Reagan-Bush years. Wages increased in every income bracket for the first time since the 1960s, as did family incomes. The poverty rate hit a 20-year low. Unemployment dropped to four percent; black unemployment, while still (as always) twice the white rate, dropped by almost half.

By contrast, Cantor's speech on Friday will be warmed over supply side economics, a combination of the same tax cuts and deregulation mania that created this problem and cannot solve it. But we should note, and enjoy, the political sea change that's led Cantor to at least mouth concern about "income disparity." In the latest Time poll, twice as many Americans, 54 percent, approve of the OWS movement as Cantor's Tea Party, which wins only 27 percent approval.

But what about the Democrats? Is it a given they'll benefit from the organizing of OWS? I don't think it's a given, and I don't think it should be. On MSNBC's "The Ed Show" I had the honor to follow Van Jones, founder of the Rebuild the American Dream movement, who expressed progressives' chagrin at being ignored by the Obama team, if not dismissed as "retarded," over the last three years. OWS is very wary of being co-opted by Democrats, Jones noted, and he suggested a better outcome was for the Democratic Party to be co-opted by OWS.

I echoed Jones, when Ed Schultz asked me. I honestly think progressive Democrats have a lot to offer in the way of solutions to the problems of the 99 percent, while the GOP offers zero. But I am a little uncomfortable with naked Obama campaign attempts to annex the movement. Yesterday deputy press secretary Josh Earnest told reporters that while on his current jobs tour, the  president will make sure "the interests of the 99 percent of Americans are well-represented." Jay Carney backed up Earnest by saying " I think we have expressed, and the President has expressed, an understanding of the frustration that the demonstrations manifest and represent." Carney suggested the White House could gain OWS support by defending its loophole-ridden Dodd-Frank financial reform bill. I think the White House ought to retool its message, because "Support Dodd-Frank" isn't likely to become a big placard at OWS anytime soon.

Let me acknowledge: I'm a Democrat. I believe deeply in voting, and voting for Democrats whenever they're not corrupt. I have many times defined myself as standing at "the left wing of the possible," the position staked out by "The Other America" author and democratic socialist leader Michael Harrington many decades ago. I admit I have biases here. I know the Democrats come far closer to proposing and supporting policies that might reverse the power of the top 1 percent than Republicans do. But I also see that OWS has done what the movements and organizations I've been part of failed to do: Create a unifying identity for Americans who support social and economic justice identity: the 99 percent. The American left has been fractured for so long, since before I was born, over sectarian squabbles, labor movement rivalries, the Vietnam War, race, class and gender. This is something new.

"We are the 99 percent" may be the new e pluribus unum, the slogan that helps Americans see what we have in common rather than what divides us. It's exciting, and we still don't understand it. I'm trying to. I've found it sad that a handful of vocal Obama loyalists have had a good time attacking my interview with Joe Diaz, the Occupy Atlanta activist who "blocked" interrupting the group's agenda to let John Lewis speak (while supporting his addressing the group during its agenda-slot set aside for public speaking.) I don't agree with Diaz on very much in terms of practical politics, as the interview made clear, but I'm glad I engaged with him, and that he engaged with me. I'm especially glad I didn't spew invective at him like some Obama supporters argue I should have.  At least one expressed horror at European violence in support of OWS, particularly Italy; I don't support violence, but the sight of Spanish protesters singing Beethoven's Ninth Symphony Saturday night (video below) gave me goosebumps. People who dismiss this movement in order to protect Democrats are to be pitied.

Ed Show video first, then the inspiring Madrid video. I'm sure I've got the order backwards.